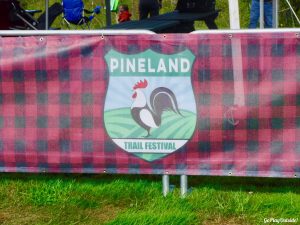 On May 26th, Frosty and I attended the Pineland Farms Trail Running Festival. The festival is a two day event Memorial Day weekend. Saturday features a 5K trail race, a 10K trail race, a 5K canicross race, and a 1K kids’ run. Sunday has long distance trail races, a 25K, a 50K, and a 50 mile race. 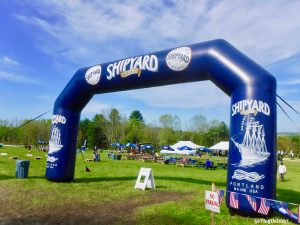 Frosty and I went on Sunday. We participated in the 25K. Notice that I used the word participated, rather than ran. We did run, but we walked as well. I did a lot more walking than Frosty and a lot more than I had originally planned. 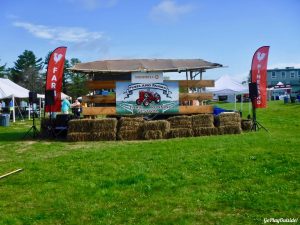 The Back of the Stage Was Set up for Photos

I thought parking might be an issue with over a thousand people signed up to run on Sunday, but it wasn’t. We did have to walk a short distance to get to the start/finish area. This area was also where bib pick up, race day registration, and race festivities were located. 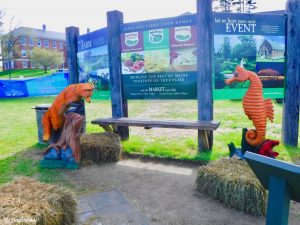 Frosty and I picked up our bibs and checked out the merchandise for sale: trucker hats, running hats, printed sleeves, additional race shirts, and 4 styles of race mugs. Then we walked around checking everything out. 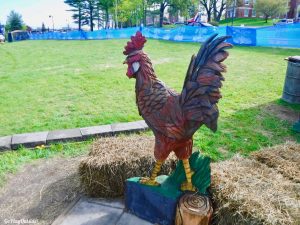 I had never been to Pineland Farms and the course map looked like tangled spaghetti. The course ended up being easy to follow. Yellow caution tape blocked off wrong turns, and the Mr. T signs that I had first seen running at Race Through The Woods alerted runners to wrong turns. One reason the course was easy to navigate for me was that there were so many people in the race. I always had someone to follow. 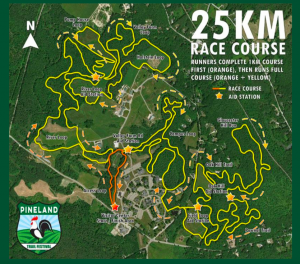 The day turned out much sunnier and warmer than what I read online the night before. I had thought the race conditions would be about 66° and cloudy with possible thunderstorms. Earlier in the week, the temperature had been predicted as even cooler with more of a chance of light rain. I had wavered between wearing leggings and a long sleeve shirt or shorts and a short sleeve shirt. I went with shorts and a short sleeve shirt. It got so hot though. I could’ve worn a tank top. The temperature got up to the low 80s! 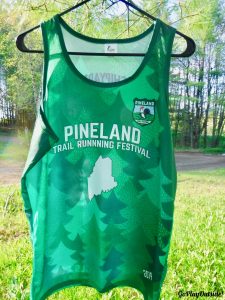 The Shirt Design Was Chosen by Participants in a Facebook Poll 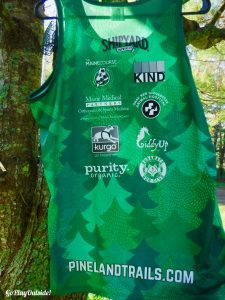 The sun and heat, while nice before the race, were too much for me during the race. I don’t function well in heat, and this spring has been so cool, I haven’t had to deal with it at all. 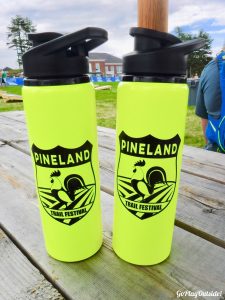 One saving grace was that many sections of the trail were shaded. Parts of the trail were out in the full sun in fields. Besides being uncomfortably hot, the field sections had some of the wettest trail. The trail had dry sections, mud, and shoe filling wet sections. The other saving grace was that occasionally, we were blessed with a beautiful breeze. We actually did get about a minute of very light sprinkles as well. People out on the course longer got some more significant showers. 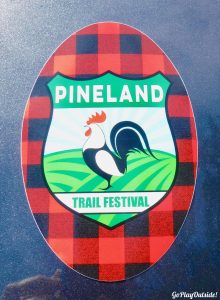 I enjoyed the scenery of this race. The wooded sections were nice. There was a mini waterfall near the beginning, a little pond,  and a small, round, stone building. The race was constant hills. Ups and downs prevailed with a few flat sections thrown in. Most of the trail was wide. There was a little double track trail and a few short snippets of single track (on the bog bridges). When I got to the bog bridges, some fast runners were on their way back from that loop. I waited and let them pass before going across the bridge. There were very few roots to contend with during this race. I loved running on the dirt road sections, which were the majority of the course. 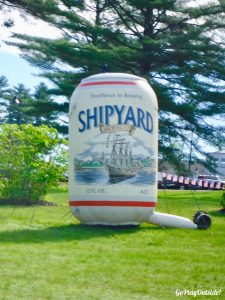 The aid stations were the best of any race that I’ve attended. They had water, Gatorade, Coke, pretzels, pickles, potato wedges with salt, Swedish Fish, Twizzlers, Oreos, peanut M&Ms, Succeed S-cap pills, Mountain Dew, watermelon, trail mix, Chexx Mix, fig bars, chips, oranges, humus wraps, PB&J sandwiches, and bananas. Workers would fill your water bottles, dump water over your head, or give you a popsicle stick of Vaseline (for chafing). One aid station worker was sharing her sunscreen with runners. My favorite aid station, at mile 11.7 of the 25K course, was decorated with a Hawaiian theme. They had grass skirts on, paper pineapples and other decorations, and were giving out leis to any runner that wanted one. This was one of only two aid stations the 25K course that we went by only once. 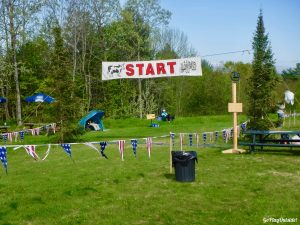 I stopped and spent time at the aid stations, as did many runners. I think the longer distances and casual trail atmosphere lead to this non-hurried approach. I stayed and had 1 to 3 drinks at every aid station, except the one that was a half mile from the finish. I also ate at the aid stations, which I have only done before at the Millinocket Half Marathon. I tried a few new foods from the aid stations as running fuel.  The Twizzlers worked out well for me. The peanut M&Ms didn’t float my boat while running. The Runners’ Guide said to throw all cups in the trash cans at the aid stations and that anyone caught littering could be disqualified. I took this seriously. Others didn’t or were unaware of this policy, which is different than many races. At one of the later aid stations there must have been 50 cups on the ground. 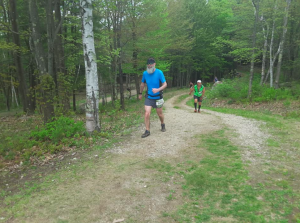 Frosty Power Walking up the Hill Photo by Allyn Genest

The Runners’ Guide sent out prior to the race had listed all the goodies that would be at the aid stations. I also knew that I would go by 8 aid stations. Knowing this, I chose not to carry any drinks or snacks. I thought I would be fine. This was a mistake. If it had been a cool day, I probably would’ve been fine. In the heat though, I got thirsty between aid stations and wished I had a drink. Especially in the first half of the race, when I was running more. The majority of the runners had a hydration vest, belt, or hand held bottle. 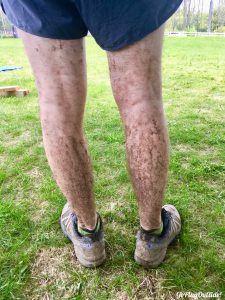 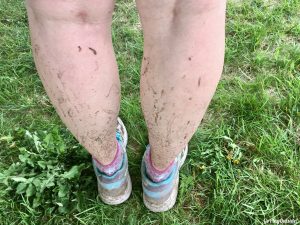 My Legs Weren’t Too Bad

There were a lot of walkers or at least part time walkers in this race. Many of the racers were walking the ups and running the rest. That had been my plan going in, but the heat put the kibosh on those plans. I walked a lot, much more than just the uphills. Some participants walked the entire thing. That made the race very friendly. I was with my tribe of slower people. No worries about aid stations waiting for you to go through so that they could pick up, or sweepers waiting on you to finish. With the 50K and 50 miles races happening, the aid stations and workers knew they were in this for the long haul. There were cut off times, but the 25K people had plenty of time. 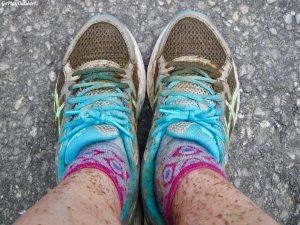 Everyone’s Shoes Were Wet and Muddy

I was really dragging the later into this race I got. The last third of the race, the balls of my feet were experiencing a dull burning. I’m not sure what was going on, but my theory was that my feet didn’t enjoy rubbing on wet socks. I’ve hiked in wet socks for an entire day before while section hiking and didn’t get this sensation. But what else could it be? Anyway, it made it uncomfortable to run. Walking was slightly better, but not much. 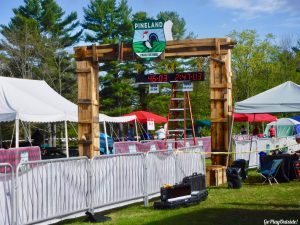 There was a man with a megaphone cheering on runners about two tenths of a mile from the finish. He lifted my spirits. Soon after I saw Frosty, who had finished almost a half hour before me. He cheered me on, too. 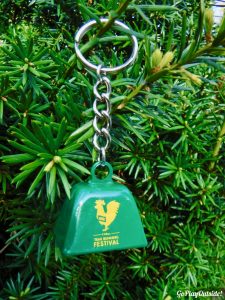 I was so glad to finish! I was so wiped. I couldn’t do my usual strong surge to the finish. I ran as best as I could across the finish. I’m sure I looked like a overcooked egg noodle flopping toward the finish line. 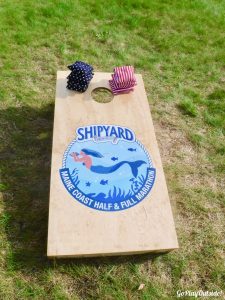 The finish area was festive. A band was playing, games of cornhole were going on, and everyone was enjoying food and beverages. Racers got tickets on their bibs for 2 Shipyard beers and a slice of pizza. Runners also got free admission to the food tent. Organizers provided hot dogs, hamburgers, and sausages with all the fixings. Runners were asked to bring side salads and desserts. We brought a double batch of chocolate cookies with salted caramel chips. 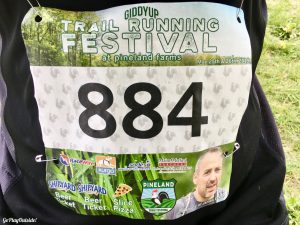 The Race Bibs Were in Memory of James Eckert. The Beer and Pizza Tickets Were on the Race Bibs.

I needed to rest and recover a bit before I could eat. When I was ready, my plate was heavy on desserts! While eating, a shower passed through. It lasted a little longer than I thought it would, but it did clear up. We stayed partly dry under the table umbrella. 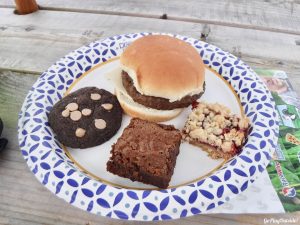 I Got to Have One of the Cookies I Brought

We were both fighting colds that Squirrel had given us, but we pushed through it. I was pleased to have accomplished my first 25K and was very proud of Frosty and his time. Despite my struggles, I did enjoy this race. 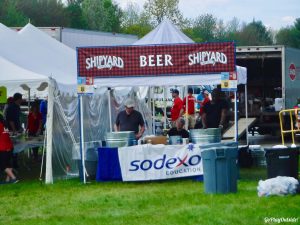 Runners Had a Choice of Shipyard Beer Varieties

It is interesting to note every runner seemed to be talking about their running watches reporting the distance as longer than the course was supposed to be. This was a main topic of conversation at the finish. I know the watches/phone apps aren’t always exact, but with so many people having the same results leads me to believe the course was off. I had read there was a course change this year which may have contributed to this. My watch clocked the distance at 16.5 miles. 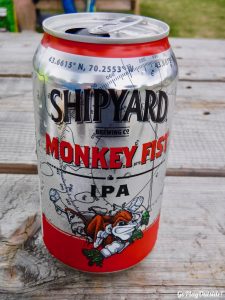 Someone mentioned the mileage difference after an aid station. I checked at the next aid station, the only places that had mile markers. Sure enough, my watch listed the distance as a mile more (14.2 miles) at the 13.2 mile (for the 25K) aid station. That was a little disappointing given that I was struggling a bit at this point. 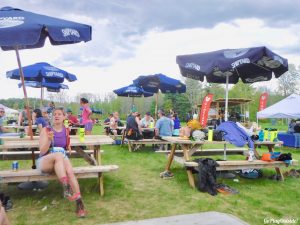 Frosty’s official time was 3:45:02. My time was 4:11:04. I was hoping to finish in under 4 hours, but I realized that wasn’t going to happen half way through the race.  Overall, this race had a lot of positives, and I enjoyed it. Next year, hopefully they plan better and have enough cowbells for everyone, not just the fast people. 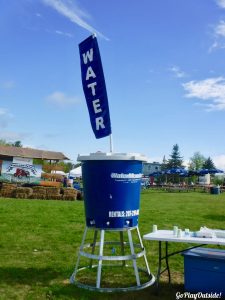 The Water Was Cold! Yeah! 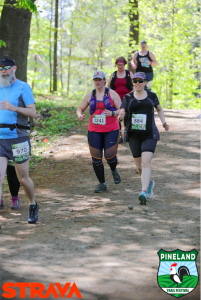 Frosty and I at the Start of the Race 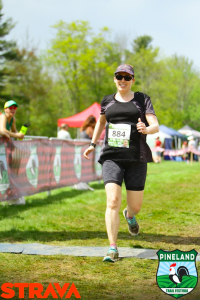