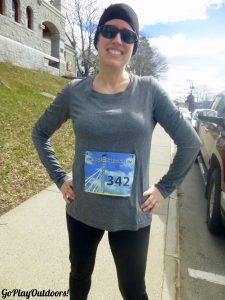 Magoo after the 2017 Bridge the Gap Race

In February of 2017, I began to think. Hmm, I’d like to try running. I had never run before. I had never even had the desire to run before. But, the last week in February, I started running on my treadmill. I also signed up to run a 5K on March 25th. The race was a month away.

Signing up for the race kept me motivated and kept me from putting off my running. I couldn’t give up. I needed to run that race. I needed to achieve my goal of finishing that race.

I practiced about three times a week, but not on consecutive days. I worried about hurting my knees. It was hard to run at first. I would start by walking for 5 minutes. Then I would increase the speed slightly and run slowly. I slowly added more time running. I was more concerned with running for longer and longer amounts of time than with distance. 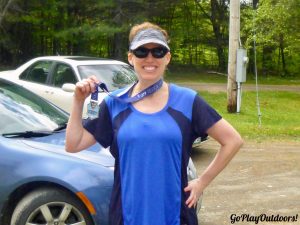 Magoo after Her First 10k

Race day came. It was sunny and in the low thirties. It had snowed the night before, but the roads had melted off. This was my first time running on roads. All my training was on the treadmill. I was nervous about being on the road. I was happy that Squirrel, my younger son, ran the race with me. At 14, he was already a seasoned runner. He had started running track in fifth grade.

During the race, I had the following thoughts: This is hard. I’m not enjoying this. I don’t want to run again. It was a mistake to pursue running. This is so much longer than I thought. I do not like this hill!

As I approached the halfway point, Frosty was on the course cheering for me. He yelled out the time. I was surprised. I was doing better than I thought! 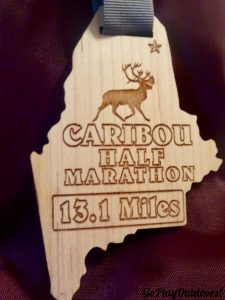 I kept going. I was so glad when I was close to the finish. I did it! I couldn’t believe it. I was proud of myself. My finish time was not competitive or even close to it, but it was much better than I had ever done on the treadmill. I was very surprised. My time was 31:31. My best time on the treadmill was forty minutes. Squirrel finished fourth overall and first in his age group.

I did so much better than I thought I would. It amazed and perplexed me. I got a bit fixated on it. I decided to do another 5K the next weekend. I wanted to see if my time was a fluke, or if I could replicate the results. In that next race, my time was in 30:19! I improved!

Running the race was still hard and not very enjoyable, but oddly, I felt satisfaction when I finished. Strangely, I felt compelled to do more races. I signed up for another race the next weekend and again my time improved.

After my third race, I started running on the roads near my house. I was scared my first time on the roads alone. I had only run on the roads during races. Two of the three roads I began running on don’t have shoulders. At least, they aren’t very busy. The other road has a tiny — foot wide — tarred shoulder, but it is a fairly busy road. The cars travel fast on these roads, over the posted speed of 45. I slowly got more confident running on the roads. 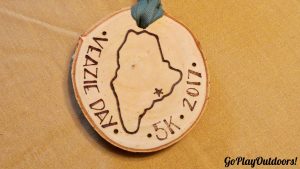 I had a minor setback when a got sick in mid-April. I was down and out for one week. Then, it took three weeks until I felt better. I couldn’t breath well, and I was so tired. Once I was able to start running again, I felt like I had regressed so much. I had to build my endurance back up again.But, I wanted to keep running.

My next race in mid-May was the Caravel 5 Miler. I was still building my strength back up. I was sure I could run that far, but how long would it take me? I was feeling a bit intimidated by the distance of this race. My first three races were 3 miles. This would be nearly twice as long.

I finished the Caravel race and was thrilled that I did it in under 2 hours. My time was 50:56. This gave me the confidence to sign up for the Black Bear Race 10k distance (6.2 miles) at the University of Maine in the beginning of June.

During the Black Bear, Frosty was cheering me on along the course. At about the four mile point, he told me my time. Wow! I was doing better than I thought I could. I kept pushing with renewed commitment.  I was thrilled to finish my first 10K in 58:32. 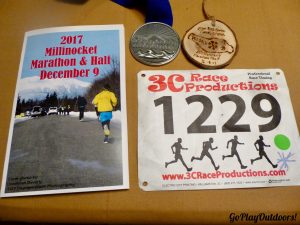 The Millinoocket Marathon and Half

In mid-July, I got a Garmin running watch. It was so cool! Now I could know my distance and mile times. It was very inspiring. I loved seeing the GPS routes and elevation profiles of my runs.

At the end of August, I ran my first half marathon, The Blueberry Cove Half Marathon. I was nervous and excited for my first half. I was so thrilled that I did it! Not only that, I did it much faster than I thought I would.

I felt so proud of myself to be a half marathoner! From August through December, I ran 5 half marathons, one a month. Each new goal I set this year brought new worries, new challenges, and new feelings of accomplishment and confidence when the goals were met. 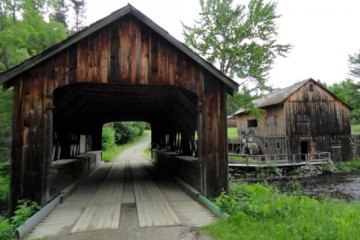