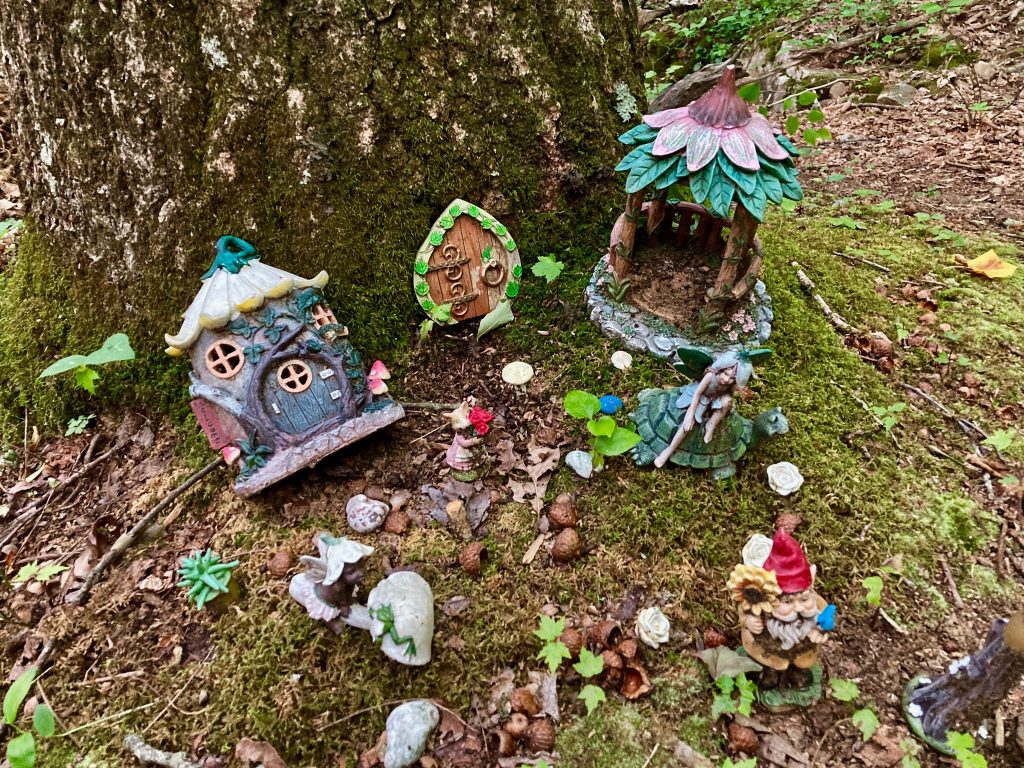 We packed up and continued up Chestnut Knob. Frosty and I are slow going up hill. Sharkey  likes to power up fast, so he took off. 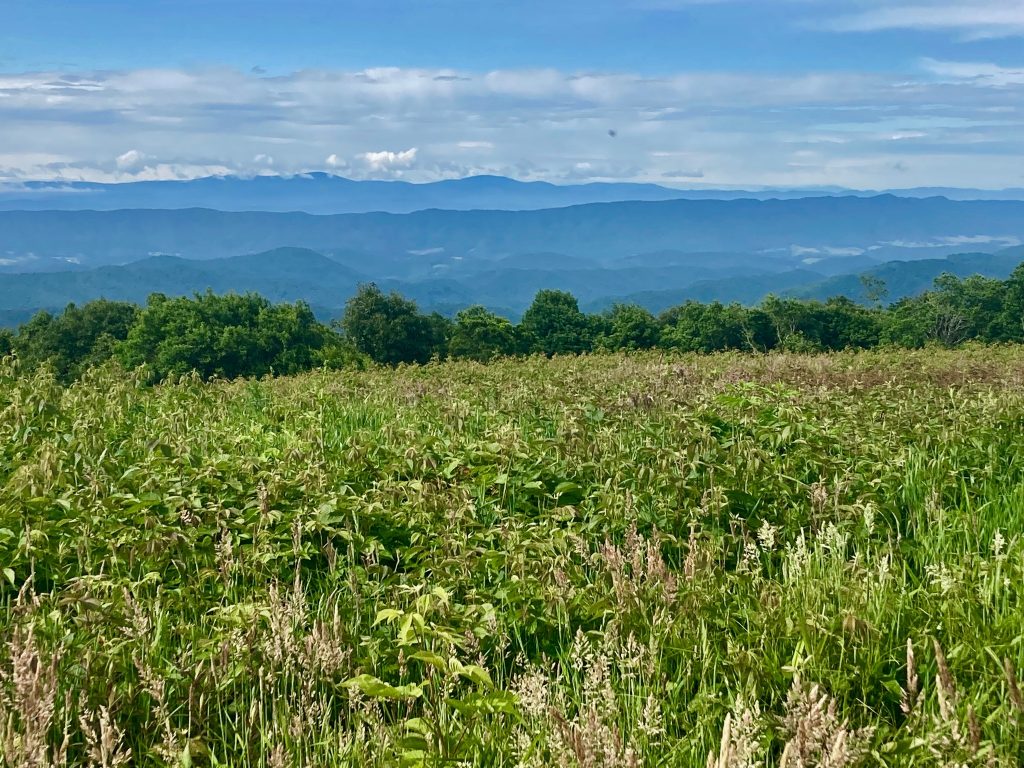 View from the Ridge of Chestnut Knob

We met up with Sharkey at the Chestnut Knob Shelter. This is an enclosed stone cabin with bunks inside. It was a fire warden’s cabin at one point before being converted into a shelter. We stopped and had a snack here. I heard that this shelter has a snake problem. 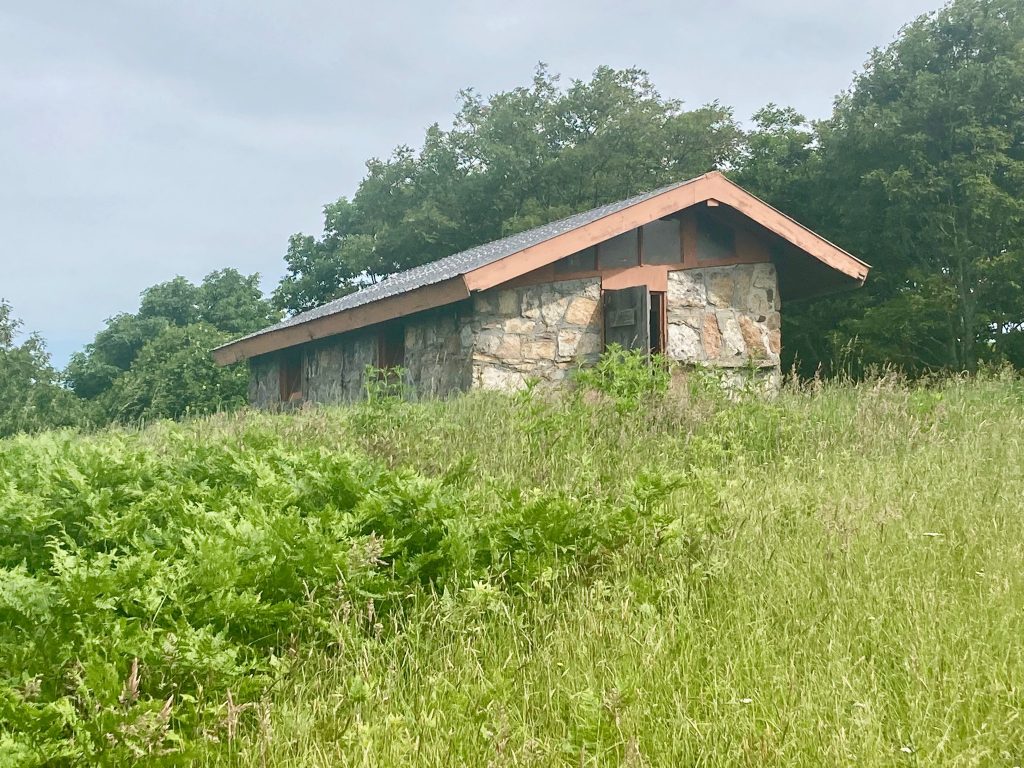 When I got to the shelter, Cheddar, Chick Pea, and Low Fuel were here. I also met a thru hiker named, Grace. She didn’t have a trail name yet. 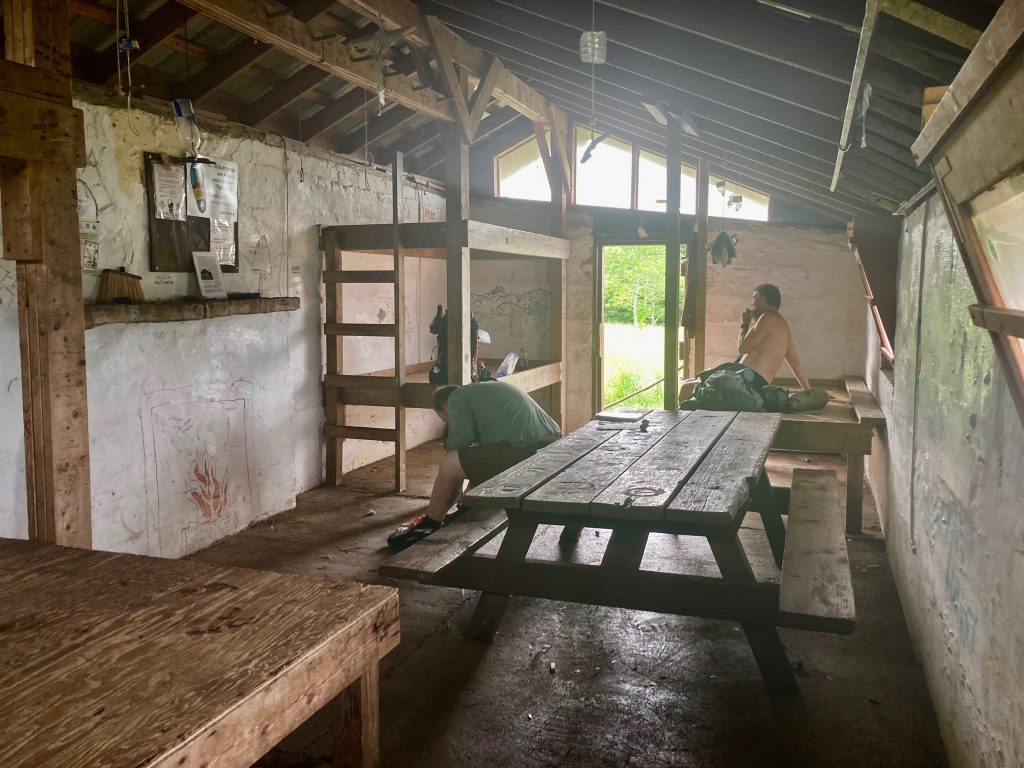 Inside The Chestnut Knob Shelter

Outside the shelter, there was a view of Burke’s Garden, a town in the valley. This area looks like a crater. It’s a giant limestone sinkhole. The trail travelled along the rim of the sinkhole in places. 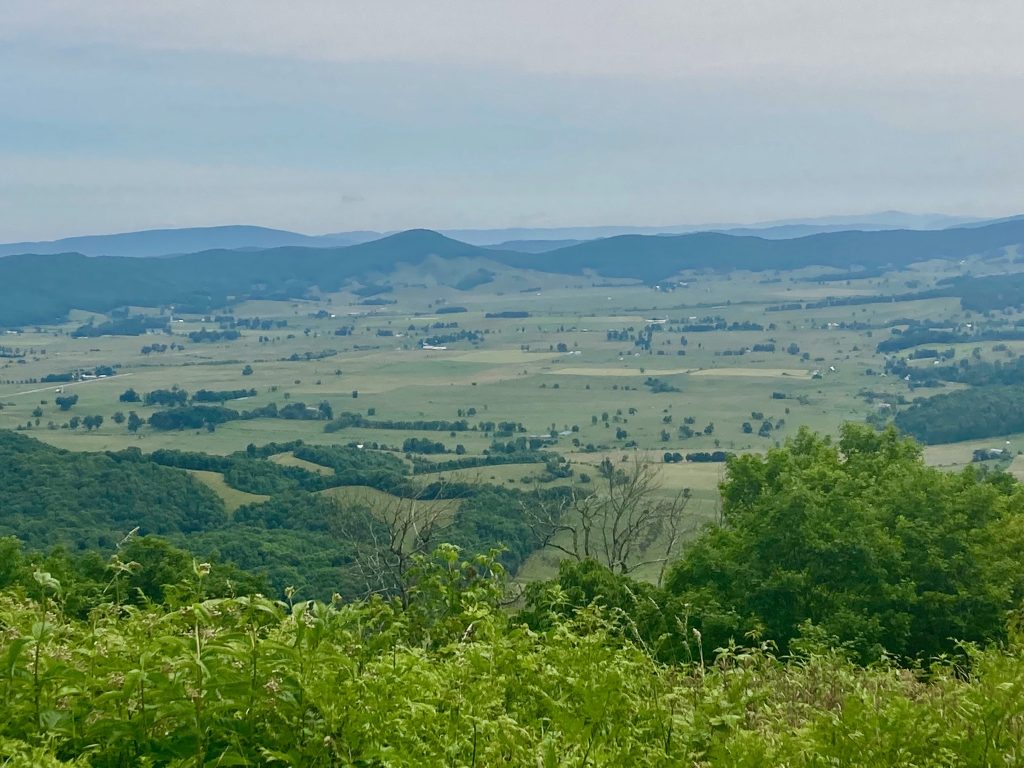 I hit my half way mileage mark on the trail today while up on the rim! Wow! I was amazed… half way there! Frosty took a bunch of photos, and of course, the Bon Jovi song Livin’ on a Prayer entered my head on repeat. “Woah, we’re half way there. Woah, livin’ on a prayer. Take my hand, we’ll make it I swear. Woah, livin’ on a prayer.” Although, I must admit this is my go to half way through any thing song including almost every hiking day. But it had EXTRA significance today. 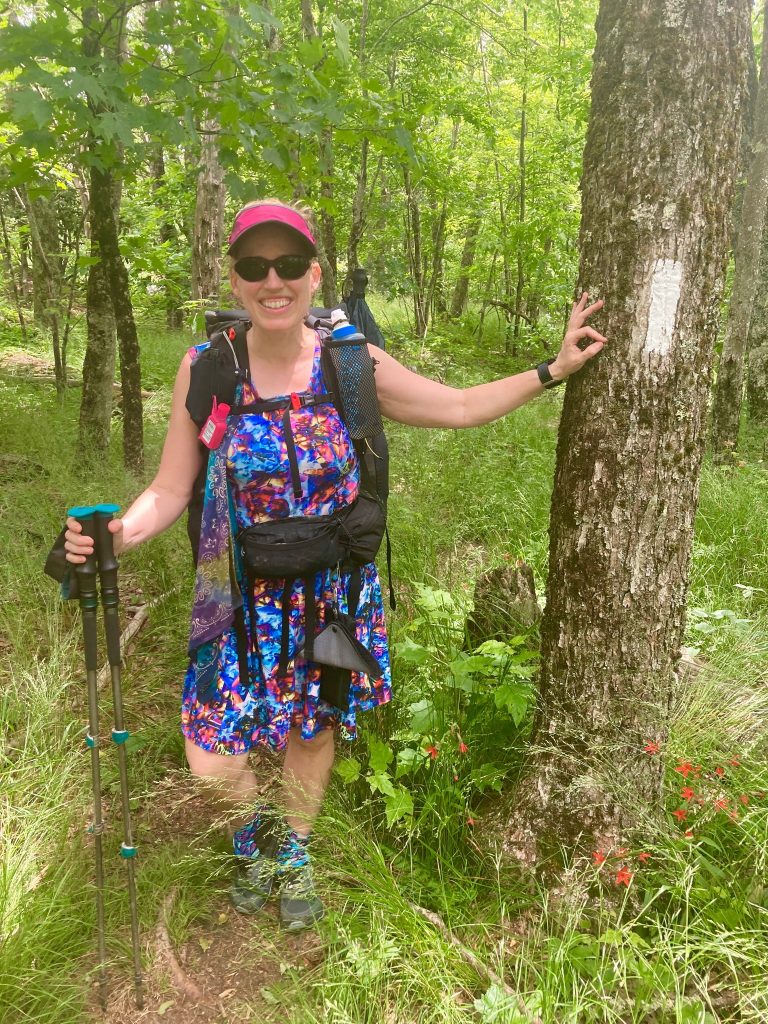 Sharkey found a feather while hiking at stuck it in his buff. Maybe we should’ve changed his trail name to Macaroni. 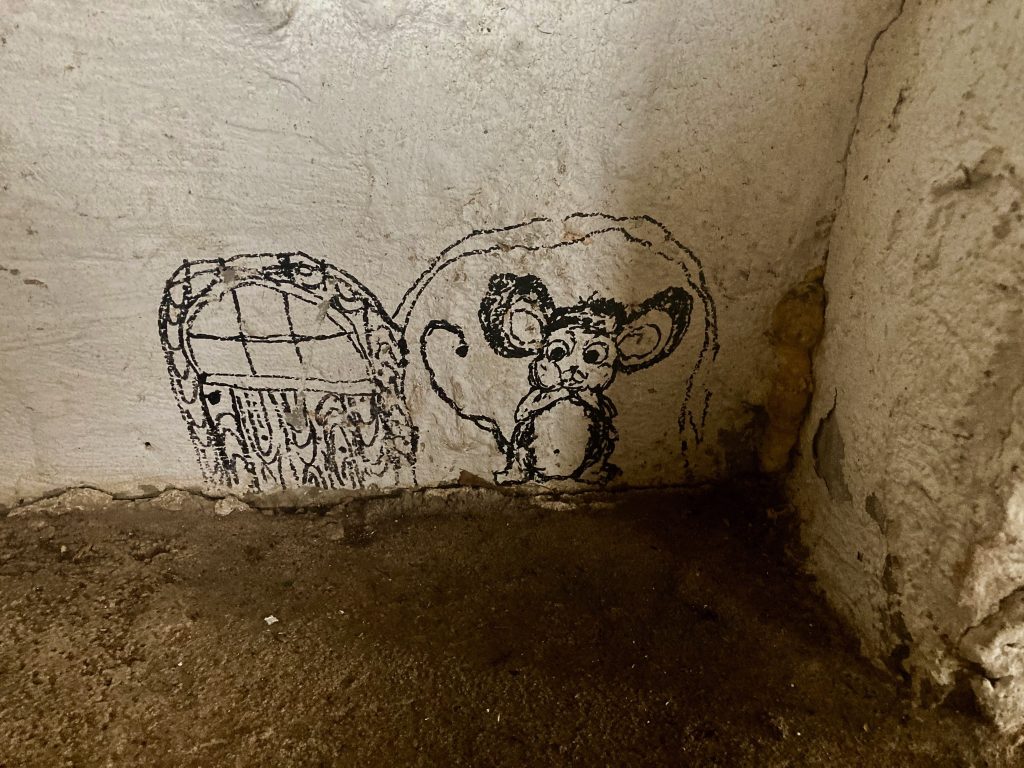 The Graffiti Inside The Chestnut Knob Shelter

Frosty had packed all our resupply boxes before he left. The kids just had to mail them out. One of our resupply boxes was sent to Mountain Garden Hostel. The Hostel maintains a water cache at VA Route 623. The water bottles had the hostel phone number on them, so that hikers could call for a pick up. Frosty had called earlier in the morning and left a message, but didn’t hear back. 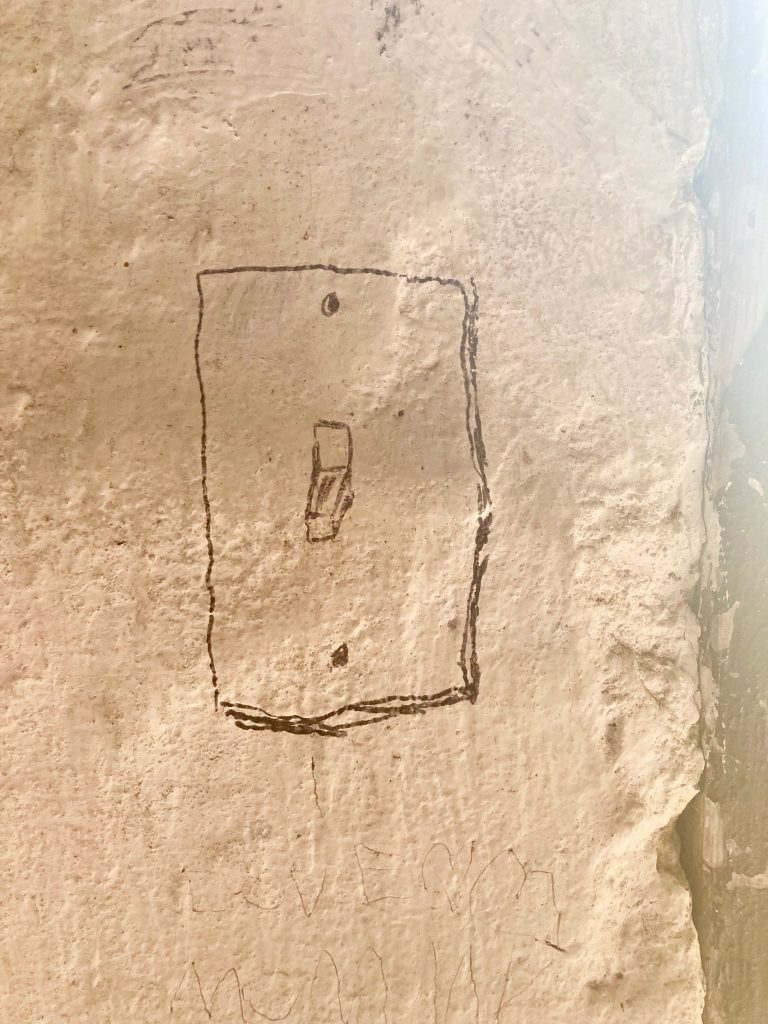 At the water cache, we met thru hiker 7-11, he was hanging out taking a break. He hiked with a chair. We actually met a few people thru hikers carrying chairs this year. 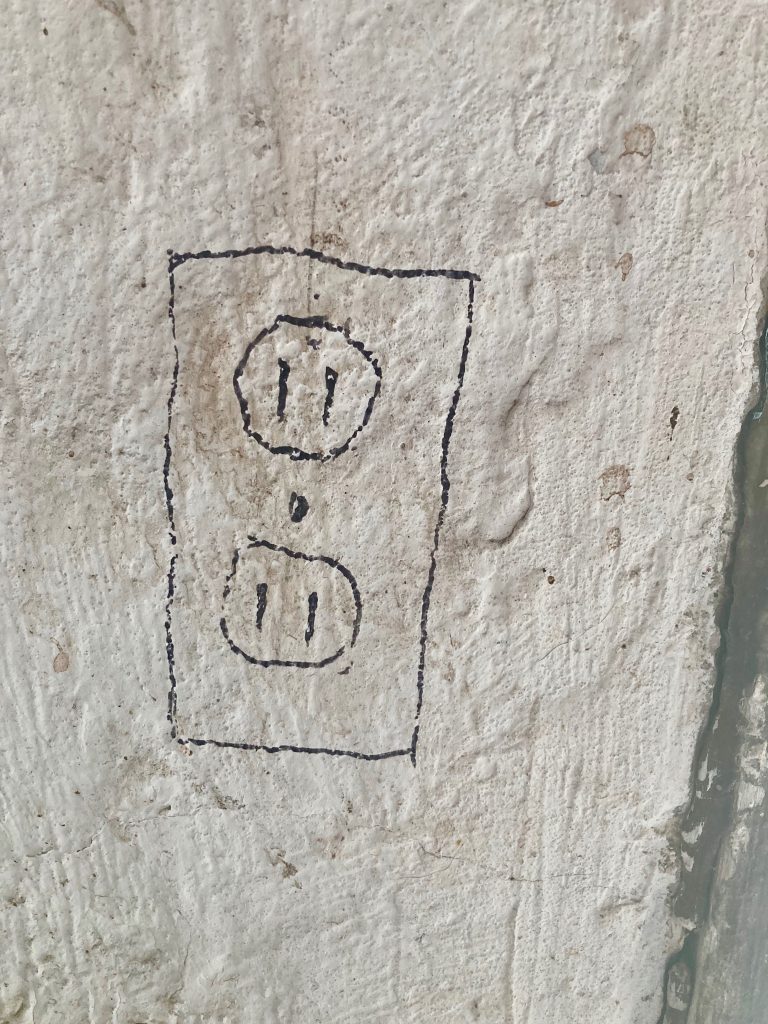 Frosty called the hostel again and got through. Bitcoin, a work to stay thru hiker, came and picked us up. Bitcoin was a California lawyer and programer who planned this thru hike as a present to himself for his upcoming 60th birthday. He paid for his hike with bitcoin profits, thus his trail name. He had worked with some big name companies in the entertainment industry like Industrial Light & Magic. He lived in the Oakland hills. He was staying at Mountain Garden Hostel waiting for his trail buddies to catch up with him. 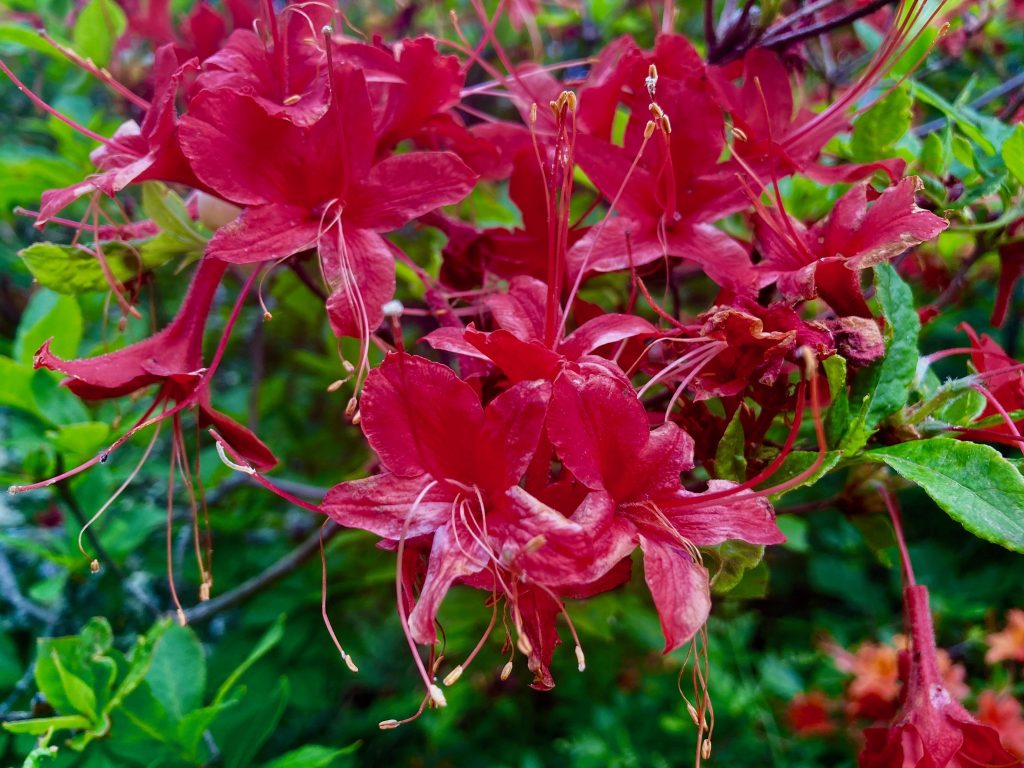 The road into the town Burke’s Garden had views overlooking the town/valley. It was so beautiful. There were serene pasture and old farmhouses while the whole area was framed by a ring of mountains.. Many of the residents here are Amish. The sign posts at the road junctions in the town were a series of wood planks with family names and arrows pointing the way. 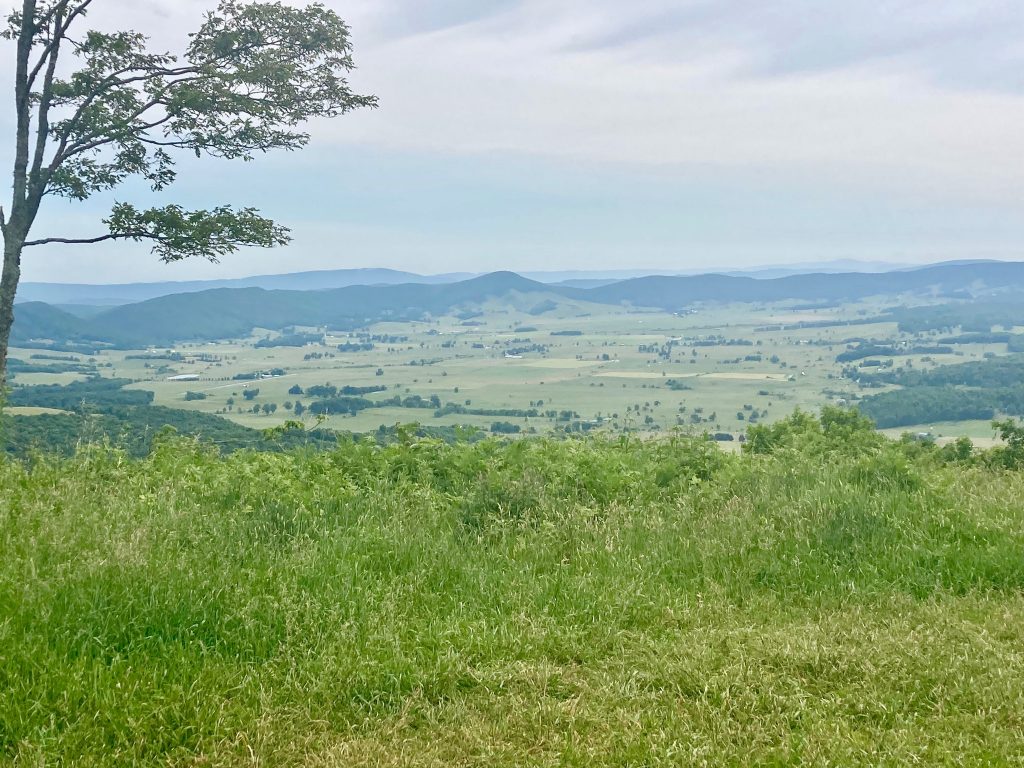 After arriving at Mountain Garden Hostel (MGH), we checked out the newly built, but not finished bunkhouse. Then went into the main house. One of the downstairs rooms had been turned into a bunk room.We chose a private room shared with Sharkey. It was on the second floor. 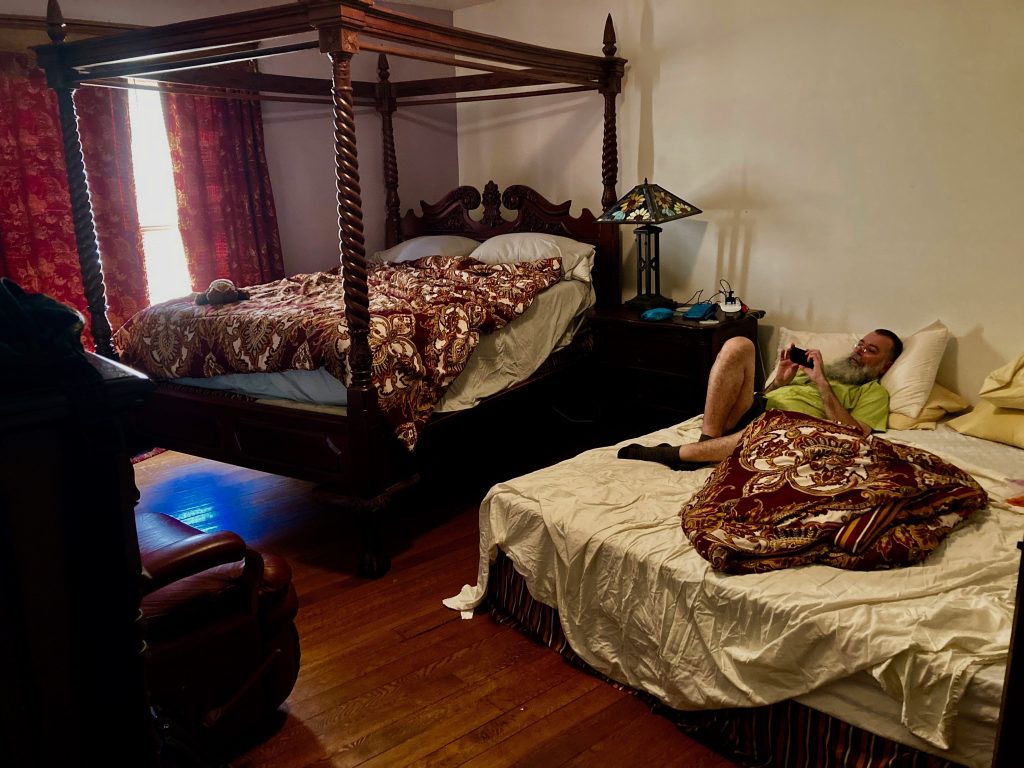 Our Room at Mountain Garden Hostel

Doc, the owner of MGH was about to put the linens on the bed for us, since the caretaker was out on a shuttle and resupply mission. Someone had booked a shuttle to a town that was a fair bit away. I took over for Doc making the beds. He was very old and moved slow. He was British and shuffled around the house in a long velvet, maroon robe. 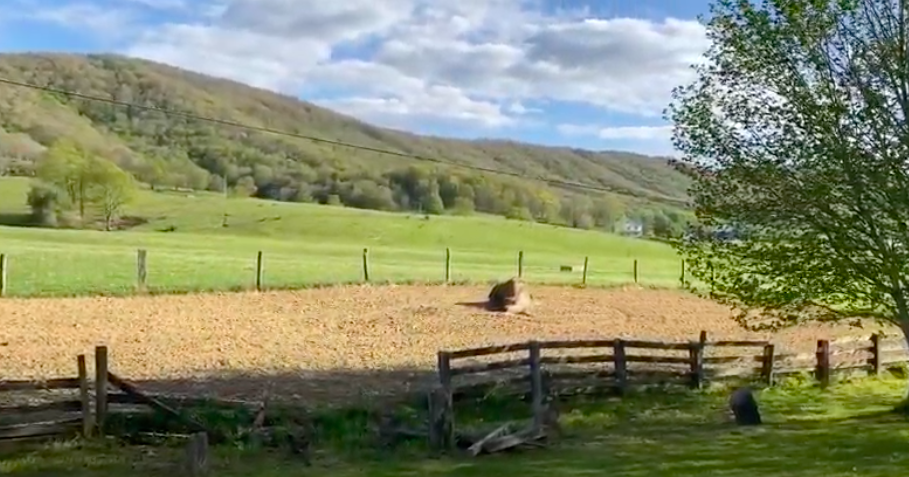 I showered after arrival. Then Frosty did. The downstairs had a bathroom with just a toilet. The washing/machine dryer was in there as well. Doc had a cat that had recently had kittens. The cats were staying in the downstairs bathroom. Everyone was asked to keep this door shut to keep the cats inside. MGH also has a resident husky dog. I did a load of laundry. I threw Sharkey’s stuff in with our laundry. 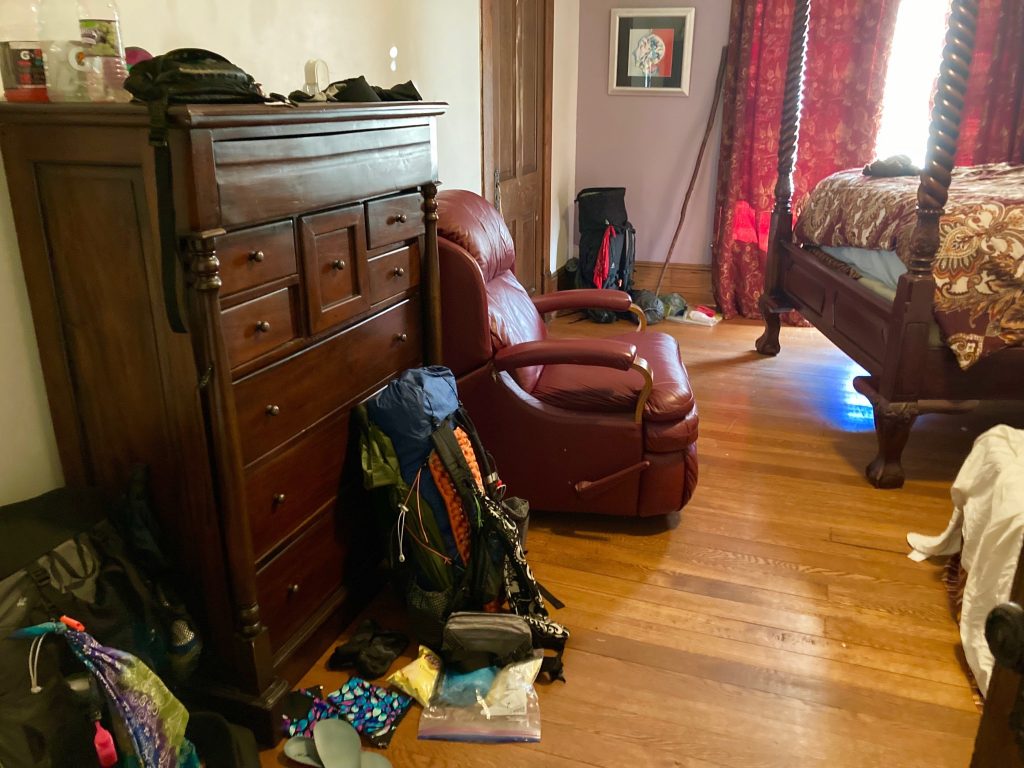 Cheddar, Chick Pea, and Low Fuel showed up awhile later. They decided to share a private room with a futon and a king size bed. They weren’t sure how the futon worked, so I helped them open it for sleeping. Another hiker named Grizz showed up in the evening. 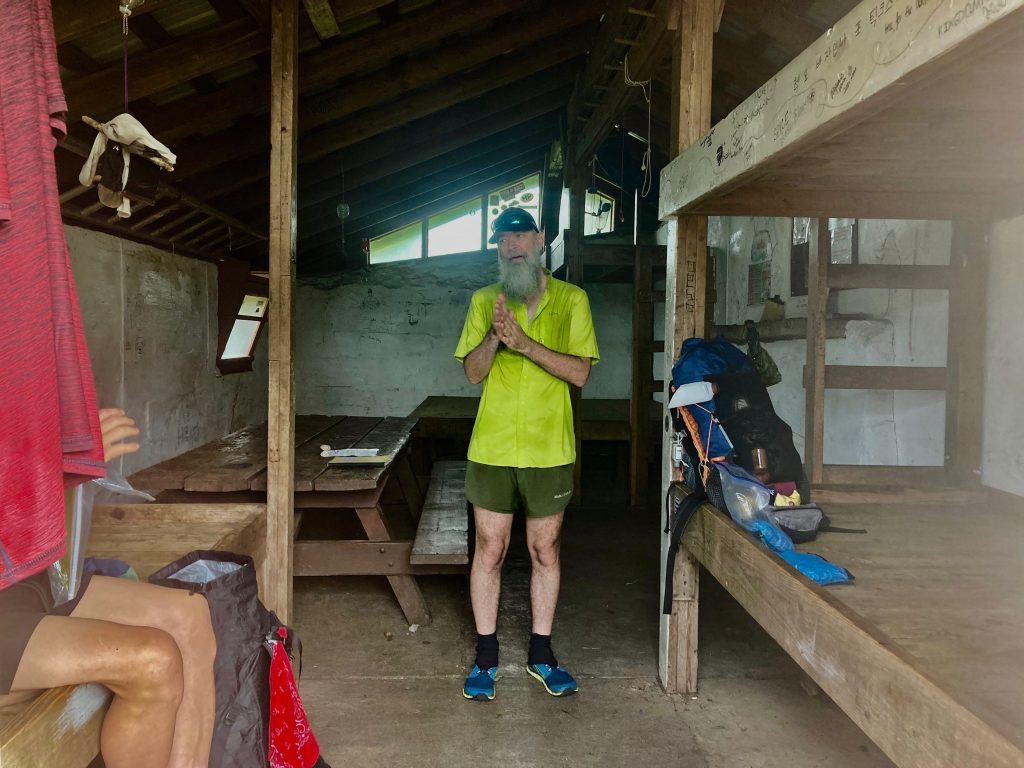 Frosty Inside the Chestnut Knob Shelter

Then Lemonade arrived. He immediately started working on lunch. He grilled up some delicious cheeseburgers! I ate two. He fried up onions and mushrooms to top the burgers. Yum! Bitcoin made some french fries. They were okay. I was all about the burgers, though. We all ate out on the porch. My chair actually broke and I fell to the floor. Luckily, I didn’t fall backwards off the deck. 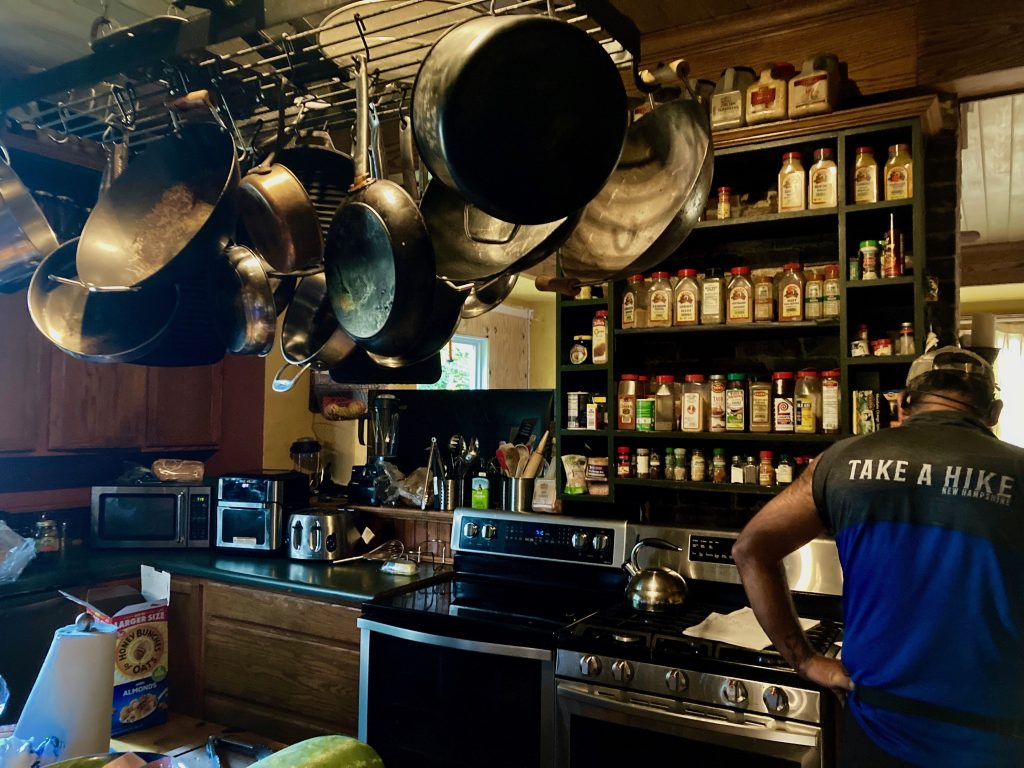 Lemonade in the Kitchen of Mountain Garden Hostel

Since we had a late lunch, we just had snacks for supper. We also went through our resupply box and reorganized our packs. The box with my old glasses that Squirrel had sent out had arrived too. 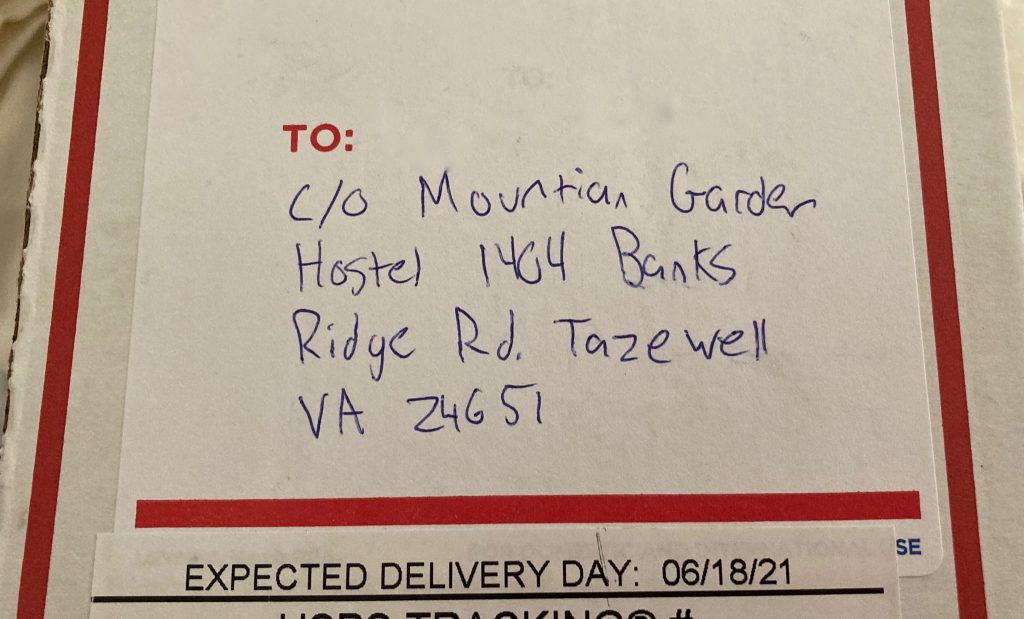 The Postal Workers Were Able to Decode Squirrel’s Label

There was a den downstairs with a tv, DVD player, and many movies. Bitcoin and Sharkey hung out and watched a movie together and talked for quite while. I enjoyed sleeping on a real mattress. 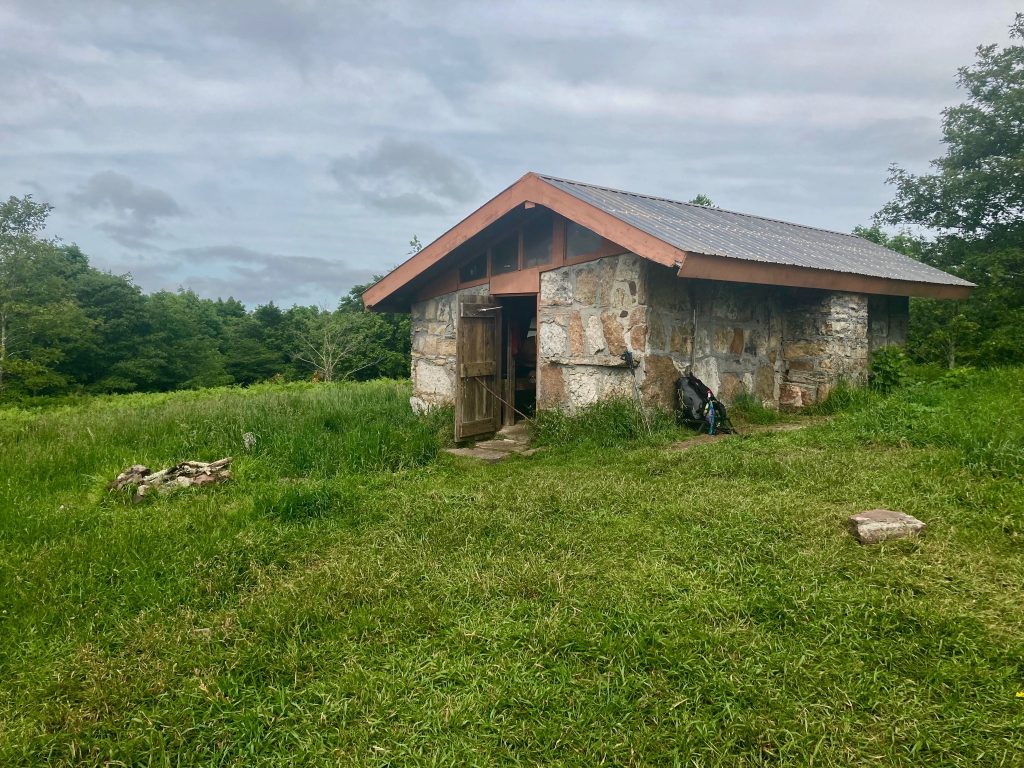 Chestnut Knob Shelter with My Pack Against It

We visited MGH on June 20th. I was shocked to find out later in the summer that Doc had passed away on June 29th. 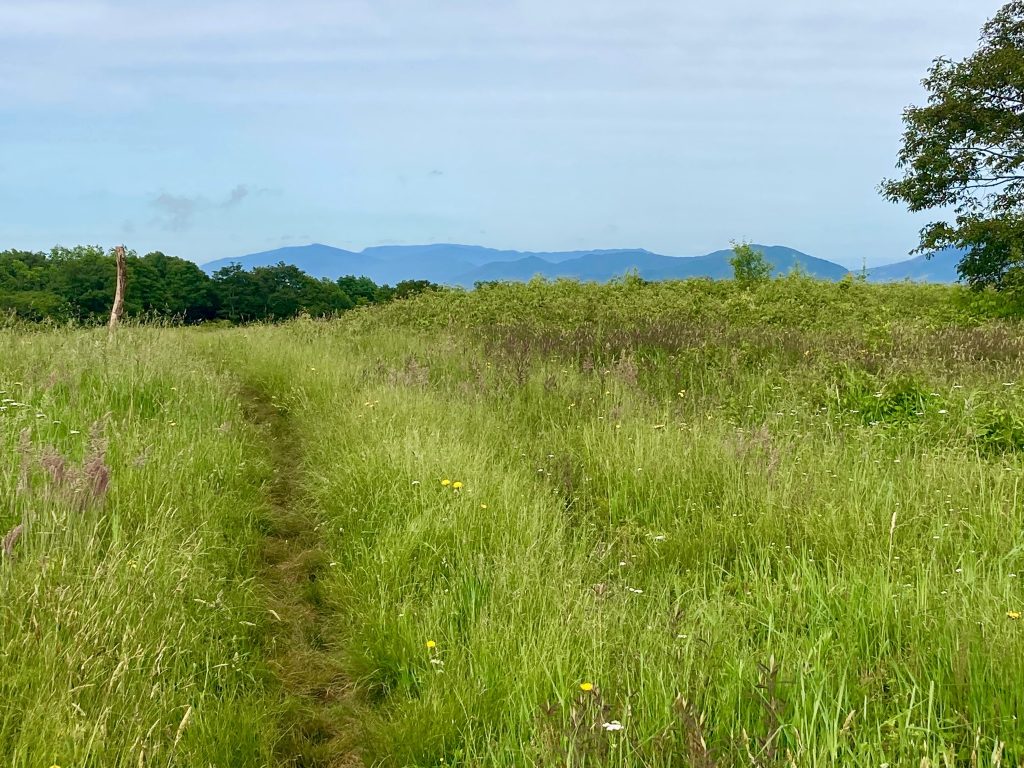 Traveling on the Ridge of Chestnut Knob Heading Toward the Shelter 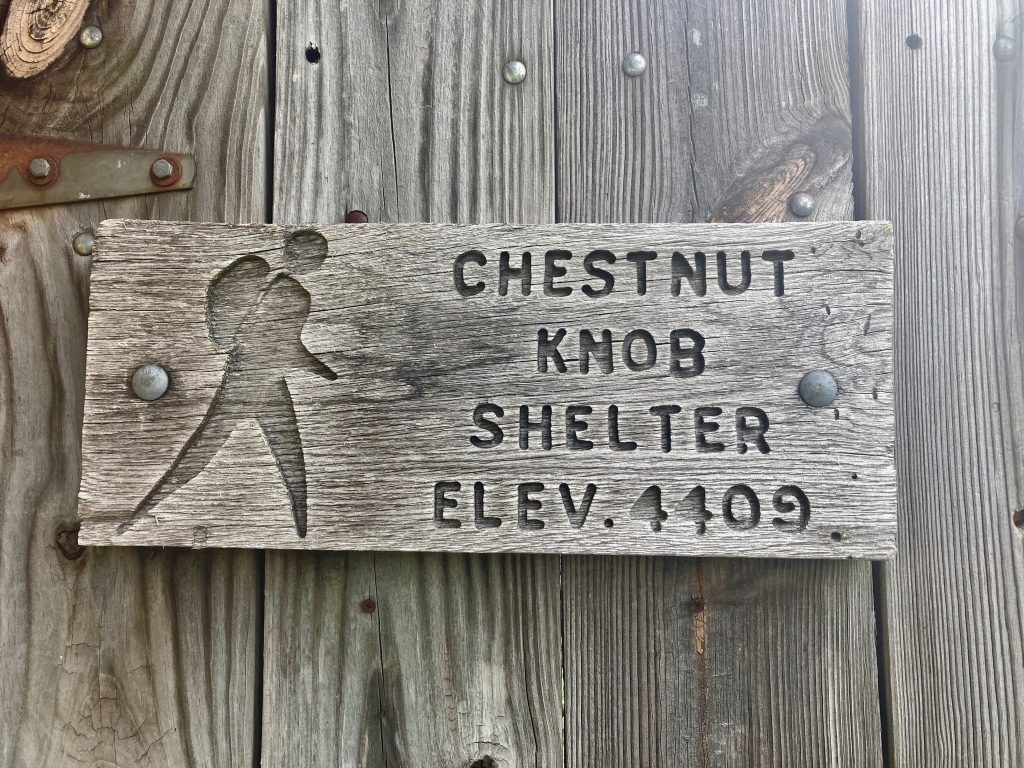 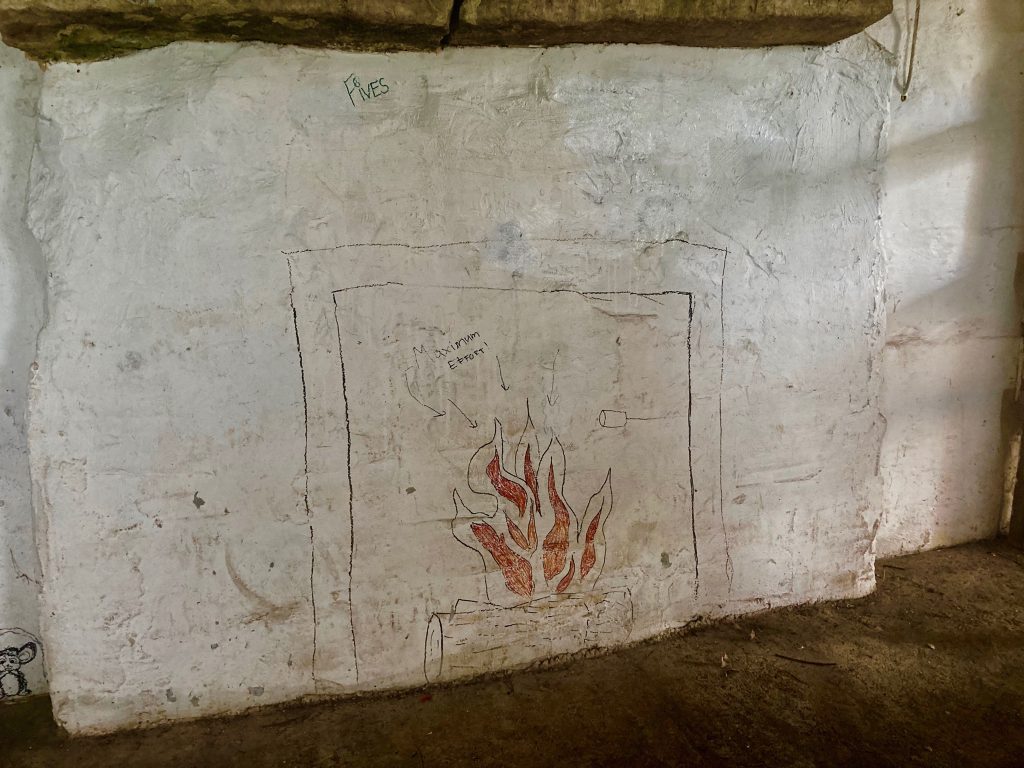 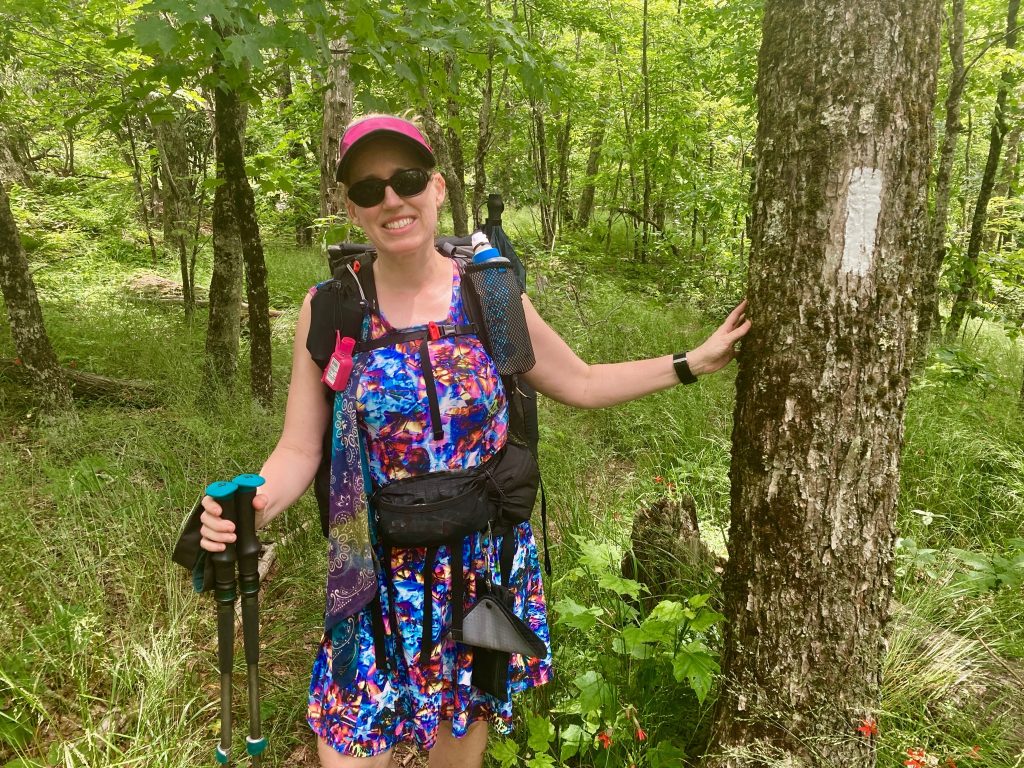