We packed up and headed out. Longevity was already gone. We saw a deer next to the trail.

We have passed many remnants of stiles while hiking in Virginia. Today though, we traversed four that were still in use. 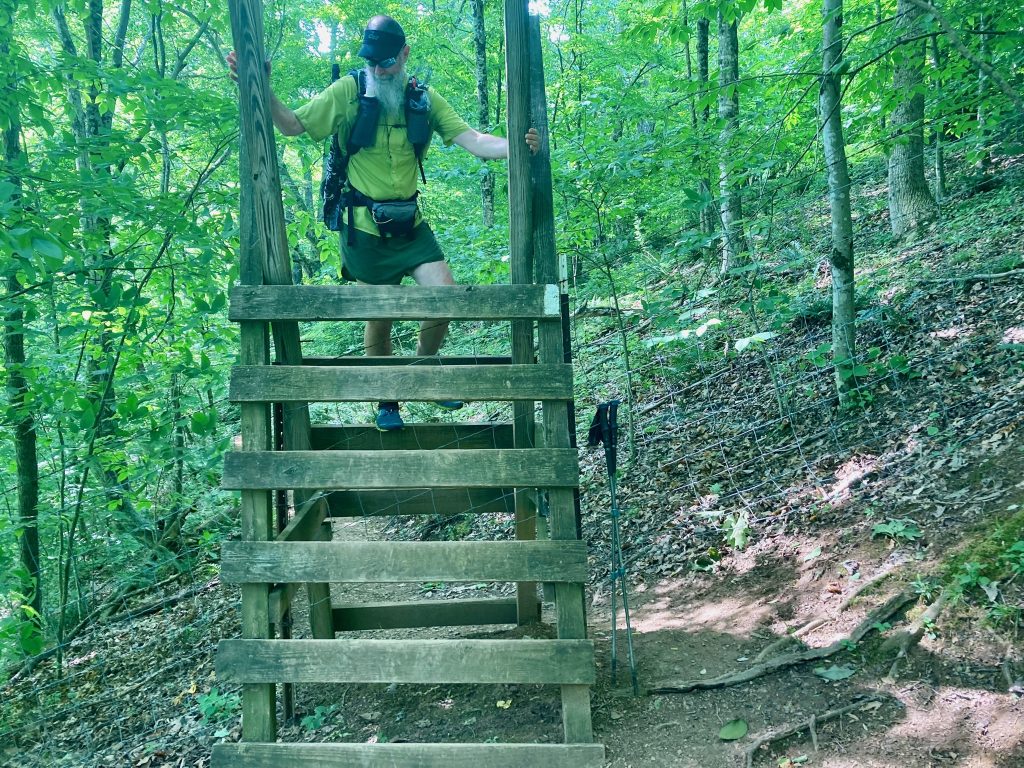 We stopped at Knot Maul Branch Shelter for a snack and drink. We met a thru hiking couple, Cheddar (husband) and Chick Pea (wife). They had met and become a tramily (trail family) with Low Fuel. He was out for a short section. I think he had just graduated from college. Low Fuel was eating pizza that he had packed out from some stop. While at Knot Maul, Cheeks and Trouble came by.I had found Longevity’s hat early in the morning on trail. Since they hike faster than me, I gave them the hat to bring to Longevity.

We met up with Dad Jokes and Sriracha. Dad jokes has been hiking with her the last few times we ran into them. Today we met up with them three times. At Lick Creek, the bridge had been washed away in the Spring of 2020, so it was a wet foot crossing. I should’ve taken the time to take off my shoes. The water was just over ankle deep at the crossing. When we got here Dad Jokes and Sriracha were hanging out sitting in the water. Sharkey and Frosty joined them for a short time. I didn’t want to be in wet clothes. I had sloshy shoes for awhile. 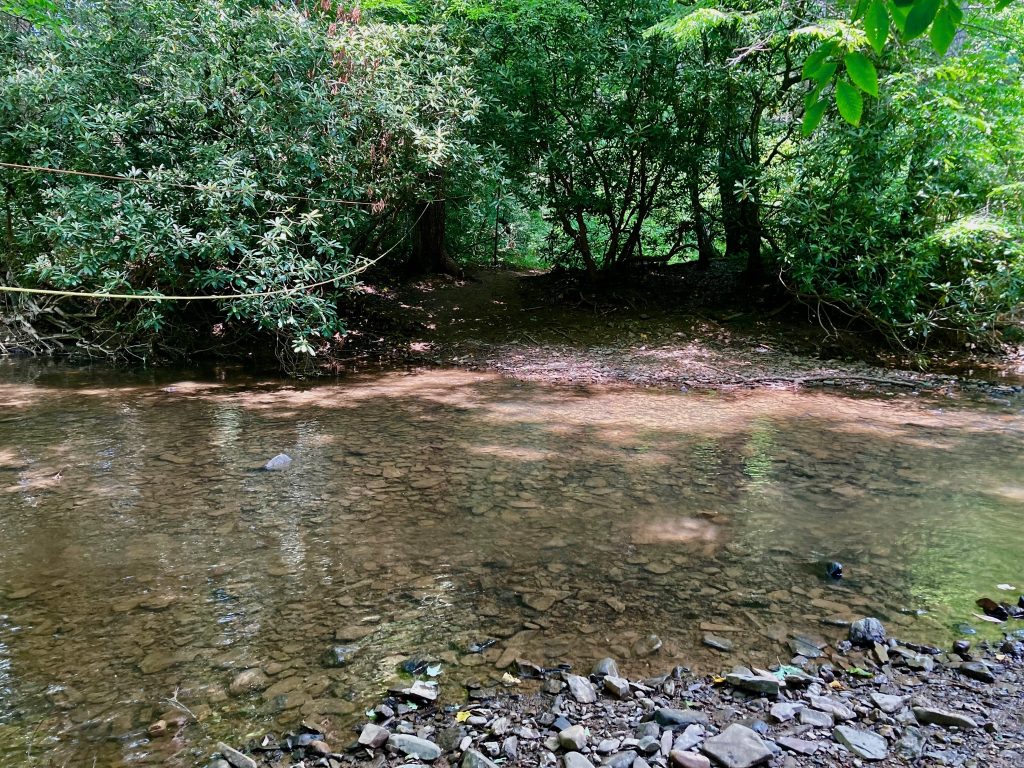 We stopped at a stream to get more water and have some snacks. We have Katadyn BeFree water filtration system that you squeeze. Sharkey has a BeFree gravity filtration system.  When we were finishing up, Cheddar, Chick Pea, and Low Fuel met up with us.

We later ran into Trouble on the trail. Precious had run off. She was very upset. Cheeks was out looking for her. Precious had run down into this heavily vegetated ravine. There wasn’t much that we could do to find Precious. We tried to comfort Trouble as much as we could. The four of us, Sharkey, Frosty, Dad Jokes, Sriracha, and I, eventually hiked on. We kept an eye out for Precious and called out her name periodically. Before we left Trouble, she gave Longevity’s hat back to me. We ran into Cheeks coming back down the trail still searching. Precious did eventually get found. 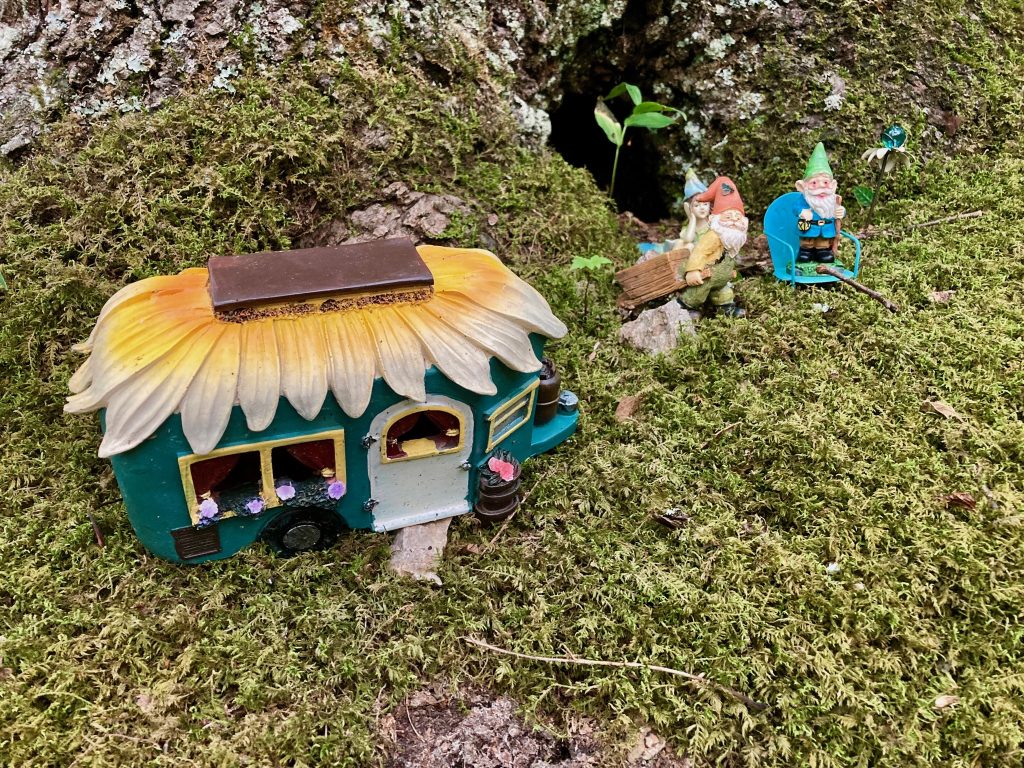 Came Upon This Little Scene in the Middle of Nowhere

I eventually gave the hat to Dad Jokes and Sriracha to get to Longevity as they were about to speed away from us.

We loaded up with water before starting up Chestnut Knob. We were headed to a stealth site part way up the mountain. Sharkey realized that he left the strap for his water filter system behind at our previous water stop.

This was a nice stealth site. Frosty cooked up our supper, Asian Noodles. It was too spicy for me, so I ended up having bars for supper. Sharkey had a shoelace that was wearing out. Then he found one in a tree nearby, but the ends were too frayed to fit in the eyelets of his shoes. 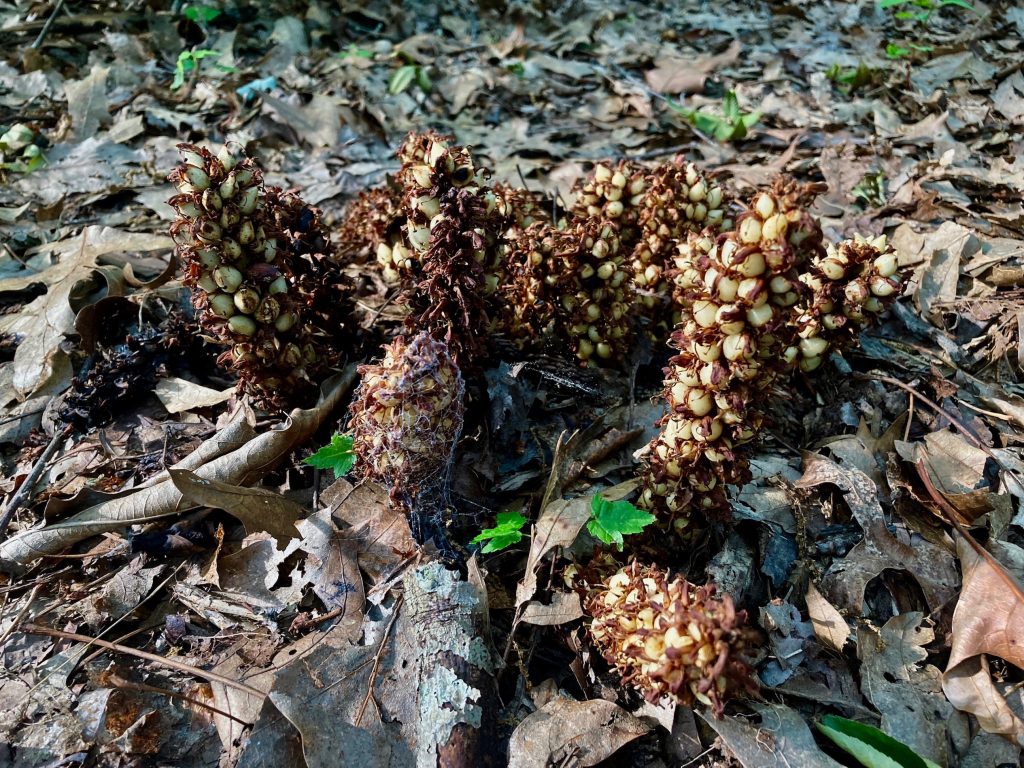 Cheddar, Chick Pea, and Low Fuel came by. They found Sharkey’s BeFree strap and brought it back to him! They had seen a bear one mile from our tent site. I still hadn’t seen a bear on trail.

My shoes were still wet at bed time. My heel felt like it might develop a crack, so I taped it up. We hiked 13.4 trail miles today.