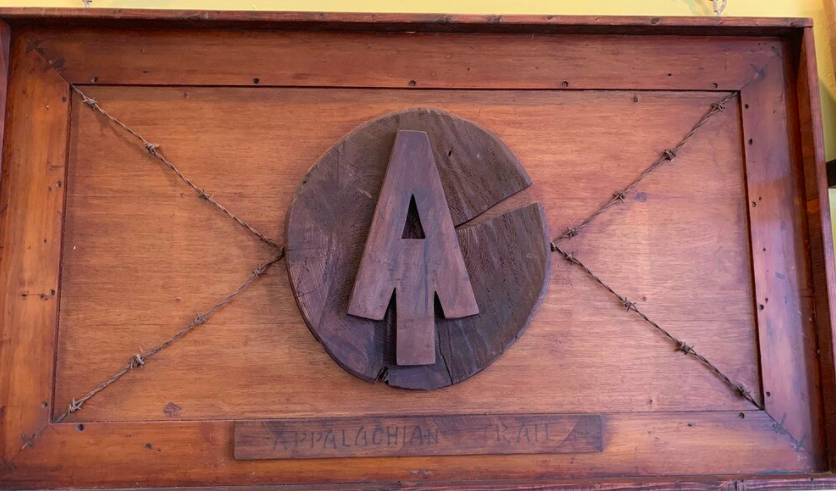 We went for breakfast at the Damascus Diner.  We had eaten supper here last night and enjoyed it. For breakfast I had two fried eggs, bacon, hash browns, grits, and two biscuits with sausage gravy. I don’t care for sausage gravy, so I didn’t eat that. I only like grits with syrup (gasp!), so that’s how I ate them. It was a filling breakfast to start the trail. 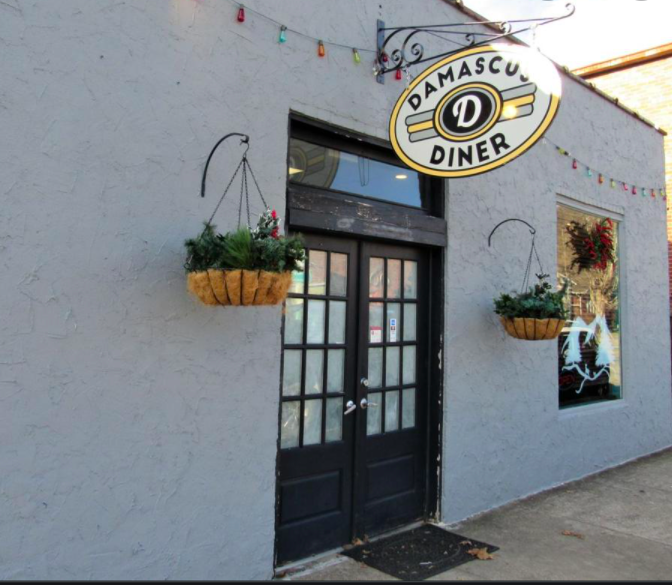 We grabbed our stuff from Dancing Bear Inn and started out hike! The Appalachian Trail (AT) goes right through the town of Damascus.  When we walked by Crazy Larry’s hostel, he came out to talk to us. 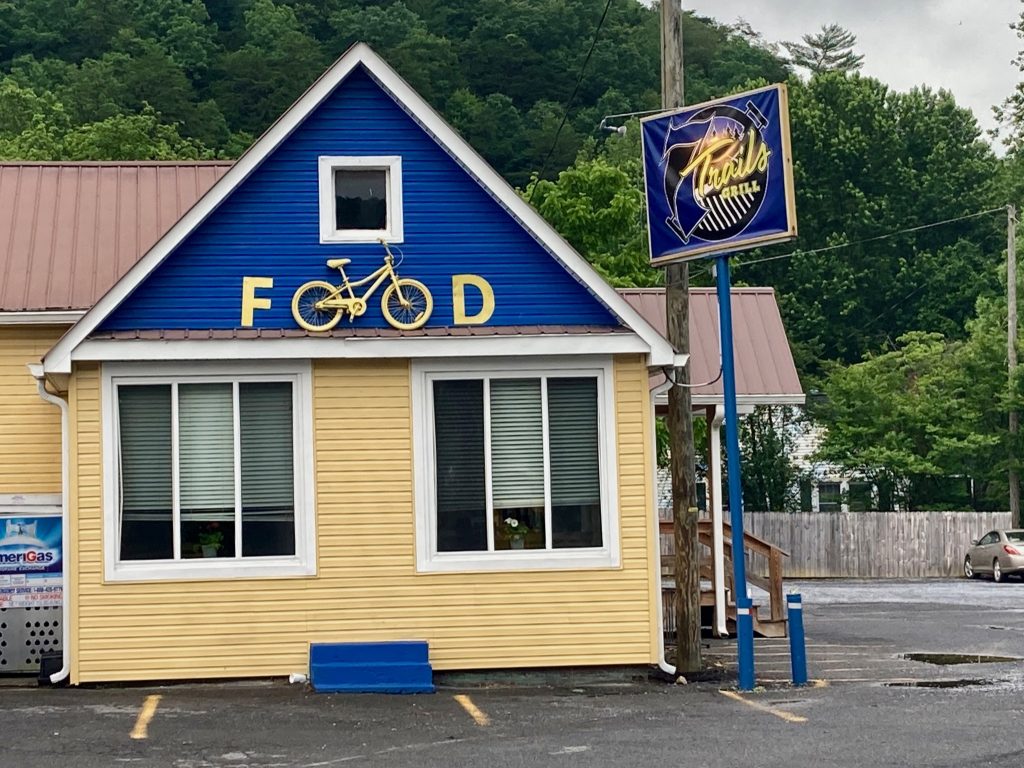 Eatery Along the Road Walk in Damascus

Soon after the trail left the road, it started raining on us. Frosty had given me my first hiking umbrella for Christmas. I brought it on our section hikes of New York and New Jersey, but we only got a couple of very light and short sprinkles. This was my first real test of the umbrella. 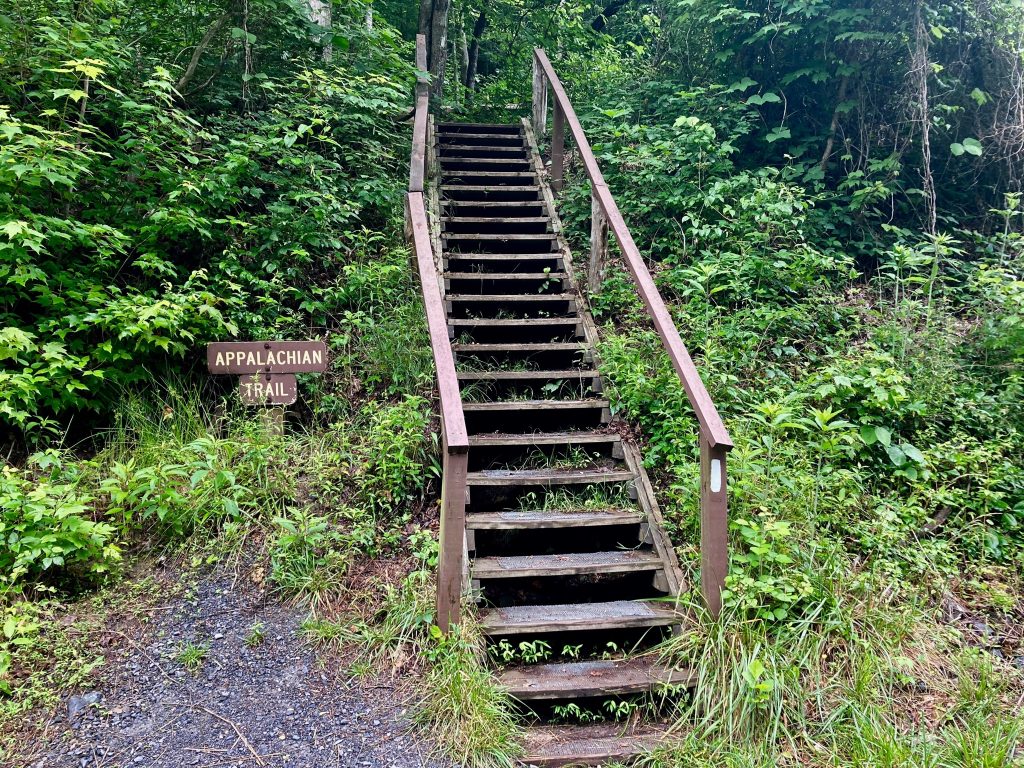 End of the Road Walk in Damascus

There are definitely pros and cons with the umbrella for me. The airflow is nice. You don’t get sweaty like in a raincoat, but you can get a bit wet. Especially the skirt part of my hiking dress still got wet. Which is a little annoying, since that’s a lot of fabric. If the rain was coming with strong wind or sideways an umbrella wouldn’t work. 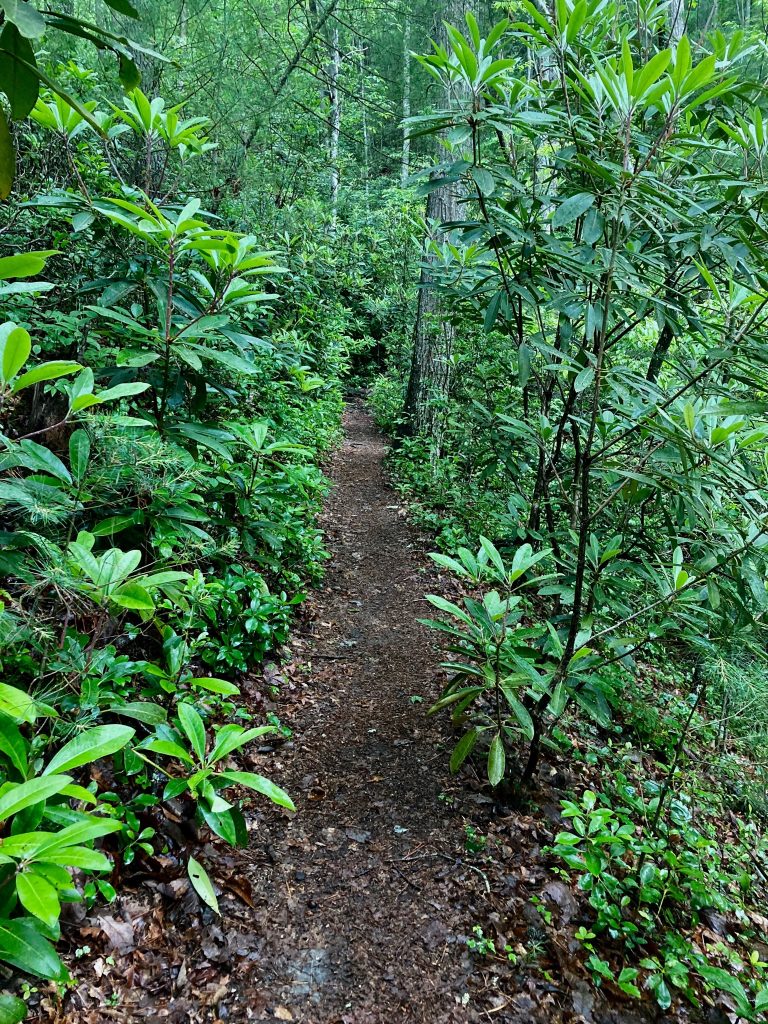 My arm gets tired of being in the umbrella holding position after awhile, even when I switch arms periodically. It works best if I put my poles away. The terrain here was mild, so that wasn’t an issue. 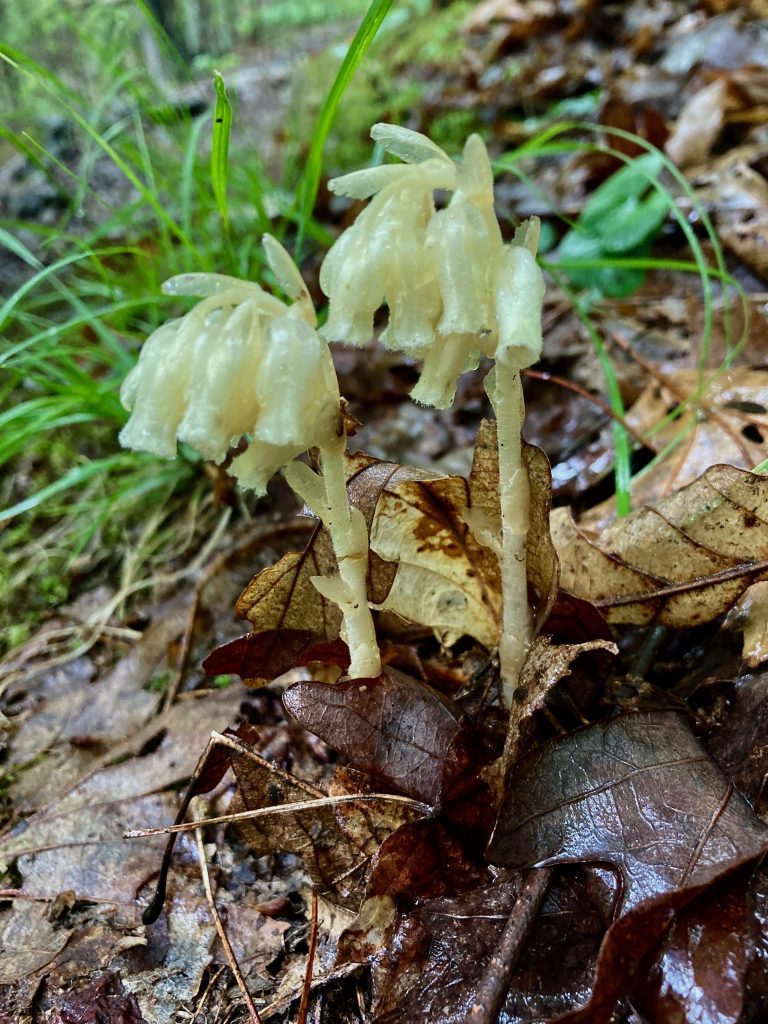 The precipitation alternated from mist to steady pouring rain to drips coming off the trees and randomly repeated this pattern. 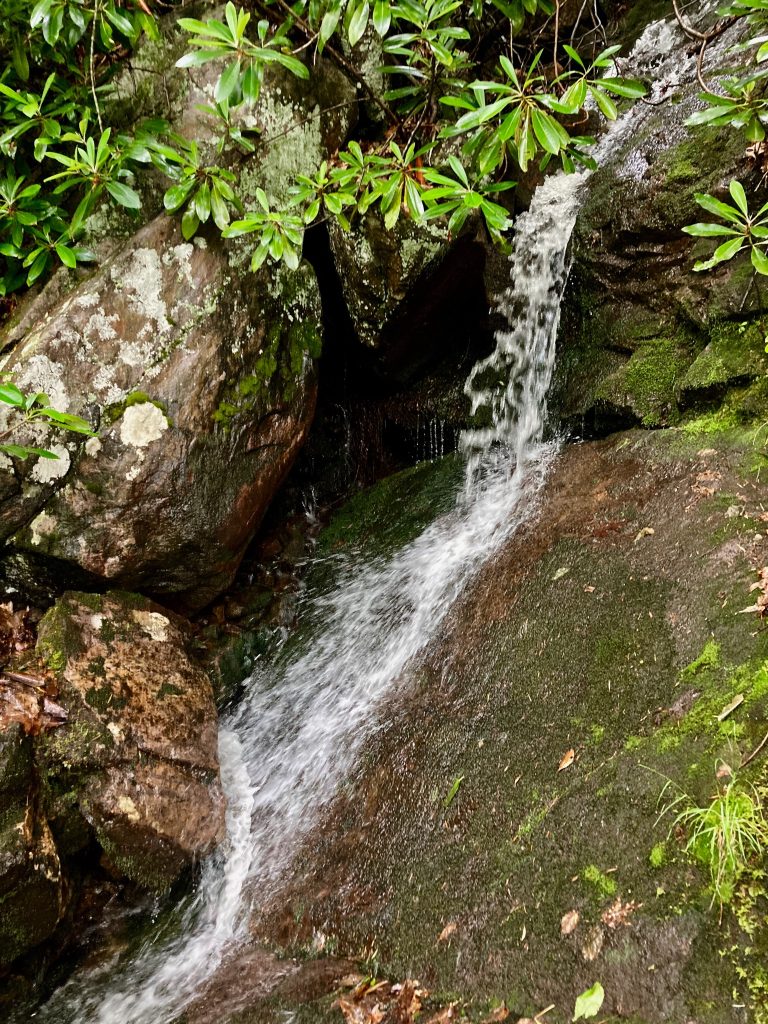 We passed by a large poster randomly tied to a tree in the woods. It was 20 to 30 feet off trail and about three feet by four feet in a large, fake wooden frame. 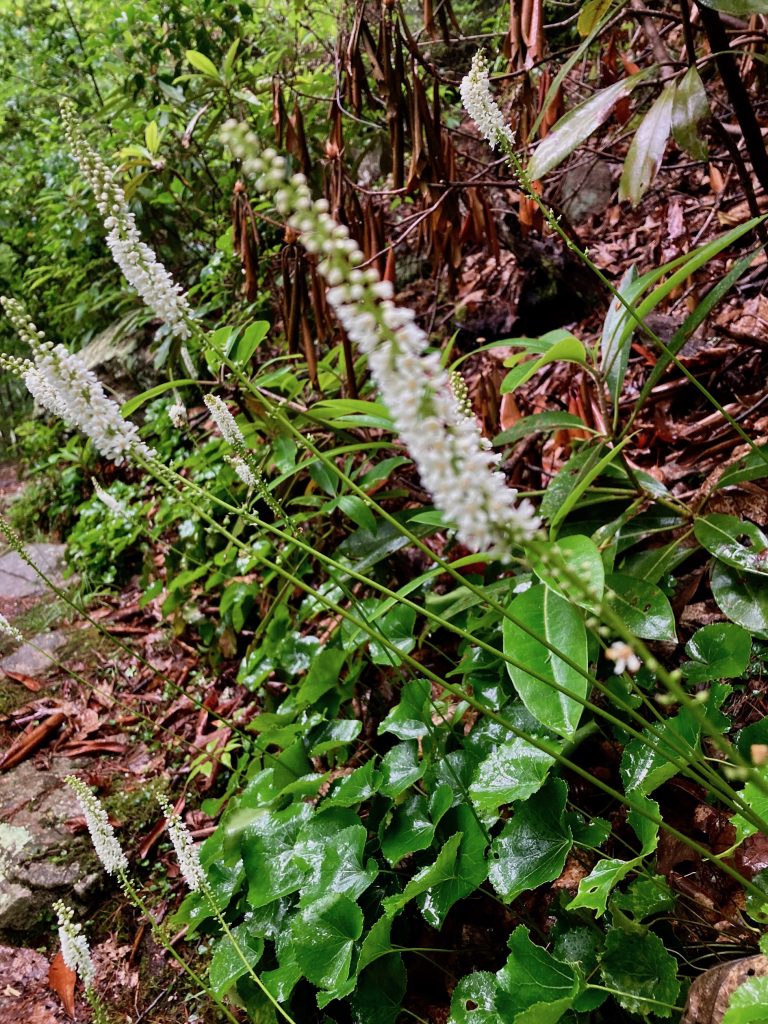 We could see the occasional cyclist as we looked down onto the Virginia Creeper Trail. I think if the weather weren’t rainy that we would have seen a lot more cyclists. 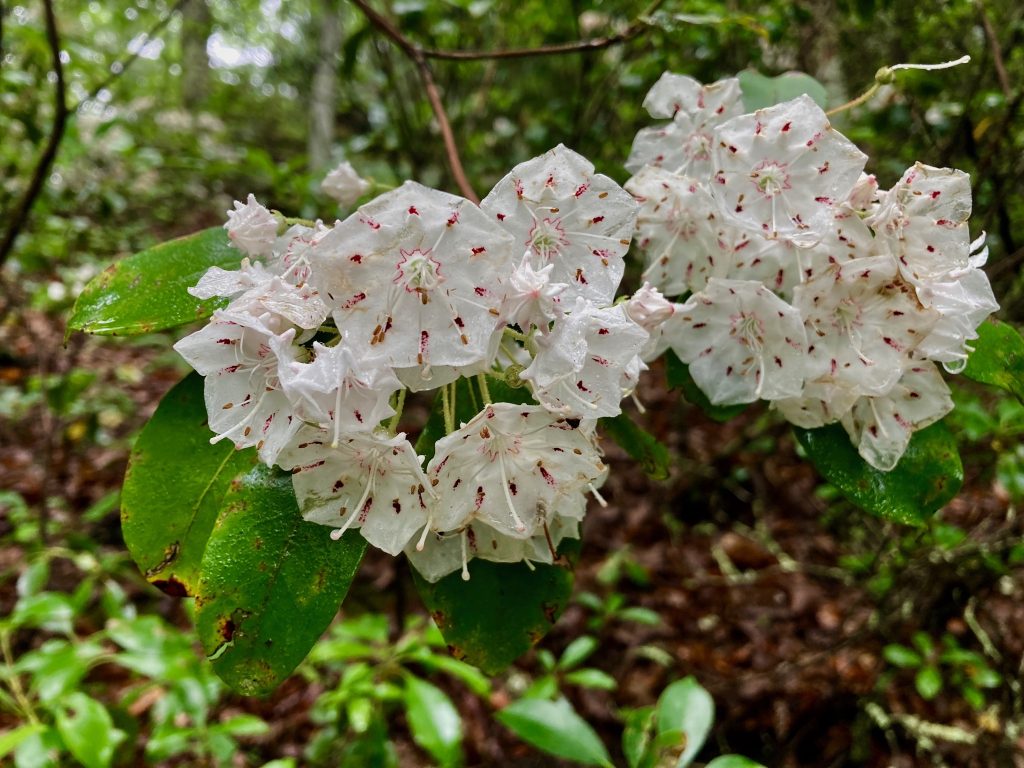 We saw some blooming mountain laurel and lots of toads today. Unfortunately, one toad jumped across my path as my foot was swinging forward, and I accidentally kicked it. I felt so bad. It toppled a few feet down the steep bank. I’m hoping it was just stunned. It was lying motionless on the bank. 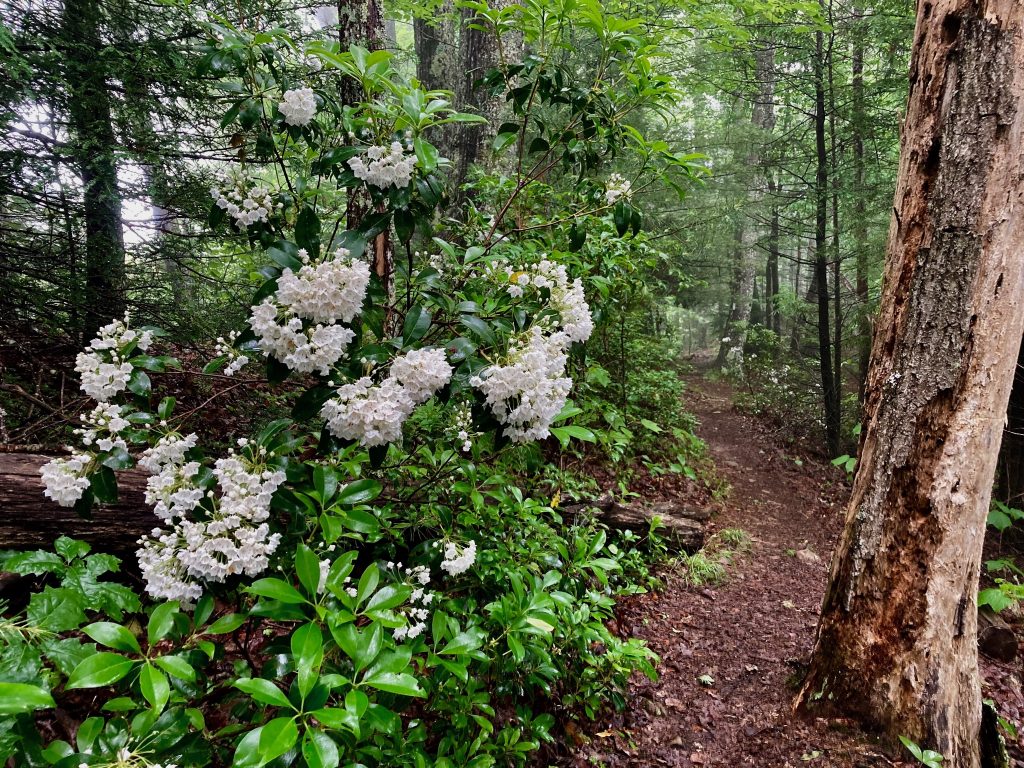 Later a box turtle that was crossing the trail climbed up on a wet log parallel to the trail and slipped. It fell about four feet down the hill. 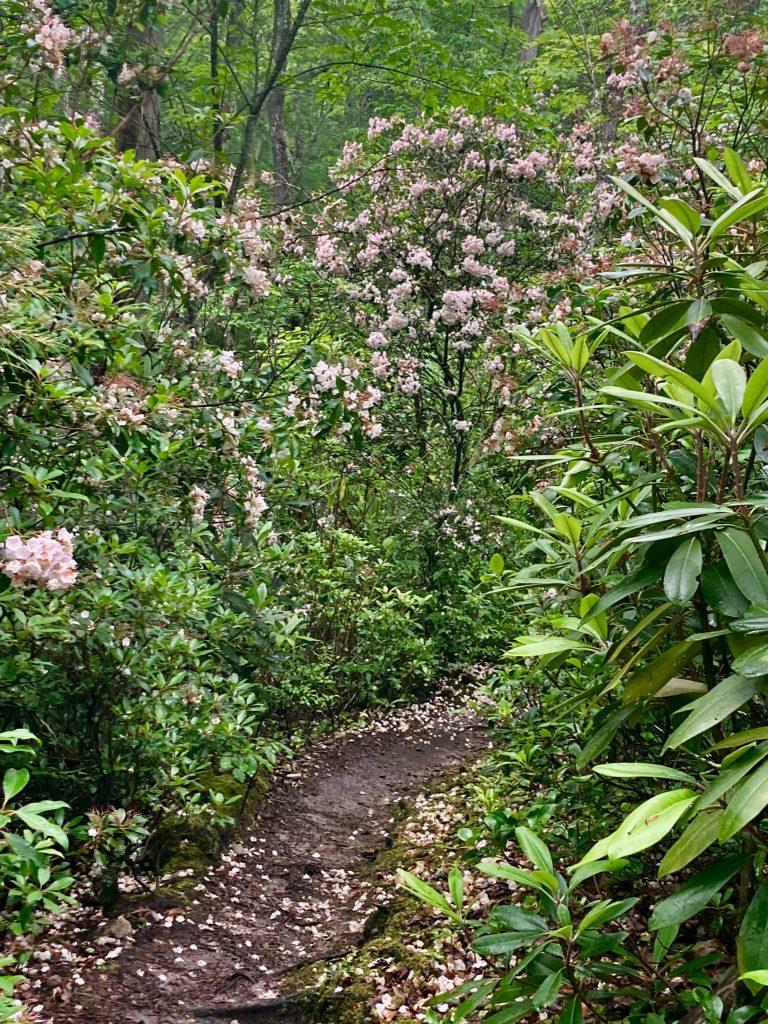 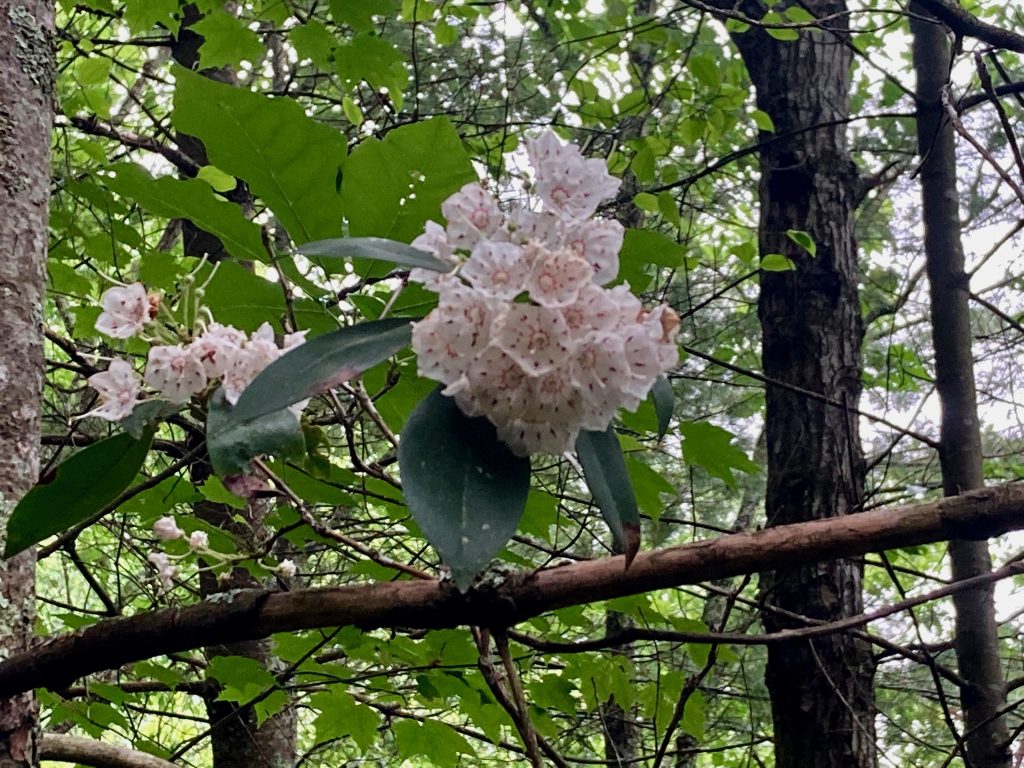 Frosty had mailed a box of food for the first leg of our hike to his buddy Sharkey’s house. Sharkey picked us up at the airport and hosted us at his house. We met his girlfriend Sweets, a two time AT thru hiker and former care taker of the Hiker’s Welcome hostile in New Hampshire. Sharkey also drove us all the way to our starting point in Damascus! 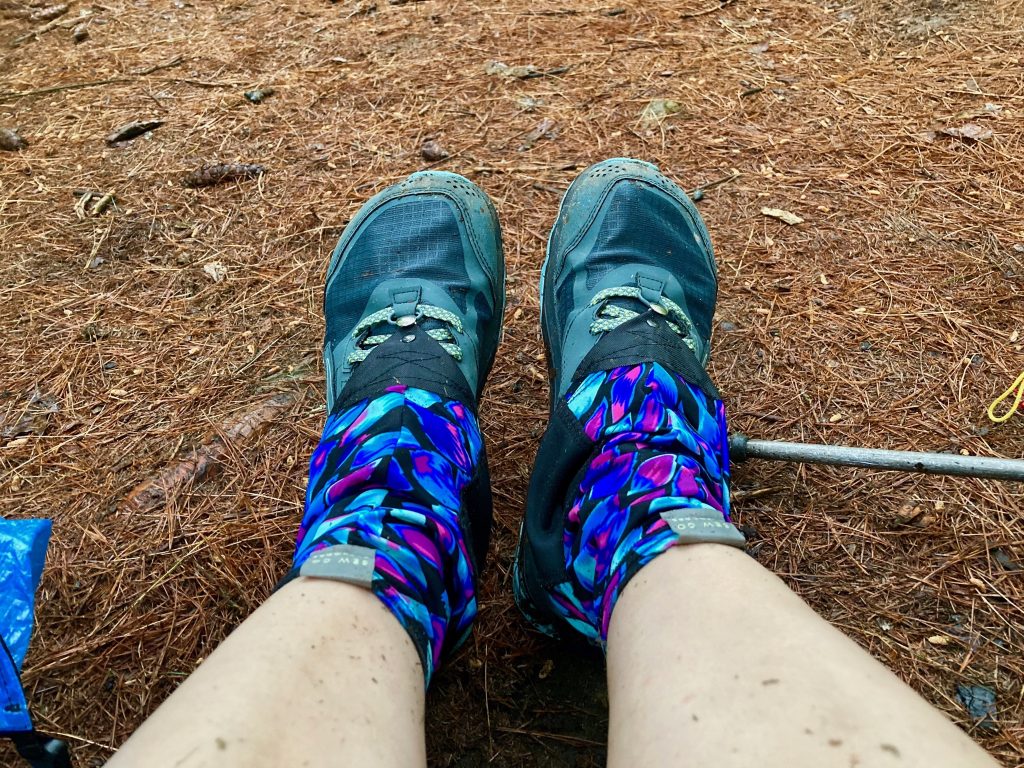 My New Lone Peaks for our LASH of Virginia

It stopped raining before we got to the shelter. When we arrived at Saunders shelter there were already five thru hikers set up inside. They had zeroed at the shelter. We met Jazz Man, Joe Dirt, Sitka, Clim-Jim, and Sunshine. 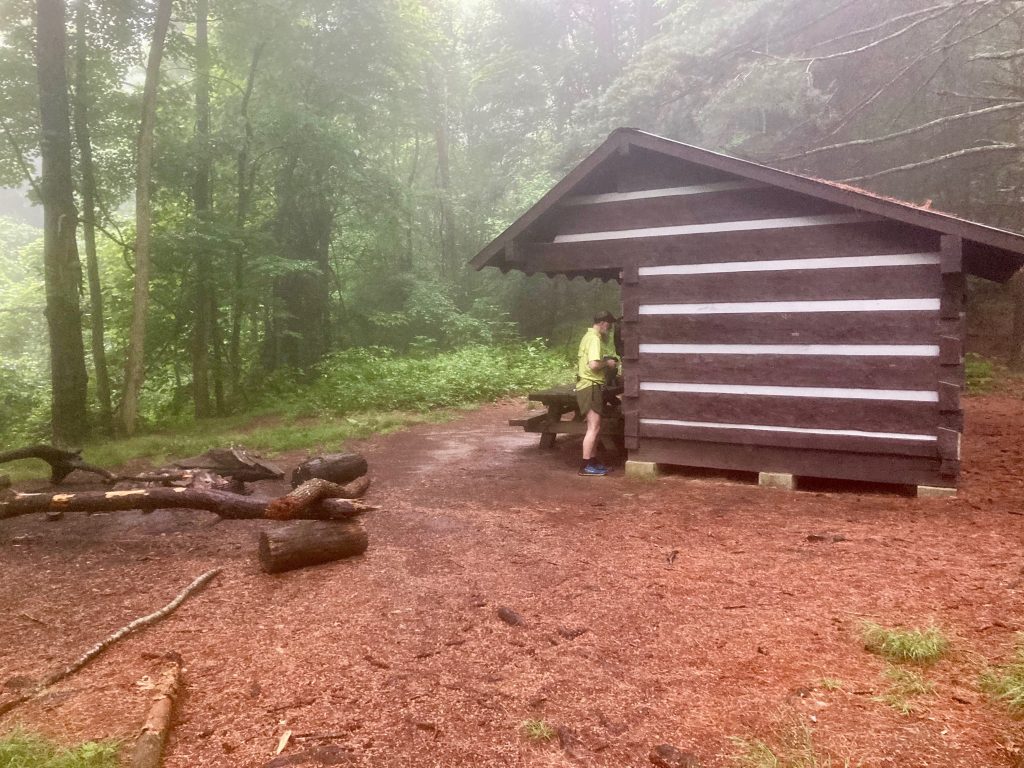 Frosty was able to set up our tent and cook before it started raining again. I gathered water from the water source for the shelter. The water source was a pipe spring a long way from the shelter, but the path was good and it was easy to find, contrary to some of the entries on the Guthooks trail app. 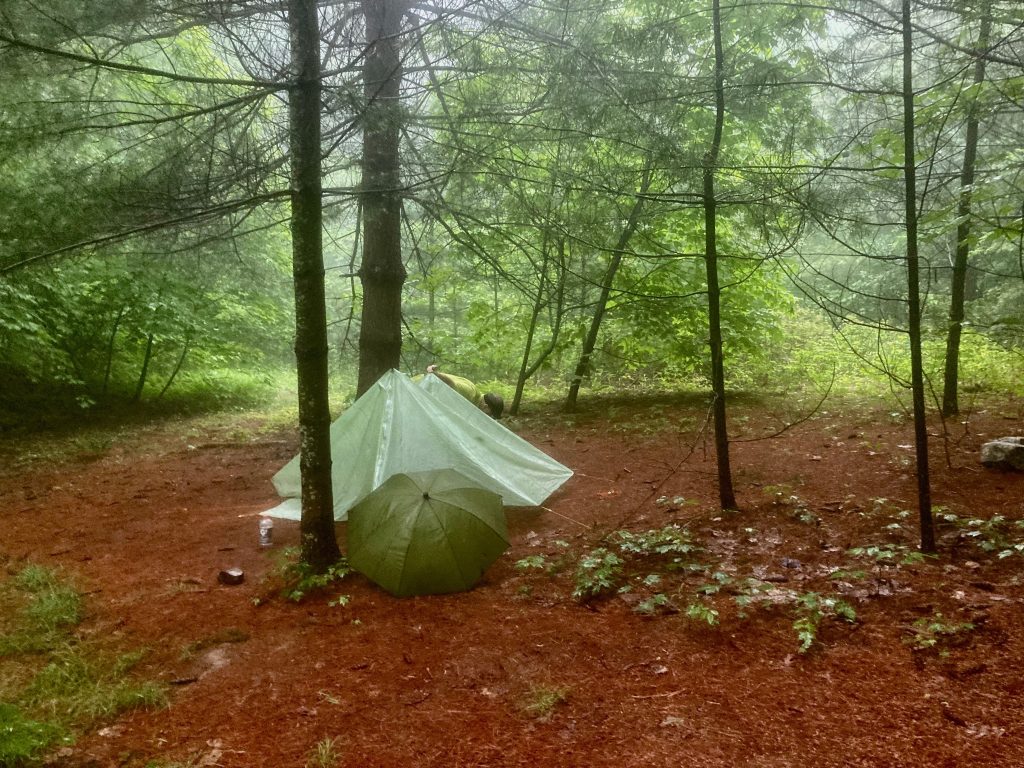 Our Tent Near Saunders Shelter

We had chili mac for supper. We ate at the picnic table under the shelter overhang and talked to the thru hikers. Another guy tenting and out for a week joined us later. It began to rain again as we finished eating. 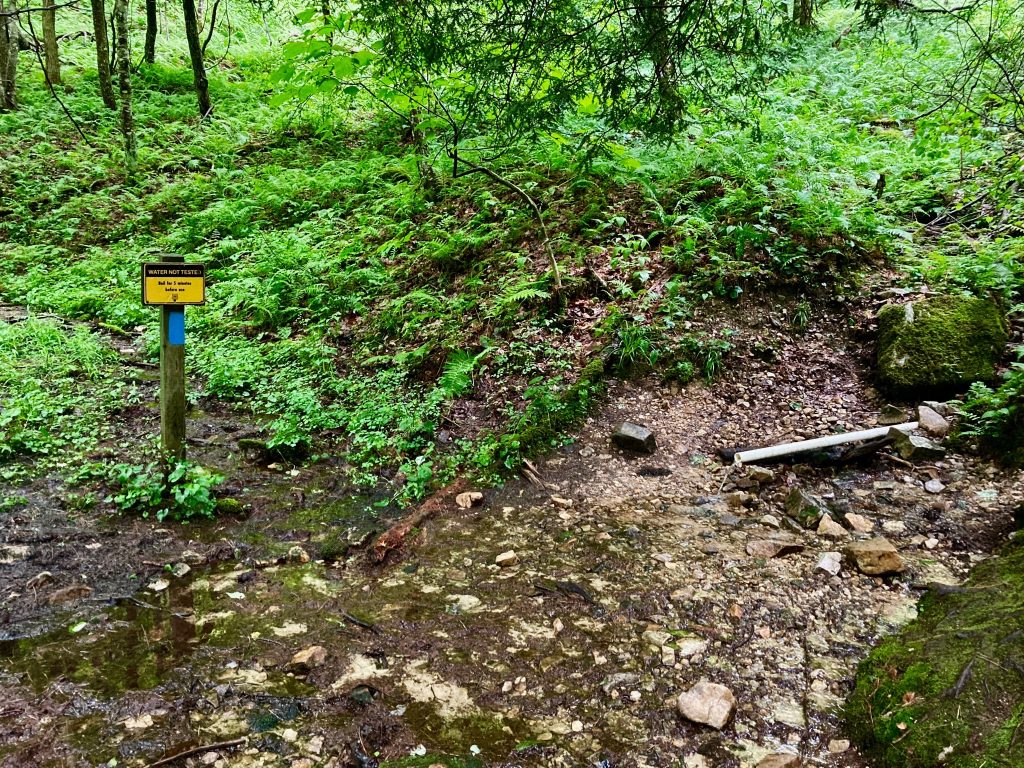 Frosty put our food bag in the bear box then we retired to the tent. We heard a couple rolls of thunder, but nothing close. We did get a slight water leak into the tent because Frosty hooked the net tent to the tarp incorrectly. A one time problem luckily. 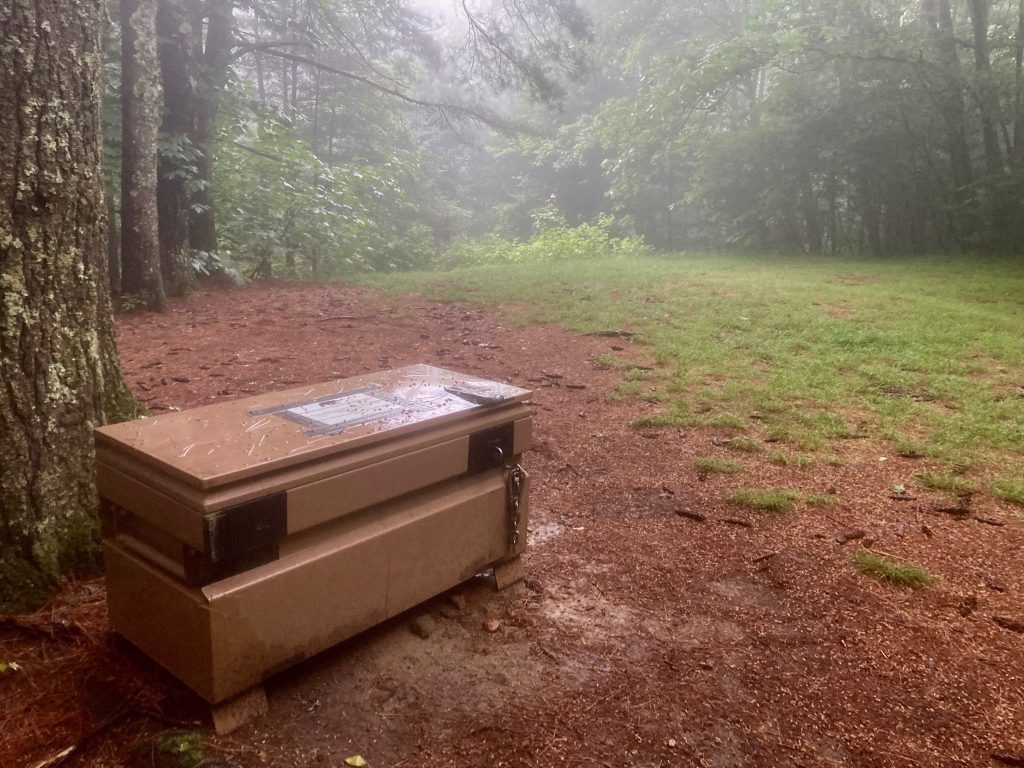 We hiked about 9.5 trail miles today. Frosty really wanted us to start slow and not push it to prevent injury. I hit my 900 AT trail mileage point today after 3 miles on trail this morning. 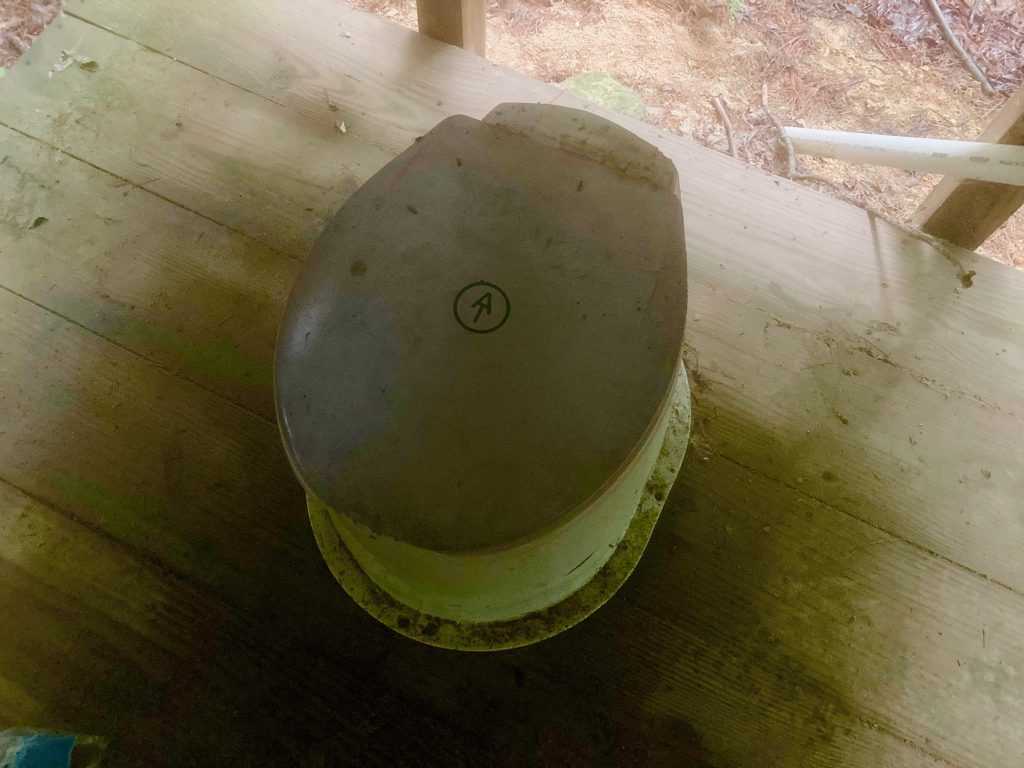 AT Symbol on the Privy at Saunders Shelter