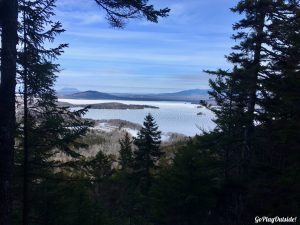 On December 31st, Frosty, Squirrel, and I went up to the Moosehead area to hike Little Moose Mountain. This is such a fun, little snowshoe trek. It is one of our favorite snowshoe trips. We snowshoe here several times each winter. Squirrel went with us today. He wanted to take some photos with his new camera. 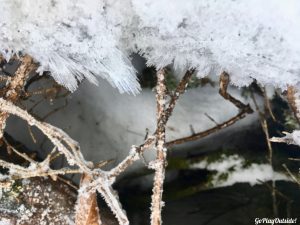 The trail was broken and well packed the entire way. The snow adjacent to the trail was covered with a crust of ice. The snow pack was less than when we went up on Dec. 1st and even a little bare in places. Rains in December had taken a toll. 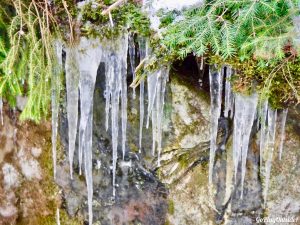 Icicles on the Ledges of Little Moose Mountain

While heading up the trail, I went to take a photo, and my camera wasn’t in its pouch. I looked around, and then backtracked on the trail. About 20 feet back, I saw it hanging from a tree branch! A tree had pickpocketed me! Unbelievable! I don’t like the velcro closure on this camera case. This cements it… I have got to find a new case. My phone often dies in the cold, so I bring my camera. Luckily, my phone wasn’t dead yet, so I got a photo of the camera hanging there on the trail. 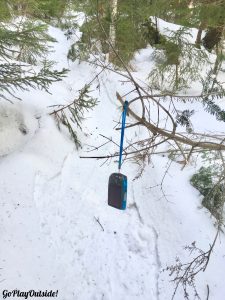 This Tree Had Sticky Fingers

If you aren’t familiar with the Little Moose trail, it doesn’t go to the summit. At around 2.25 miles, you reach the highpoint of the trail. After this, the trail heads down to some ponds and forest campsites. This is a good turn around point. This turn around spot in winter is in a wooded field/clearing-ish area. I know, that sounds odd. The area has deciduous trees, so it feels open this time of year. Before reaching this point, there are some rock ledges covered with ice. There are viewpoints along the trail in different directions overlooking the Moosehead Lake area. 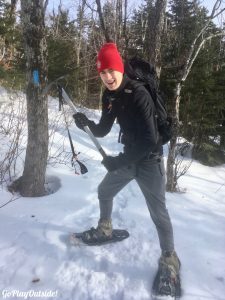 On the descent, we met a group of 5 bare booting it up the trail. This was the first time we had met other people on this trail. There seem to be more people getting out to enjoy the trails in the winter than in past years. 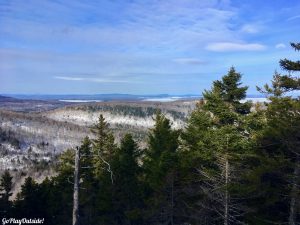 The temperature ended up being about 10 degrees warmer than predicted, and the sun came out. This meant that on the way down the snow was softer, and we sank a bit more in places. There are a few blowdowns on the trail, but you can negotiate around them. It was a great day to be out! 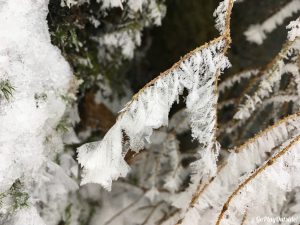