On Wednesday evening, January 16th, Frosty and I headed out to Chick Hill to meet up with the other participants taking part in the Chick Hill night hike event. There were nine of us total. Brett and Rob, from our hike up Borestone, were there. In addition, we also met Dan, Doug, Mike, Jeff and Kallie for the first time. It’s odd. Having met these people at night, I wouldn’t recognize them now. Despite the fact I spent a few hours with them. 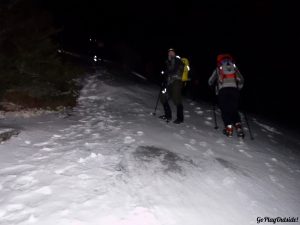 It was a bit after 6:30 when we started out. It was dark, but not as dark as you might think. The sky was cloudy, but it was a thin cloudy. So there was some moonlight, and the snow reflected the light that there was. I had a headlamp for extra visibility, but quite a few of the hikers didn’t even use headlamps.  I had been a little paranoid (nothing new there) about the dark, since it was my first night hike. My headlamp is rechargeable, so I was also worried that with the cold the battery would die like my phone battery does. It didn’t. I was covered anyway. I brought 2 (!!!!) back ups. My head lamp lasted for the whole hike and showed no signs of dying. 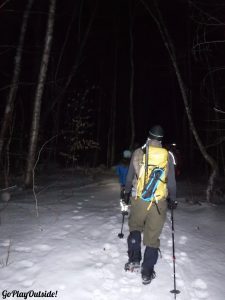 Trekking Through the Woods

Since there wasn’t much snow, Frosty and I wore microspikes. We went up Little Chick Hill first. I was definitely feeling how out of shape I am. It started out steep. I was huffing and puffing up the hill. Frosty and I had been up Chick Hill several times, but never Little Chick Hill. Wow! There were some cool views of the surrounding landscape. You could see the distant lights of towns and the headlights of vehicles traveling along route 9 below. Doug and Brett shared stories of going in the cave on Little Chick. 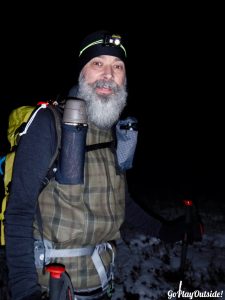 Frosty Waiting Patiently for Me

As we went back down the other side of Little Chick, it was steep. My fear of falling kicked in a bit as I carefully walked down the hill. Rob was acting as the sweeper and patiently waited for me. 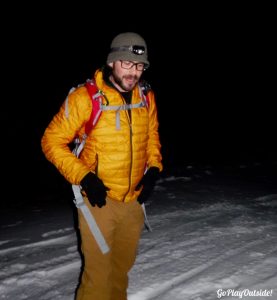 Then we headed up big Chick Hill. We didn’t take the road. Which I was glad about, it wouldn’t have been as fun. We went up some more steep sections. The snow in this area was covered by a crusty layer of ice. In some places, there was enough snow that my foot sunk 4 to 6 inches. But throughout the hike today, most places had 2 inches of snow or less. 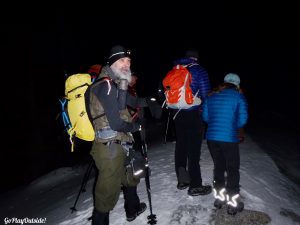 On the Chick Hill Night Hike

I was so surprised. I couldn’t believe how fast we got to the ledges below the tower. I thought it would take longer at night. The ledges had a thin layer of ice. You could walk in the snow on the edge of the ice, as well. My microspikes held firm. The wind picked up being out in the open on the ledges and at the top. 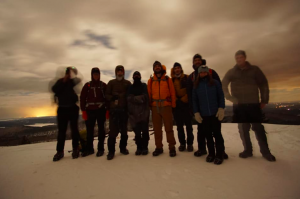 Our Group Photo at the Top of Chick Hill. I Can’t Believe How Dan’s Camera Made the Photo Look Like Daytime. Photo by Dan Kircheis

At the top, everyone who didn’t have warmth layers on quickly put them on. We stopped for a photo and to check out the views of lights from distant towns and the red, blinking lights from rows of windmills. I had to work on my headlamp etiquette. At first, people would talk. I would turn to look at the speaker and blind them with my headlamp. I finally figured out that I needed to shut my headlamp off when we stopped to talk. 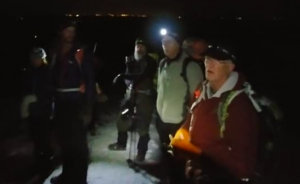 Another Photo from the Top Photo by Dan Kircheis

Before we left the top, light snow flurries started. You could only see them if you had your headlamp on though. They looked cool! On the way down, we took the road. It was a fast and easy trip back to the vehicles with time for conversation. At the vehicles, some of the people left quickly. While, some stayed to talk some more and rehydrate.  ; )

Nice write up, I had a blast, thank you!
Doug