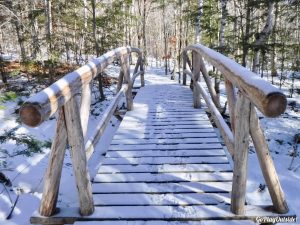 Bridge at the Start of the Stuart Gross Trail

Saturday, January 12th, Frosty and I headed to Great Pond Mountain. We drove on the Don Fish Road to the Dead River Gate parking area. We planned to end our hike here, so this is where we parked. The road was icy under a thin layer of snow which was worn away in the tire paths. 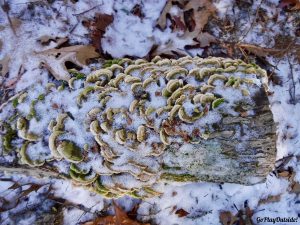 It was a cold day. The temperature was 9° when we parked. I forgot to check the temperature with the wind chill, and there was wind. We bundled up and put on our microspikes to head out. We walked up to the Mountain Trailhead parking spot. 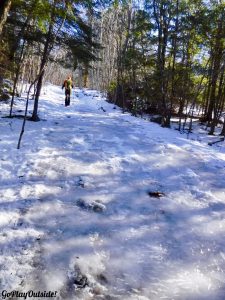 A Thin Layer of Snow Covered an Icy Trail

The Stuart Gross Trail was icy. In most places, the ice was covered with a thin layer of snow, but there were areas where it was bare. In some of the bare areas, you could walk on the edge of the trail to find a little snow for traction. My microspikes definitely helped me. I didn’t slip at all. I still avoided the bare ice, if possible, since my trekking poles didn’t like the bare ice spots. They would slip. 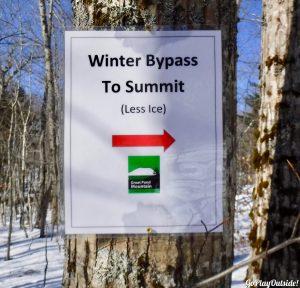 There were two alternative trails to avoid icy spots. The first bypass trail was short. The second, the Overlook Trail, was much longer and brought you to several little viewpoints. I really enjoyed this bypass trail, such great views! 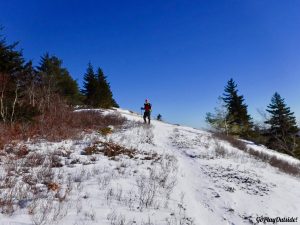 Heading up the Overlook Trail

We did miss where the Overlook Trail headed back up to the ledges below the summit. Frosty realized that we should have turned, so we backtracked a short distance and headed up to the ledges. 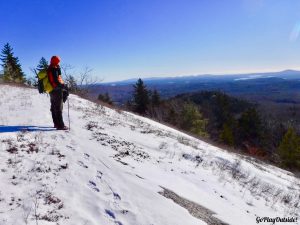 Frosty Enjoying a Viewpoint on the Overlook Trail

Frosty stopped behind a tree, using it as a windbreak, while he put on some wind layers. I already had my wind layers on and didn’t need any more layers. Frosty put on his Copperfield Wind Shirt and Enlightened Equipment Snow Wrap. The Snow Wrap added warmth and wind protection without overheating. Frosty had the Snow Wrap buttoned all the way down. He thought it might limit his mobility on big steps, but he didn’t notice it at all. 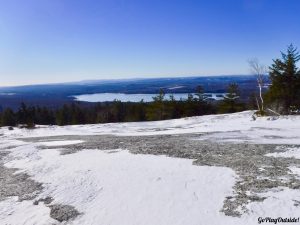 There was great view from the ledges just below the summit. If you look closely in the right direction, you can see the towers for the Penobscot Narrows Bridge. After the ledges, we hiked the Summit Loop Trail. The summit doesn’t have a view. We headed back down the ledges and the Overlook Trail. 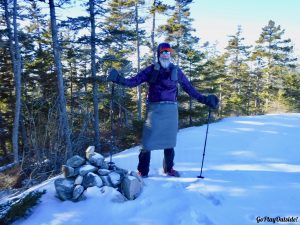 On the way down, we met a couple guys in their early sixties heading up the trail. The guys had bare ears, no hats or ear bands! Holy cow! I couldn’t have done that. It was too cold to have your ears exposed. I was SO bundled up! In the past year, I have had basal cell carcinoma on my nose and the surgeries to deal with it. But now, the left side of my nose is sensitive to the cold, since the nerves are a bit messed up. I hope this will get better with time. 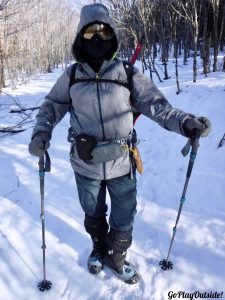 In the meantime, I have to make sure my nose is covered.The annoying part is that every way I have tried to cover my nose has resulted in fogged up lens. Today I tried some goggles that were supposed to be anti-fog. The lens pulls away from the frame to allow air flow. They still fogged up, but at least it was only halfway. Still, it was annoying, but my nose was warm. 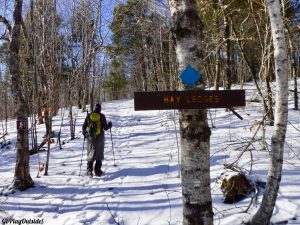 Frosty on the Hay Ledges Path 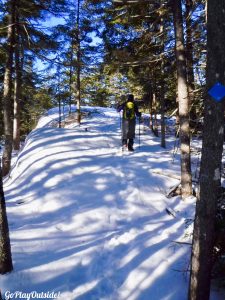 Frosty on the Summit Loop Trail

Frosty wore his Yama Mountain Gear Insulated Pogies. Frosty loves his rain mitt Pogies. When the Insulated Pogies came out, Frosty had to try them. He really liked them. Frosty thought they had the right amount of insulation, and they actually stayed in place better than the rain Pogies. If you needed your hands to scramble or if you needed to use an ice ax, they wouldn’t be convenient though. 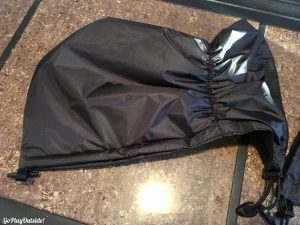 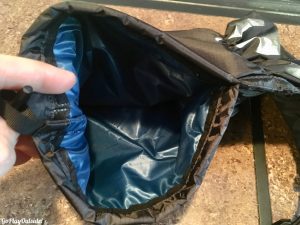 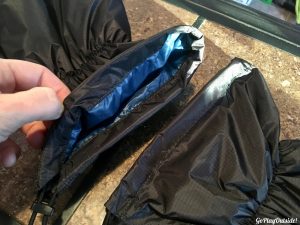 Your Hand Goes in This Opening. It Cinches Around Your Wrist with a Shock Cord.