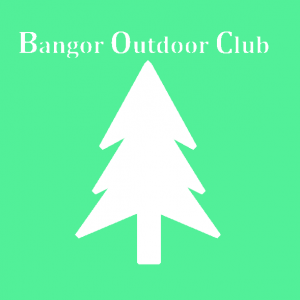 The Bangor Outdoor Club Can Be Found on Facebook and Meetup

On Saturday, January 5th, Frosty and I drove up to the Borestone Mountain parking lot to meet up with a group from the Bangor Outdoor Club. As we were driving, we saw a shooting star. A good sign for the day! 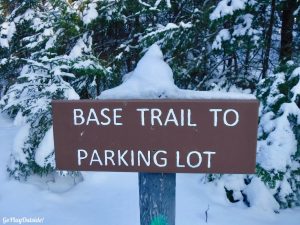 Sign at the Upper End of the Base Trail

We met Rob and Brett who are the leaders of the Bangor Outdoor Club. We also met Nate M. and Nate C. 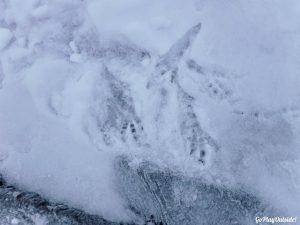 Large Bird Footprints on the West Peak of Borestone. I Wish I Had Put Something in the Photo to Show Scale – Maybe Turkey Vulture?

We headed up the Base Trail. The trail was a well packed boot trail through the forest. The snow pack wasn’t deep. Some of the group wore snowshoes and some wore microspikes. Frosty and I had our snowshoes on. We played the layers game throughout the day. Soon after starting, the group stopped to take off some of their warmth layers. 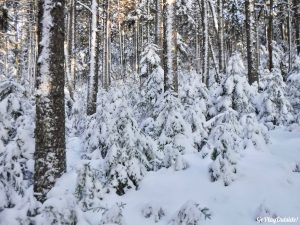 Snow Laden Trees on the Base Trail of Borestone Mountain

The Base Trail was so pretty. The evergreen trees were laden with snow. The sun actually peeked out for a little while. The snow frosted forest looked magical as the rays of lights shone through the trees. 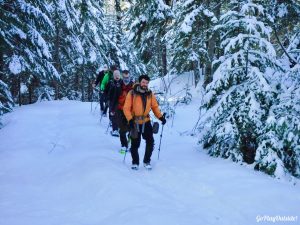 Front to Back: Brett, Frosty, Nate M., NateC., and Rob 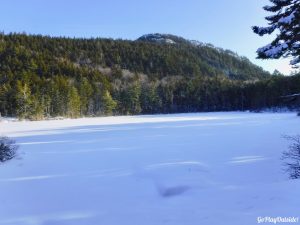 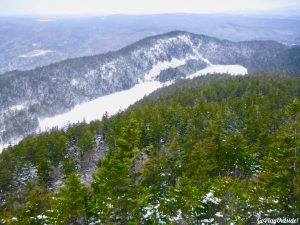 View of Midday and Sunset Pond from the West Peak

As the group leaders, Brett and Rob kept an eye on everyone and offered help as needed throughout the trip. They were particularly attentive as we headed up, and later down, this tricky section. 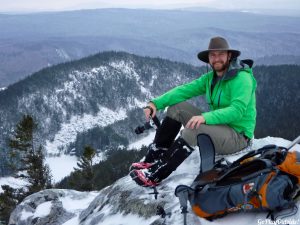 Nate C. on the West Peak of Borestone

The view from the ledges and the West Peak were super. We stopped for some photos; then headed onto the East Peak. The snow pack from the West Peak to the East peak varied a lot. Some places were windswept, bare or icy rock. In other places, the snow had collected and was deep. I sank into my mid-calf to knees. In most places though, it was a few inches over ankle height. 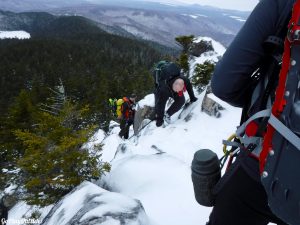 When we reached the East Peak, we put on warmth layers and stopped for snacks.The views were incredible. Then we headed back down.

View of Lake Onawa from the East Peak

As we were headed down the area near the second steel railing, we met U-Turn. That’s her trail name. I didn’t catch her actual name. She had intended to meet up with us earlier for this hike, but she had furnace problems. So she got delayed. 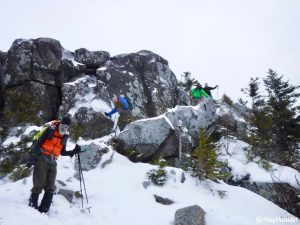 The Group Descending in the Area Between the Two Railings

After the railings, there was a tricky to descend section. Brett set up a rope to the side of the trail to help everyone descend. I attempted to go down the trail because the rope freaked me out, but I got stuck. I had sat down. I was trying to scooch down this section. My short legs just couldn’t reach. Brett pulled me back up by my pack. How embarrassing! 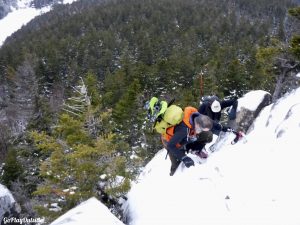 Frosty and Rob Ascending Toward the West Peak

I had to go down the rope. Okay, I was deep breathing (to calm myself) the whole time. But with everyone’s guidance, I made it down! Our whole group went down the rope. Another hiker, who stopped short of the railing area and decided to turn around, and U-Turn, who came back down after hitting the West Peak and caught back up with us, joined our group going down the rope. 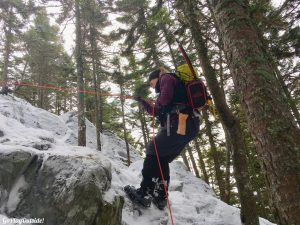 Magoo Going Down The Rope

After the rope, I put my snowshoes back on. Everyone else stayed in their spikes. After the rope, the rest of the descent was standard. Frosty, Rob, and Brett walked across the pond. The rest of us followed the trail around the pond. 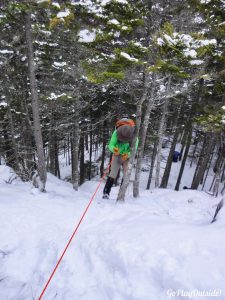 Nate C. Heads Down The Rope

We stopped again near the Visitor Center for a little conversation before heading back to the parking lot via the Access Road.