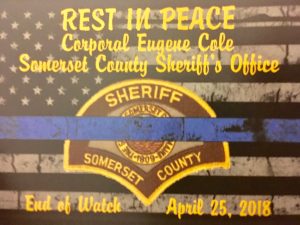 Memorial Card from the Race

On August 19th, I ran in the Corporal Cole Half Marathon. This race honored Cpl. Eugene Cole, from the Somerset County Sheriff’s Department, who was killed in the line of duty on April 25th. In addition to the half marathon, there was also a 5K. 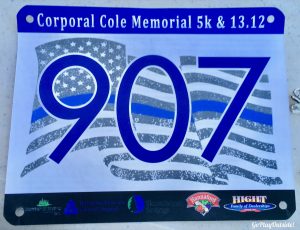 The race took place in Norridgewock. I picked up my bib the morning of the race at Mill Stream Elementary School. This was also the start & finish line for the race. The half marathon started before the 5K. 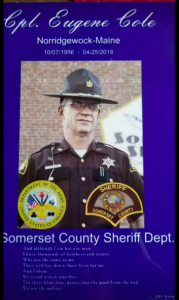 This race was very moving and filled with many personal touches in memoriam for Corporal Cole. It was very emotional. There were many law enforcement professionals running at this race. Many of the runners wore blue or patriotic themed clothing. Some racers ran with flags. 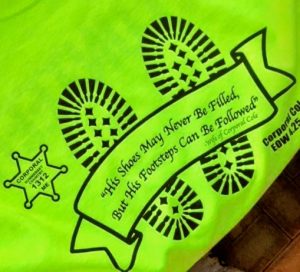 Loved the Quote on the Shirt that the Volunteers Wore

There were porta potties and the school was open, so runners could use the bathroom. That was great. Luckily, I arrived early and got to the bathroom while the lines were still short. There was also a porta potty at the mile 6 aid station, which I did have to use. 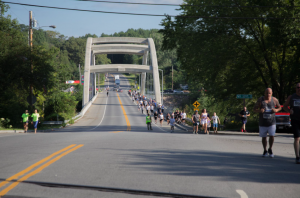 Both Distances Crossed This Bridge in Norridgewock Which Was Dedicated in October as the Cpl. Eugene Cole Memorial Bridge Photo from Maine Running Photos

The weather was sunny and too warm. This course was challenging because of the hills. My Garmin recorded the elevation gain as 851 feet. That makes it the half with the most elevation gain that I have run. My second hilliest was the Moose Pond Half Marathon in Bridgton with 774 feet of elevation gain. 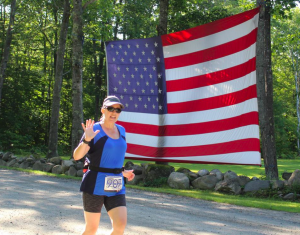 The Top of Sand Hill Photo By Holly Thebarge

The heat did take its toll on some of the runners. One runner collapsed just short of the finish line. With the nature of this race, there was a strong law enforcement presence as well as fire fighters and other rescue agencies. So, the runner that collapsed was immediately helped. He was given medical attention. Then he was helped across the finish line before receiving more medical help. 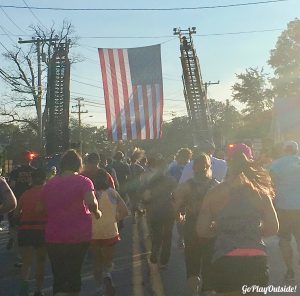 Half Marathon Runners Pass Under a 30 Foot American Flag

The race started in the school parking lot. As the course headed out onto the road, runners passed beneath a. 30 foot American flag suspended from the ladders of two fire engines. 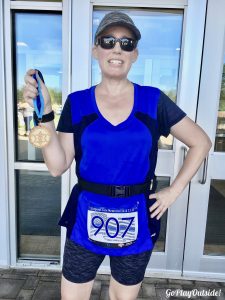 Magoo with her Finishers Medal

There were aid stations along the course about every two miles. You could get water at all of them, also some had Gatorade, Gu, gummy bears, and chicken broth. One business near the mile 6 aid station was spraying overheated runners down with hoses. 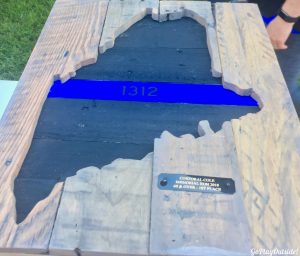 Many businesses donated goods to the race. At the finish there were granola bars, bananas, Oikos greek yogurt, individually wrapped Cabot cheese slices, chocolate milk, and Poland Springs Water. There was also ice cream: chocolate chip, rainbow, and orange sherbet. Participants also got a ticket for a free beer at a local restaurant. A local counseling group was handing out reusable shopping bags. 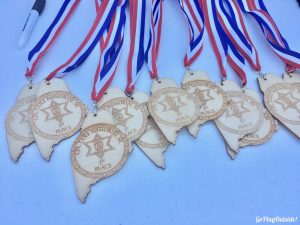 The Darling’s Ice Cream truck was there raising money through donations. The funds raised by the race from entry fees and other sources went toward a scholarship fund in Corporal Cole’s name. 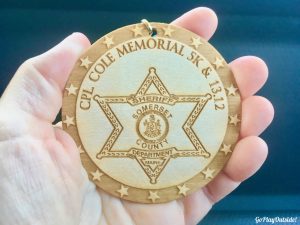 There was a DJ at the school the entire time rocking tunes and and announcing finishers. All the racers got a special medal after crossing the finish line. Along with the typical age group and overall place awards, there were special awards. A local artist made some special awards that were given to the first place law enforcement officers to finish the 5K and half marathon. An award was also given to the first male finishers that were 61 years old, the age of Corporal Cole when he died. 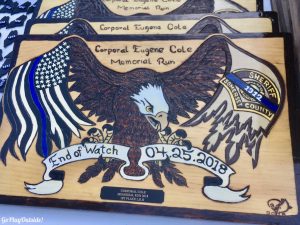 There were several times that I teared up during this race. It was filled with moving moments including when Corporal Cole’s widow, Sheryl Cole, spoke at the awards ceremony. 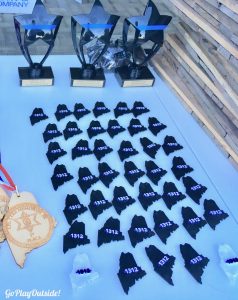 The Maine Shaped Pins Had Cpl. Cole’s Badge Number on Them

611 runners and walkers completed the 5K, and 203 people finished the half marathon.