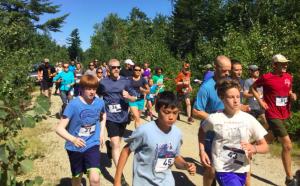 This race was hosted by Blue Hill Heritage Trust. It was held at their Surry Forest Preserve. The race was part of the Downeast Conservation Trail Race Series. 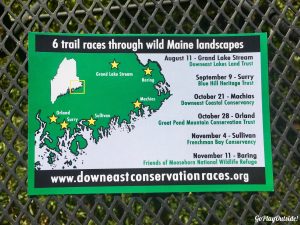 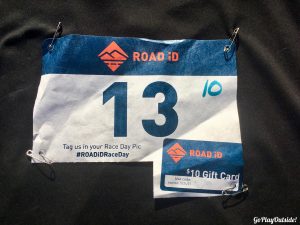 This race was entirely on gravel roads. The course didn’t feel like a trail race at all. There wasn’t any single track running or any trail like terrain.

The weather was supposed to be cool, but it turned out to be a warm, sunny day. It was uncomfortable running weather. I felt slow. 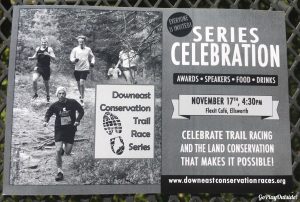 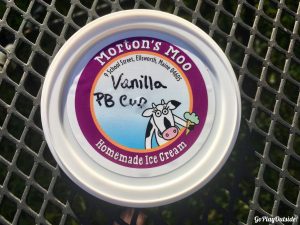 After the race, there was a post race celebration with food, prize raffles, and awards. The food included chili and optional toppings of sour cream, shredded cheese, and tortilla chips. There was also bread, cookies, bananas, carrots, water, and ICE CREAM! I love ice cream, so I was thrilled. Morton’s Moo donated their homemade ice cream. 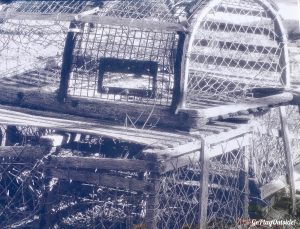 This Is the Print I Chose as a Prize. It Was Donated by Compass Rose.

The overall and age group awards were handmade. The awards were painted on mussel shells. The prize table had lots of goodies, shirts, a ceramic birdbath, many coastal themed prints donated by Compass Rose Books, and two Curious George lithographed pails. Everyone ended up getting a prize! I selected a print by Patricia Gross.

The Organizers Took a Group Photo After the Race. It’s Hard to Get a Good Picture with That Many People