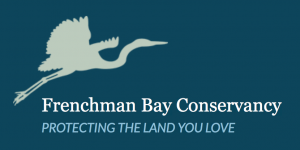 This race started and finished at Sumner Memorial High School in Sullivan. There was coffee and cocoa available at the bib pick up . Each racer was given a green buff. The course was on the Frenchman Bay Conservancy’s Baker Hill and Long Ledges Preserves and Schoodic Connector Trail in Sullivan. 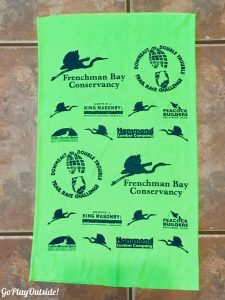 It was a windy, cold, cloudy day. The real issue was the rainstorm that happened the evening and night before the race. It had downpoured for hours with heavy wind. There were amazingly few trees down, but sections of the course were like running through a wading pool. Runners couldn’t prevent wet feet. The water was frigid, but warmed up soon. I wore wool socks to help keep my feet warm.

I decided to wear my Asics instead of my Altras for this trail race. I was wondering if the support of my Asics would prevent the back pain I had in the Great Pond Trail Race. I didn’t get the pain, but that might be just a coincidence. My Asics drained better than I thought they would, not quite as well as my Lone Peaks. 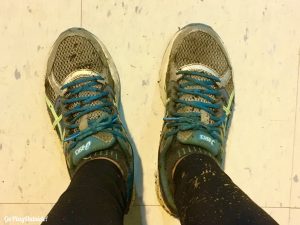 The 8 mile race started before the 4 mile race. I was really hoping to finish in about 2 hours, but that didn’t happen. I thought before the race that with the combination of trail and road that I could average a 15 minute pace. I couldn’t. My average pace was 16:40. The race was actually 8.26 miles. So I was much slower than I hoped.

This race was tough. It was very technical, roots, rocks, mud, wet leaves. There was lots of single track trail as well as dirt and paved roads. There was 802 feet of elevation gain. My feet felt like lead. I’m not sure why. I stumbled a lot, particularly in the last mile, but didn’t go down.

There were two water stops along the trail. There were some beautiful views, especially in the first mile or so heading up. 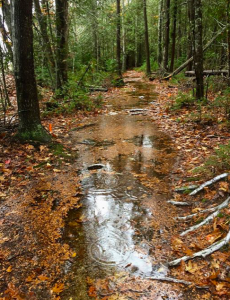 This race had a sweeper. He caught up to me pretty early on the race course. He needed to hang out at the school a bit longer, so that he wouldn’t have had to run so slowly behind me for so long. He picked up the flags marking the 8 mile race course as followed me. The sweeper was great though. He was nothing, but encouraging and positive. He didn’t pressure me at all. 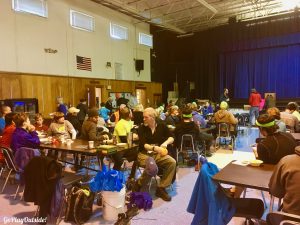 There was a post race luncheon and awards ceremony at Sumner Memorial High School. Frosty was happy. They had chili with shredded cheese to boot! I am picky about chili, so I stuck to the oatmeal raisin cookies. Not a lot of variety of food at this lunch, or at least not by the time I finished, but sustenance none the less. 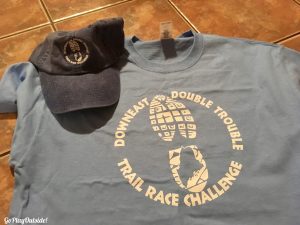 It was nice to have a bathroom to change out of wet clothes in after the race. This race kicked my butt! I was more tired after this race than most of my half marathons.