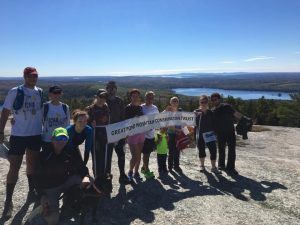 Frosty and I participated in the Wildlands Adventure Challenge in Orland, Maine organized by Strong Machine Adventure Racing. It was held on the grounds of the Great Pond Mountain Conservation Trust. We signed up for the 3 hour beginner’s race.This race involved hiking and paddling. Originally, there was an 8 hour adventure race planned as well, but it was cancelled due to low registration numbers. The 8 hour race would have had mountain biking as well as the hiking and paddling. 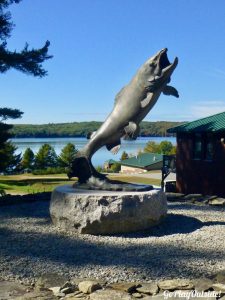 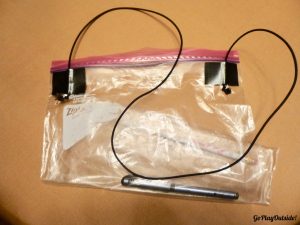 The mandatory gear we packed (one per team):

The mandatory gear we packed (one per person):

We packed all the items listed above. Below are some specific details on some of the items.

Notes on the mandatory gear:

Frosty and I each used a Cabela’s Merritt Hydration Pack. Our packs had bladders to hold the recommended amount of water. For a waterproof jacket and warmth layer, Frosty and I both packed Frogg Togg coats. Frosty packed iodine tablets to meet the water purification requirement. We had water with us and the time period wasn’t long, so we didn’t anticipate needing to use the tablets.

There was also some recommended gear on the email link:

Notes on the recommended gear:

I wore pants. Frosty wore tights and shorts. I had a hat and sunglasses. Frosty wore his goggle sunglasses. I had bug spray, but it wasn’t buggy. I brought and wore sunscreen. Frosty made a MYOG map case with a gallon size Zip-Loc bag, Gorilla tape, and shock cord. We put our phones in two Zip-Loc bags and hoped we wouldn’t need to put that waterproofing to the test. We had a small bit of duct tape in our first aid kit.

All the paddling gear was provided. This included kayaks, paddles, and life vests.

There were prohibited items: 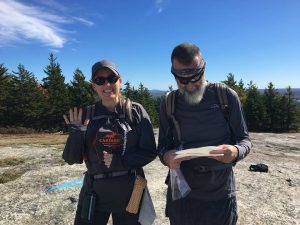 Frosty Checking Out The Map

I wasn’t sue what to expect from this challenge. I thought we would be bushwhacking through brush and using compass coordinates. I had no idea what we would be trying to find maybe tags on a tree or special blazes?

I wore a long sleeve shirt and long pants to protect against the brush for the bushwhacking I anticipated. I was a little too warm in this outfit during the first part of the race. I was regretting wearing long clothes, since we didn’t bushwhack. But, it was windy out on the water while kayaking, so it ended up being a good choice. 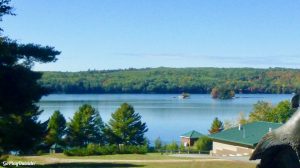 We drove to the Craig Brook National Fish Hatchery in Orland to sign in for the race and sign the release from liability forms. An example of the checkpoints that we would be looking for was hanging on the door. The checkpoints looked like mini windsocks and were orange and white in color with a punch hanging down. There ended up being 5 teams and one solo participant in the challenge. We all piled into two vehicles and drove to a trailhead. 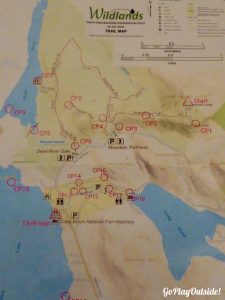 Race Map with the Checkpoints Highlighted

All the participants, as well as Shawn from the Great Pond Mountain Conservation Trust, plus Cliff and Kate – the organizers of the challenge, hiked together to the ledges just below the summit of Great Pond Mountain. This was the starting point for the race. The challenge started at 1:40 once we had all made it up the mountain and took a group photo. 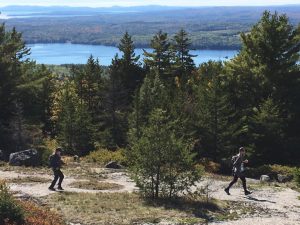 Frosty and Magoo on the Course 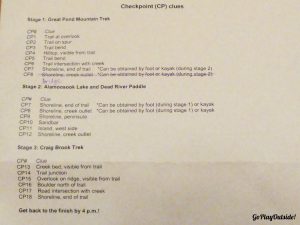 The last stage, The Craig Brook Trek, with six checkpoints was another hiking section. There were 18 total checkpoints possible to find during the race. The challenge had a 3 hour time limit. The participants had to be back by 4:40. Scores were based on how many checkpoints found. If teams found the same number of checkpoints, the tie breaker was who was faster returning to the finish.

This Checkpoint Could Be Accessed By Foot or Water

At the start line, on top of Great Pond Mountain, maps and rules were handed out with a little time to study them. The rules were also explained. In addition to the maps, we were given a list of clues. For example, the clue for checkpoint 2 was “trail on spur.” The clue for checkpoint 11 in the kayaking stage was “island, west side.” We realized after getting the map that we wouldn’t really need to use a compass. 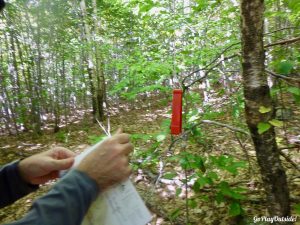 Punch For The Passport

The first checkpoint was near the start. Everyone headed there right off the bat. Each team and the solo participant had been given a race passport. This was the proof teams had found the various checkpoints. Checkpoints within a stage could be found in any order participants chose. When a team found a checkpoint, they used the small pin punch attached to that checkpoint to punch the corresponding grid box for that checkpoint on the passport. Each checkpoint’s punch had a different design. It was of utmost importance not to lose your passport. 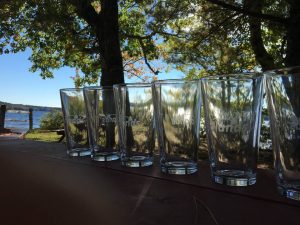 The second checkpoint was part way down the mountain. It was right on the trail, but Frosty and I had it in our heads that it would be hidden, so we wasted time looking in areas adjacent to the trail for the spur mentioned in the clue. We went off trail to look behind trees and boulders. After finding checkpoint 2, we realized we wouldn’t be bushwhacking. 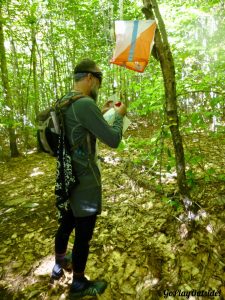 Frosty Punches the Passport at a Checkpoint

Our big decision in the first stage, was whether to get checkpoint 7 by foot or by kayak. We decided to get it by foot. We ended the first stage with all 7 of the possible checkpoints. We then headed to the boat landing to start the kayak portion of the challenge. 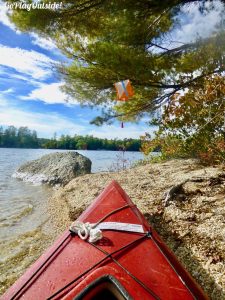 A Checkpoint on the Kayak Section

This was a hard stage for us. Frosty is skilled at steering a canoe, but the double blade paddle of the two person open cockpit kayak with the wind was challenging. The kayaking section was on Alamoosook Lake and Dead River. We fought the wind and steering problems for the first two checkpoints, 10 and 8. The water was calmer after going under a bridge from which checkpoint 8 was hanging. It was a short paddle over to checkpoint 9. Checkpoint 7 was on the calm section, but I still think it was better that we went to it by foot. It was rough getting to the island where checkpoint 11 was. We decided to bypass checkpoint 12, and head back to the boat landing. The hardest part was cutting across the lake in the wind to get back to the boat landing. We finished this stage later than we hoped. We were drier than the other teams coming into the boat landing. Some teams had waves splash up over the front of the kayak. 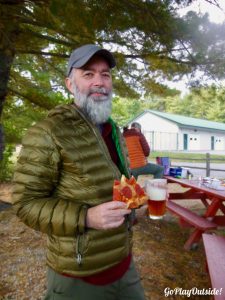 One nice part while on the water was watching an eagle soaring around above the lake. It eventually landed in a tree overlooking the lake. It looked so big and stately perched in the tree. 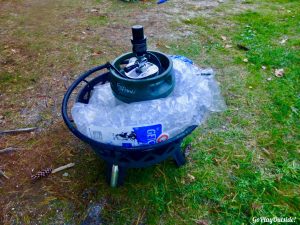 We then started the last stage, a hiking section. We found all but one of the 5 checkpoints in this stage. We might have had time to get the last checkpoint, but it would have been close. I was worried about being late for the cut off. We got into the finish area with 5 minutes to spare at 4:35 with 16 of the 18 checkpoints. Frosty and I ended in second place. 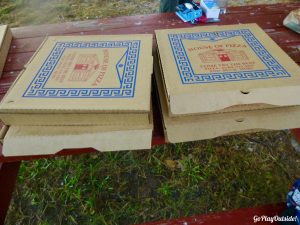 Plenty of Pizza to Choose From

After the race, everyone celebrated with pizza, chips, and beer. The beer, an IPA, was donated by Fogtown Brewery of Ellsworth. Frosty enjoyed the beer. We will have to see where it is available. Thanks, Fogtown! Each participant also got a race pint glass! 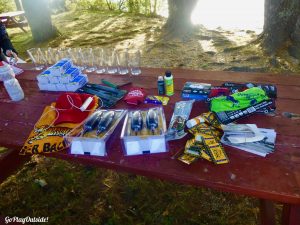 There was a prize table for the participants to choose a prize from and some free samples. Frosty picked out a Ledlenser Neo headlamp. I picked out “multifunctional headwear” from OutThere. I also picked up a sample of Tiger Balm and one of The Right Stuff, a powdered electrolyte drink to add to water. 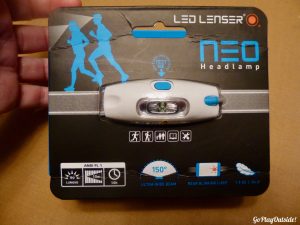 This was a fun adventure, like an adult scavenger hunt. The challenge was different and better than I expected. We had a great time. 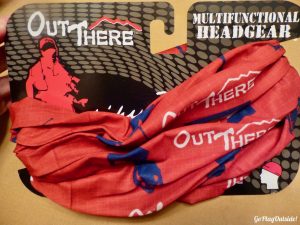 It was great meeting you guys! It was a beautiful race. If you are interested in any longer races, my husband Greg is always looking for people in the area.

It was great meeting you, too! I thought you were Superwoman out there on the course! We might be interested in some other race depending on the circumstances. We do hope to do more.