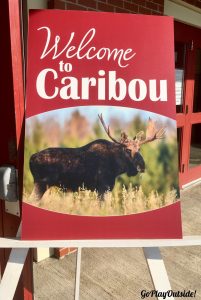 I ran in the Caribou half marathon last year, and decided to do it again this year. Squirrel and I headed up to Caribou the day before the race. I picked up my bib and SWAG bag at the Caribou Wellness and Recreation Center. With a town name like Caribou, you have a slam dunk for a logo.  This year they used buffalo plaid in the race logo, and I loved it. 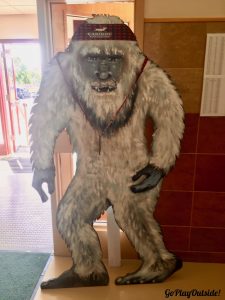 The Caribou Marathon Yeti Wearing the Buff That I Wanted!

It was so fun to check out the SWAG bag. Everything was in a string bag backpack. Yeah!  Our goodies: a pint glass from Northern Maine Brewery Company, race socks, race flip flops, sticky notes, a gel bead hot/cold compress pack (last year’s race goodies had one of these as well – and I have used it frequently), a clip-on reflector light, clip-on hand sanitizer, long sleeve tech. race shirt, and cow bell. Great SWAG choices! I was a bit disappointed that there wasn’t a buffalo plaid race buff. I had seen one in a photo on the race’s Facebook page. Being a buff fan, I was excited. But, there wasn’t one in my bag, so I’m guessing they were only for the marathoners. : ( 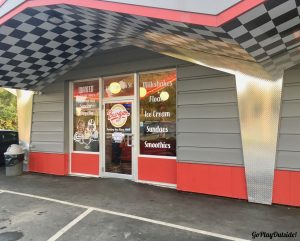 After checking into our hotel, Squirrel and I went out to eat. We went to Burger Boy.  This retro 50s themed restaurant was very busy. We put in our orders and waited. I had the poutine. It was tasty, but not next level. It could have been over the top if they had used cheese curds. I loved my black raspberry milkshake, and Squirrel loved his burger. The onion rings were great with a nice sweetness to them. Neither Squirrel nor I cared for the fries. They were hand-cut from local potatoes, but lacked crispness. They were very limp and a bit soggy. 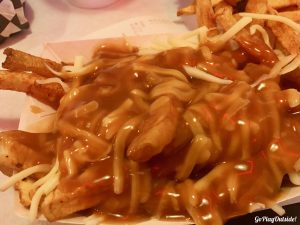 We stopped at Hannaford’s before heading back to the hotel. We flipped through the channels, but there wasn’t anything of interest to us. I wanted to try to get a good night’s sleep before the race, but that’s hard in a hotel. 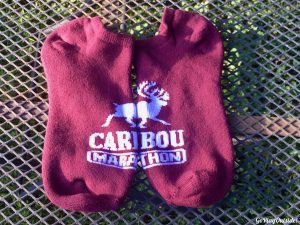 It was sprinkling before the race, so less people were milling around outside. Many were squeezed together inside the rec center. As the start time neared, I ventured out to the road. It was still misty, but it stopped just before the start of the race. 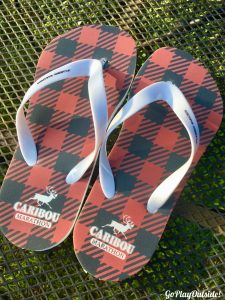 It was overcast, until just after I reached mile 5. I was thankful for this. It kept the heat at bay for awhile. This course is pretty exposed. It got pretty hot with the sun beating down on me. 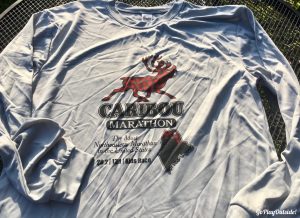 Love the Buffalo Plaid of This Year’s Race

There are plenty of ups and downs on this course. But… there is this one hill that is gradual, but LONG. It feels like it goes on forever. Plus, the home stretch is uphill. On tired legs: ugh! 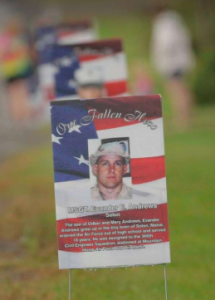 Mile nine of the course honored fallen heroes, Maine military personnel who have died in the line duty. I’m not sure of the time period covered by the memorial. It was a very moving tribute. I was sad that they were so many people who had died to protect our freedom. Each sign had a photograph, name, town, and short bio. I cried at one sign with a photo of a dad holding his baby. 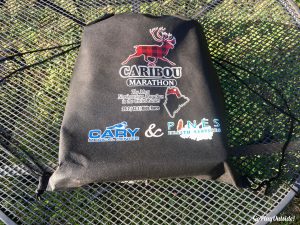 Along the course, there were people cheering on runners. Some residents cheered from lawn chairs in the driveway. Some blasted music for the racers. Some had supportive or funny signs. Squirrel cheered me on at various spots along the route. I love that the school near the finish line made banners for the racers.

Banner Made by School Children from Teague Park Elementary School 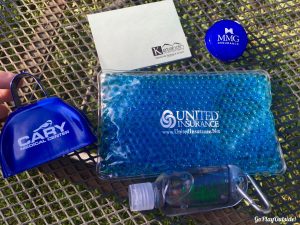 There was a bag drop, but I didn’t need it, since Squirrel was with me. I gave him my jacket just before taking off. I have used bag drops at other races though, and find them very convenient and sometimes necessary – like at Run MDI and The Bay of Fundy International. 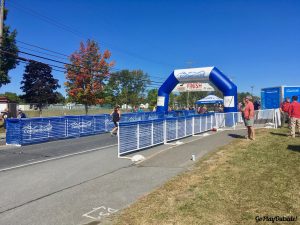 The Finish Line of the Caribou Marathon and Half

This race had a finish line announcer and music. The atmosphere was upbeat and fun. The sun was shining. Racers were done running and were ready to relax. At the finish line, there were snacks: granola bars, packs of trail mix, Cheetos, Cheez-Its, etc. There were also bottles of Enfamil. I hadn’t seen Enfamil at a finish line before, but it makes sense for the marathoners who are absolutely spent and need replenishment. I took a bottle of water. There were also bananas. 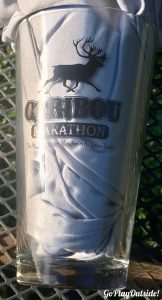 Near the finish was a large tent with more substantial food and tables. I loved having a place to sit, eat, and be out of the sun. The food available in the tent was free to runners and spectators! They had bagels with peanut butter to slather on – if you chose, baked potatoes with optional toppings including the cutest little bottles of Tabasco sauce, stew, and chocolate chip cookies. They had more bottles of water in the tent, Powerade, and maple water. The Northern Maine Brewery Company had free beer for runners in a separate area. 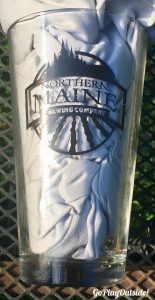 Back of the Pint Glass from Northern Maine Brewing Company

I love all the ties to the local area highlighting their famous potatoes from the food at the finish to the bags of potatoes given to runners. 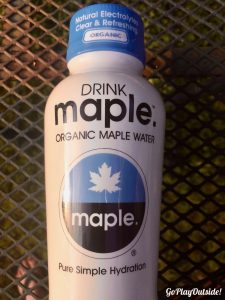 It was a great day. I felt much better after the race than I did after last year’s race. I think the cool start had a lot to do with it. The sun fried me last year. My time was much slower than last year, but it was my best half marathon time this year. I was totally shocked that I squeaked in just under 2 and a half hours. My time was 2:29:59.8. See, I meant it when I said I just squeaked in! 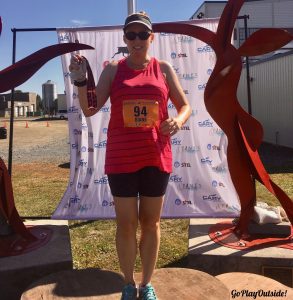 Magoo with Her Finishers Medal (Or Woodal)

On the way out of town, I stopped for another milkshake, this time salted caramel. Yum! Then we started the long drive home. I was so thankful for Squirrel driving on this trip – letting me relax! 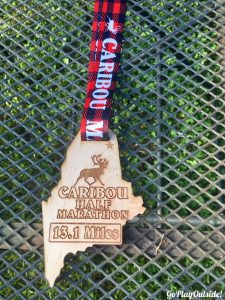 This Year’s Finishers Medal Had a Buffalo Plaid Ribbon