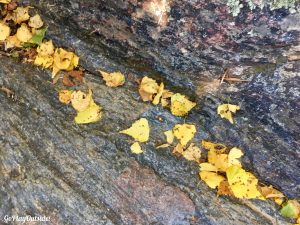 The Leaves Collected in the Crack of the Ledge

After leaving Brassie Brook, we hiked up to the summit of Bear Mountain. At the summit was a huge rock pile that we climbed up. This rock pile used to be a tower, but it is in ruins now. We sat and took in the view while enjoying our mitten shakes. Bear Mountain is the highest mountain summit in the state of Connecticut. There is a higher point in Connecticut on the slope of nearby Mount Frissell, but the summit of Mount Frissell is in Massachusetts. 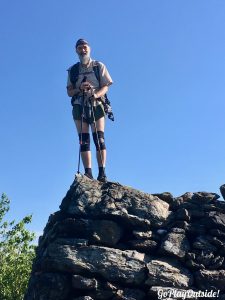 Frosty on the Tower Remnants at the Summit of Bear Mountain

We were joined by other hikers as we sat and leisurely drank our breakfast. Three of the hikers were NOBO thru hikers. Two were on an overnight trip. One of the through hikers was a girl called Rocket. She was doing big miles and moved like a rocket. 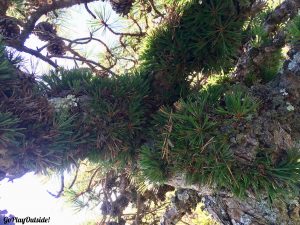 Needles Growing from the Branches on an Evergreen Tree

There was a short rock scramble descending from the summit, but then the trail mellowed out. Soon we joined up with a brook in Sages Ravine. This section was beautiful! Both of us love mountain streams. In some places, the stream cascades over the rocks. I really enjoyed the section of trail along the ravine, cool, shady, and scenic. 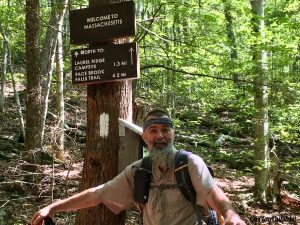 At the end of the ravine, the trail crosses the stream. This is where hikers leave Connecticut and enter Massachusetts. Yeah! Then the trail heads up again.

We had lunch at the Laurel Ridge campsite. The campsites were all deserted, since it was midday. We ate at the group campsite. There was a picnic table and three tent platforms. We spread out socks, shoes, and gaiters out to dry and put on our camp shoes. Our lunch was instant mashed potatoes with bacon bits and cheese to which we added EVOO for some more calories. 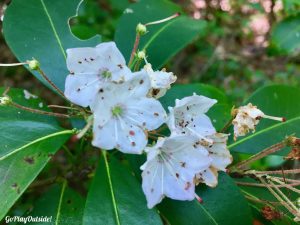 After leaving the Laurel Ridge campsite, we met a long, spread out group of girls, about 40 with their camp counselors. They were heading to Sages Ravine Brook Campsite. Some of them had had enough hiking and couldn’t wait to be done.

As we neared the summit of Mount Race, there were many ledges. This meant two things: one – some nice views, and two – we were right out in the sun. This day was HOT, HOT, HOT. Being out in the sun was brutal. Neither Frosty not I deal well with heat. Ugh! 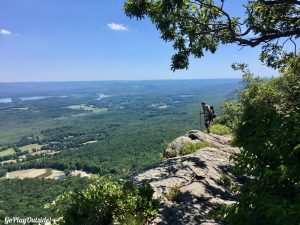 View from the Ledges on Mt. Race

Then we went up Mount Everett. Some of the steep ledges in this section had wooden box style steps anchored into the rocks. I think these would be especially helpful if one were descending this section of trail and/or the ledges were wet. We continued to trudge on through the heat. This section wouldn’t have been that difficult if it were a cool day. I couldn’t keep up with Frosty. He went ahead. 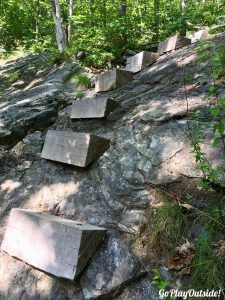 Steps up the Ledges on Mount Everett

All day we had been guzzling water to stay hydrated. Now, we were out of water. This area didn’t have many water sources at least at this time of year after the summit northbound. We knew there would be water at the campsite we were heading to in just over a mile. But it was hot, and I was thirsty! You know it’s hot and you’re thirsty when you start dreaming of ice water. 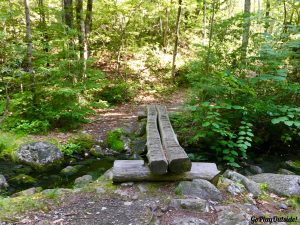 Frosty told me there was a picnic area coming up. It was 0.7 miles from the summit of Everett. Frosty said that a trail angel often left water there for hikers. I was hoping there would be water left. When we arrived at the picnic area, I saw the best sight…. jugs, and jugs, and jugs of water. Besides the water jugs, there was also a large cooler. I filled my Powerade bottle from the spigot on the cooler. I was so surprised when my hand got cold through the plastic. IT WAS ICE WATER!!!!!!!!!! I have never been so thankful for water. I almost cried tears of thankfulness and joy. 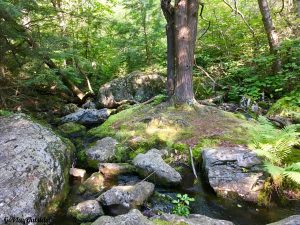 A sweet day hiker came over and talked to Frosty and I. She had been there when the trail angel brought the water and filled the cooler. The day hiker said the angel told her that she usually comes earlier in the day. I was so thankful that the angel came later today, and I was able to have ice water! I drank 64 ounces of ice water in the next half hour!

I appreciate these water angels so much. The help they give hikers especially in dry areas espeically is invaluable. Frosty came upon many in his solo hike early this summer. I had come upon two prior to this day. This was the first ice water though! 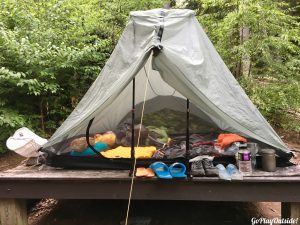 Our Tarp Tent on the Tent Platform

Our Glen Brook campsite was spectacular. It was secluded from the other tent sites. We were in the shade of some big, lovely evergreens. Glen Brook was adjacent to our site. The brook gave us some wonderful sound machine style noise. We have some logs to sit on and a stump for holding stuff. Someone strung a line that we used to dry our socks and gaiters. There was a tent platform. Our tent isn’t free standing, but someone left twine. We used that to set up our tent. 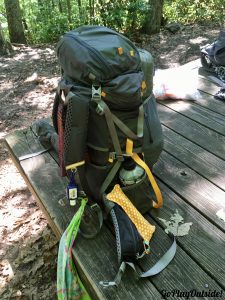 We ate at the picnic table which was in the middle of the tenting area. Our supper was chicken teriyaki. While eating we shared the table with two guys from Kansas City, Missouri. These guys were hiking southbound for a week-long vacation. They had only decided to do their hike two weeks ago. They had two days left of their hike. One of them was showing us how much food they had left. He was joking about how they brought WAY TOO MUCH FOOD. They had more food left than we carry for five days.