This is a small race through the backroads of Caramel and Levant, Maine. The conditions were beautiful! It was sunny and warm. It seemed warmer than the temperature my phone reported. There was also a nice breeze in places. I really appreciated that breeze in the home stretch. It felt so good! 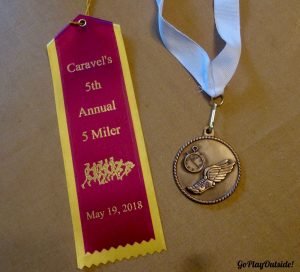 Last year, 44 runners participated in the Caravel race. This year there were 21 runners. This race had participation ribbons and medals for overall and age group winners. There were so few runners and the demographics of the participants allowed every runner to get an overall or age group award!

There were only 5 female runners, and only two of the five were adults. I came in third overall for the females. This will only happen again, if I find another race with such a small number of females! Squirrel nabbed the 3rd overall award on the men’s side, which was more competitive. K-Pop scored a ribbon for first in his age group.

After the race, there were bottles of water, orange slices, granola bars, and mini chocolate bars! An orange slice always tastes better after you’ve finished a run. 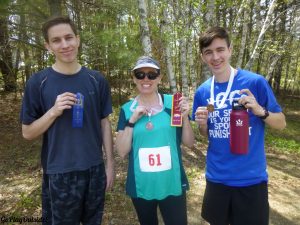 Magoo with K-Pop and Squirrel

This race was special for me because it was the first race that I have run with both K-Pop and Squirrel. This was the fifth race Squirrel and I have participated in together, and the first K-Pop and I have run. K-Pop had never run that far before!

I ran this race last year when I was in better shape and better trained. My time was better last year, but I did well this year considering my lack of preparation. Last year, I was fourth out of six for my age group, and my time was 3 minutes and 20 seconds better.

The Caravel 5 Miler is a nice distance and supports the eighth graders.The race has been run on the third Saturday in May the past two years. Spread the word we need to make this race grow!

Thanks for taking the time to read my report. It is nice little race. I hated to have to miss it this year.