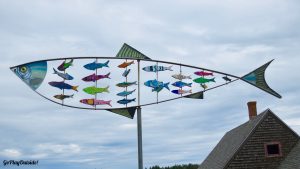 Sculpture on the Waterfront in Lubec 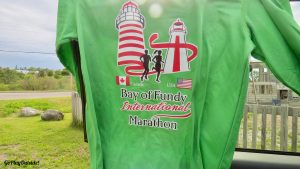 I drove to Lubec the day before the race to pick up my race shirt and bib. The shirt pick up was at the school in Lubec. The race shirts were different colors for each distance. The half marathon shirts were green. The 10K shirts were navy blue. I *loved* the navy shirts. All the race shirts were unisex, long sleeve tech shirts made by Atayne. The race posters were given out at the Lubec school as well. 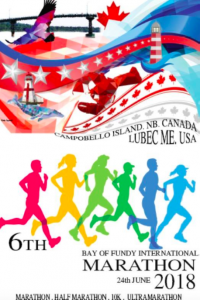 The bib pick up was at the Adventure Center on Campobello Island. As we crossed the border, runners had to tell custom agents that we were racers. Customs had to clear us, so we could run through the border during the race without stopping. Then I headed to the Adventure Center and picked up my race bib and safety pins. 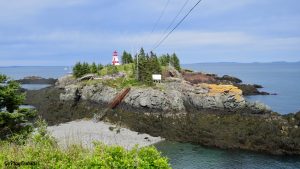 Franklin Delano Roosevelt’s summer home is on Campobello. It’s now a museum, and visitors can tour it. I have done this in the past, so I didn’t visit it on this trip. 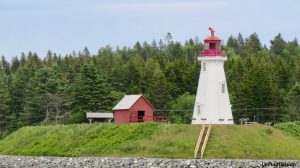 On the way off Campobello, I stopped at US customs and checked in to get cleared for racing across the border tomorrow. The customs agents asked to see my race bib in addition to my passport card. After, I walked up and down Water Street in Lubec looking at the store fronts and restaurants. That didn’t take long. There aren’t many businesses there. 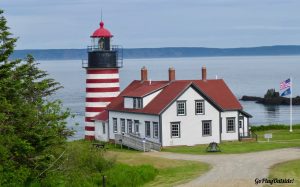 I drove out to West Quoddy Head Lighthouse. This lighthouse is the easternmost point in the contiguous United States. The 10k race, which was run entirely within the US (no passport needed) started here. After the race, the 10K runners were talking about how pretty the course was. Some people, who had run both courses over the years, told me it was a bit flatter than the course for the half.

At the Lubec school on race day, half marathoners boarded a bus that took us to the starting line area. The last bus was scheduled to leave at 7:00. I got on a bus at 6:40 for the ride over to Campobello Isdand. The school bus I rode was plush! The other school buses were standard school buses. The plush bus had luggage racks, led lights above the seats, and plush bucket seats. No sitting three to a bench seat on this bus. 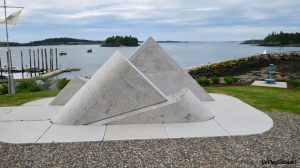 There was a bag drop at the school. Runners were not to leave any items on the bus, which had to go back through customs after dropping off racers. Half marathoners also had to fill out a Canadian customs form that was handed into a border agent as we crossed onto Campobello on the bus.

Runners were advised earlier in the week by race organizers to bring a trash bag to wear while waiting in the predicted inclement weather. These could be tossed in the trash when the race started.  Some people were in trash bags and some were in thrift store warmth layers that could be tossed. Others just wore warmer running gear or dealt with being chilly. 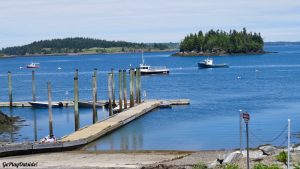 The weather in some ways was better than predicted. Earlier in the week, the weather report was calling for rain and temperatures of 55 degrees during the race. As race day got closer, the rain was moved back. It looked like we would be waiting in the rain for the race to start. Then it would clear up at race time.

As it turned out, it was cool while we waited at the start, but there was no rain. The overcast skies and cool temperatures were perfect for running. Then at mile 5 or 6, for me, the sun came out. At first, there was a nice breeze. It got too hot for me though. I don’t deal well with heat.

Mosaic on the Foundation of the Lubec Town Library

I was glad I had chosen to wear my sunglasses despite conditions being overcast at the start. I had also chosen a short sleeve shirt and shorts. I had put sunscreen on my face and neck. I ended up with a sunburn on my left arm and a spot on my neck that I had missed with the sunscreen. I hadn’t been able to check weather updates, so I had no idea that any sunny conditions would be making an appearance.

I loved the areas of the course that were adjacent to the ocean. My favorites section was run up to and back from the East Quoddy lighthouse. A lobster boat was working out on the ocean. It was really picturesque. I was liked running by one of the harbors were 3 old boats were grounded on the shore. On the inland portions, many of the roadsides were abloom with lupines. 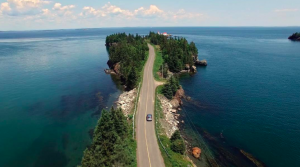 The course was very hilly. Lots of little ups and downs. There was a hill at mile 13. It wasn’t steep, but it just kept GOING. As runners neared the finish line, they had to cross over the bridge off Campobello and into Lubec. That bridge is shaped like a rainbow! I meant to take a photo of it after the race and forgot. 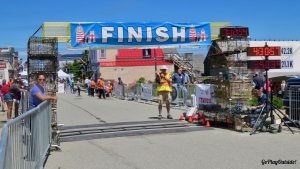 I loved that the finish line had local flair. Columns of lobster traps supported the finish line banner. I also loved the finishers medals! A local artist, Richard Klyver, handcrafted the medals from pewter. Each year the medals are modeled after local sea creatures. The Northern Cardita was the subject of this year’s medals. Local volunteers strung the medals on fishing twine that is used in the local lobster traps. Red twine is for the marathon, yellow is for the half marathon. 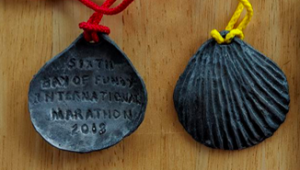 The 10K runners received a finishers medal as well. The 10K medals were made locally from cedar grown right in the area. The medals were strung on blue fishermen’s twine by community volunteers. 115 runners participated in the 10K. 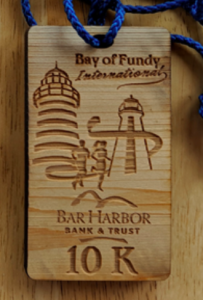 Finishers Medal for the 10K

There were 13 participants in the Ultra this year. Their finish times ranged from 04:26:16 to 07:06:36. Local potter, Shanna Wheelock, made beautiful mini-plaques for the finishers. They were gorgeous! She decorated the 2018 plaques with periwinkles. 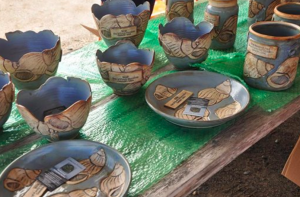 Overall winners and age group winners in the marathon and half marathon got wonderful wares also made by potter Shanna Wheelock. Shanna sold her pottery at the shirt pick up at the Lubec school on Saturday and in a booth downtown on Sunday. I loved her plates incised with fish! 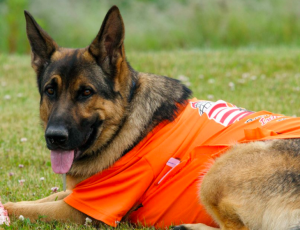 There were 278 runners in the half marathon and 124 in the marathon. An announcer heralded the finish of each participant as they crossed the finish line.

Childcare was available during the race. There was also a one mile fun run scheduled for race day morning. Other events were scheduled during the race weekend as well. At 8:00 AM on Saturday morning, there was a 5K warm up running tour of historic Lubec. There was a dinner Saturday evening of fresh, local lobsters. Spaghetti was available as well. This meal was held on Campobello Island at Herring Cove Provincial Park. 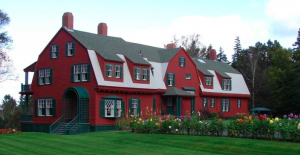 On Monday, there was a slow pace recovery run on Campobello Island and a special program for runners, “Tea with Eleanor.” Both of these events were at Hubbard Cottage on the grounds of Roosevelt Visitor Centre.