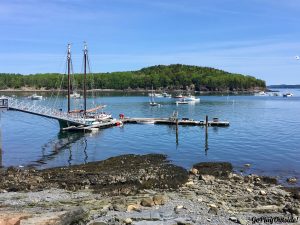 The Bar Harbor Narrows from the Shore Path near Agamont Park

On Sunday, June 3rd, I ran in the Acadia Half Marathon.This race is hosted by and benefits the local YMCA. There is a 10K race as well. The day was cool, which is good for running, and sunny. The views on the park loop road were awesome! I had a great time at this race.

I am a slow, non-competitive runner. I am fine with this. I run for pleasure and health. So, I didn’t stress as 99% of the runners passed me in the first half mile. 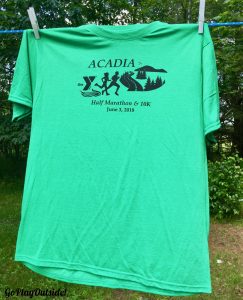 Race Shirt For The Acadia Half Marathon and 10K

At bib pick up, racers got a bag with their bibs, a race shirt,  a R.E.D.D. bar, and some tourist information for Mount Desert Island. R.E.D.D. bars are made in Maine and available at Hannaford. There were also various flavors of beverages available from Drink Maple company.

Before we got to the park loop road, I enjoyed running by the Kebo Golf Course. A fog was burning off and a couple of the trees looming over the course looked very striking. 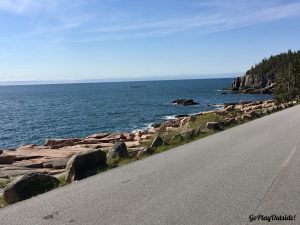 The course went under one of the carriage trail’s stone bridges. I love the stone bridges of Acadia. There were spectators on the bridge cheering for the runners.

As I walked one of the uphills, I met a runner from Texas, Kelly, who has done many Vacation Races. She has done races in Yellowstone, Yosemite, Zion, and more. She and her partner had been enjoying Maine for the previous week, hiking and rock climbing. 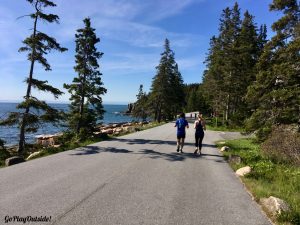 This is the first race that I stopped running to go to the bathroom during the race. I knew at mile 8 that the course went through the Fabbri picnic area parking lot and that there was a bathroom there. Flush toilets, and no line when I stopped. Score! 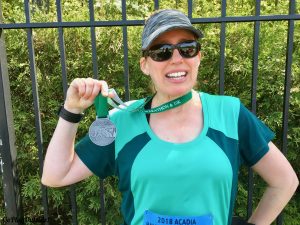 Magoo After the Race

This course was fairly hilly. There was a steep, killer hill around mile 9. I enjoyed the long downhill at mile 11. I had to stop within sight of the finish line to wait for cars to go by so that I could cross the road. The volunteers that manned this intersection were not as good at stopping traffic for runners as other races that I’ve run. Unfortunately, this threw a crimp in my “finish strong” plans.

They had an inflatable finish line with an announcer and music. There was a fun, party vibe at the finish area. All half marathon runners received a finishers medal. 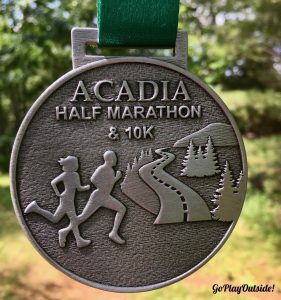 There was locally made ice cream at the finish! It was so good! The Mount Dessert Island Ice Cream Company provided the ice cream. Runners had a choice of four different flavors: chocolate, sweet cream, coffee, and cookies & cream. I chose sweet cream. It was delicious!

Other amenities at the finish area were bananas, apple slices, granola bars, water, and R.E.D.D. bar samples. 216 runners participated in the half marathon. There was also a half marathon walk which had 26 participants. The 10K had 103 runners. My Garmin recorded the elevation gain as 803 feet. 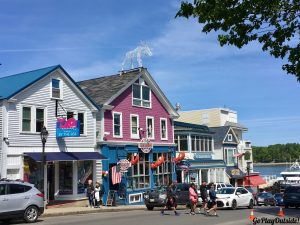 After the race, Frosty and I walked the shore path to Agamont Park in Bar Harbor. Then we walked around and went in some of the shops. A good day!