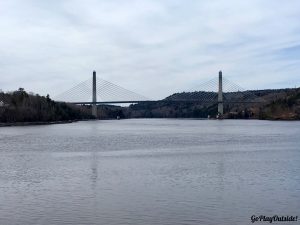 Shortly after crossing the bridge, the ten milers split off to run a route around Verona Island. The three milers ran a short route across Verona Island. Once in Bucksport, the 3 milers ran along the waterfront walkway. The course heads up to Main Street. After running for a awhile along Main Street, racers come to the finish line.

There are some great views on this race. I love checking out the views from the Penobscot Narrows Bridge and looking up at the bridge structure is incredible too. The Bucksport waterfront walkway has super views of Fort Knox. 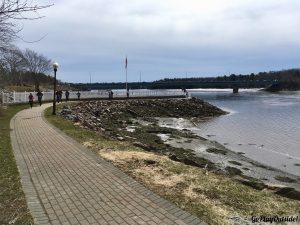 There were some logistical problems with the race this year. There was one bus that was transporting racers from the bib pickup area to the Fort area. The lines were long and backed up when I arrived at 8:50. I picked up my bib and decided not to wait in the long bathroom line in the building knowing there were bathroom options at the Fort.

After waiting ten or fifteen minutes the bus finally arrived, but I was too far back to make it on. When the bus went to leave, the exit route had been blocked by vehicles parking in non-parking spots. The bus had to slowly back up through the parking lot, out onto route 15. With traffic stopped in both directions, the bus finally got turned around and headed to the Fort.

Runners were looking at the line and doing the math. There were at least 2 maybe 3 more busloads of people waiting. Right after the bus left, a guy came up and asked if anyone wanted a ride to the Fort, since he was headed over. I immediately shot my hand in the air. I had to get to the bathroom. Three others also stepped forward after me. I was so grateful to this man.

At the Fort, I hopped in the extremely short line for the porta potty. There are flush toilets at the Fort also, but I saw the short line and took advantage.

Then began the search for the bag drop. An email prior to the race that went over logistics, said that the bag drop would be in a bus and to leave your bags near the front of the bus. There wasn’t a bus here, and I wondered if it was the same bus slowly transporting racers.

I ran into a man who told me he was looking for a silver pickup truck that was supposed to be the bag drop. He was given this information at the bib pick up. Glad I met this man or I may still have been looking for that bus bag drop when the race started. The silver pickup in question drove by us about five minutes later. 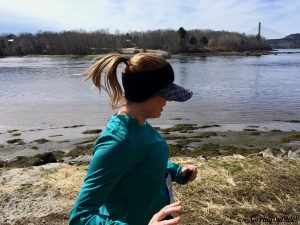 Racers Cross the Penobscot Narrows Bridge Seen in the Background

I was glad they had a bag drop. If there was one last year, I missed it. This year was colder this year, and there was a slight breeze. I kept my coat on for as long as possible. After stashing my coat at the bag drop, I walked to where the race started.

The race was about ten minutes late getting started because runners were still making their way to start. I think they need two buses transporting racers next year.

I didn’t better my time from last year. I was just under a minute off. This year though I’ve got a minor head cold and have taken NyQuil last three nights to sleep because lying down makes me cough. That’s my excuse, and I’m sticking to it. 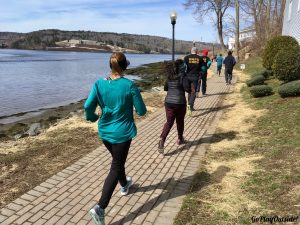 This year I registered early and was one of the runners to get a beanie. The first 300 who register or by March 1st (whichever comes first) receive a commemorative sublimated beanie at bib pick-up from Maine company, Atayne. I am guessing there are 300 registered before March 1st. About 500 racers ran in Bridge The Gap between the two distances.

Bridge The Gap does have cool race bibs with the bridge in the background and your name printed on them. Last year, I registered a few days before the race, so I didn’t have my name. 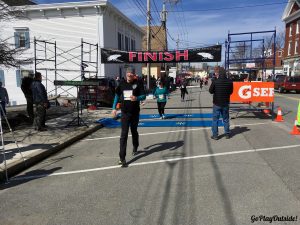 A couple days after the race. Crow Athletics sent out an email with links to results and photos. They also apologized for the problems with the bussing. Here is their apology:

Event organizers would like to express our sincere apologies to those who had difficulty getting to the start. Our race transportation worked flawlessly in 2017, and we had no reason to expect anything less this year. We are already working to ensure that this does not happen again, and hope that you are not deterred from participating in future editions of this race. Thank you for your understanding, and sorry again for any inconvenience.