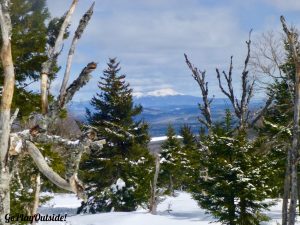 Snow-Capped Mount Katahdin Seen in the Distance from Shaw Mountain

Frosty and I got an early start and headed up toward Greenville, past Kokadjo, to the AMC‘s new Medawisla Lodge. We parked here and strapped on our snowshoes. We arrived at the parking lot at 7:15. The trail groomers had already been out before we arrived. 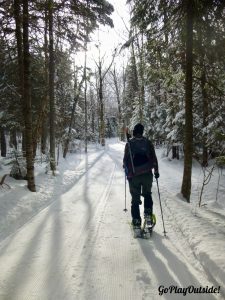 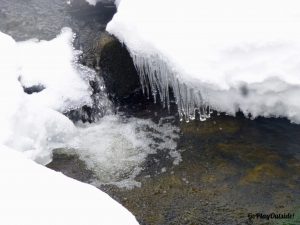 Our trip was the day after a trip by the Northwood Wellness Collective. So, the trail was broken most of the way for us. There were only a few places where their tracks were blown over. Frosty and I only had to break trail going up to the Middle Summit (2631 feet). It was overcast starting out but the sun slowly burned through After that, we were blown away by the incredible views of the snowcapped Mount Katahdin. Neither my camera or phone could compete with what we saw with our eyes. We went a little past the Middle Summit to a super viewpoint, since the summit is not above tree line. After the Middle Summit, we decided to go up the North Summit (2485 feet). The Wellness group had gone up this way. This summit isn’t above tree line either. 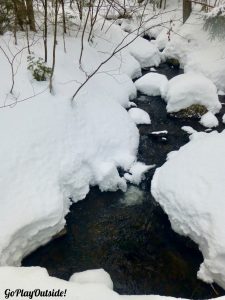 We did take one wrong turn thinking we were at the place where the trail split to go to the summits. We started following what appeared old tote road. The Wellness group had done the same thing. We did go a bit beyond their tracks and then realized there weren’t any blazes. Which was a red flag because the trail was well marked and maintained. After the Middle Summit, the trail is still under construction. There are plans to connect to other trails.

I love seeing animal tracks in the snow. And the the fresh snow did not let us down. We saw mouse, squirrel, and bunny tracks. We also saw tracks from a bobcat or lynx. The cat tracks followed or crossed the trail for quite awhile. 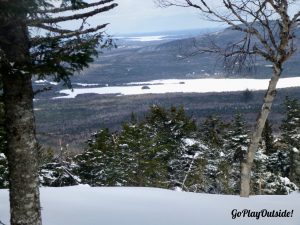 Frosty used his new pack from Gossamer Gear, the Kumo, for the second time. He loved it! He said it shines at 15 pounds, but it can carry up to 20 pounds. Frosty is loving this pack.

During the first half of our hike diamond dust would rain down upon us as the wind blew through the trees. It was beautiful. The trees on the trail looked so different later in the day. The wind had blown the snow off many of the trees. On other trees, the snow had gone from lacy outlines of the branches to clumps clinging to stay on. 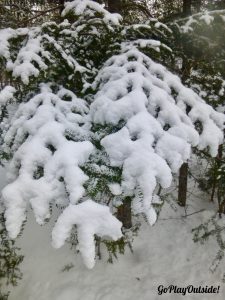 The Trees Were Lacy in the Morning

On our final mile, we met two skiers headed in the opposite direction. These were the only people we met on our trek.

We checked out the lodge after our hike. It opened this past July. The lodge had that new wood smell. I find that far superior to the new car smell that some people enjoy. After checking out the lodge, we got on the road and headed to Dover-Foxcroft. We stopped at Mission Impizzable. We enjoyed a delicious pie. We called in our order from the road, so it would be ready. A great way to top off a fun adventure. 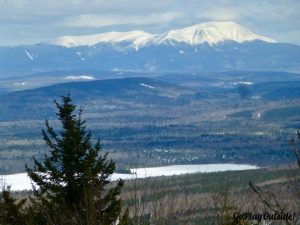 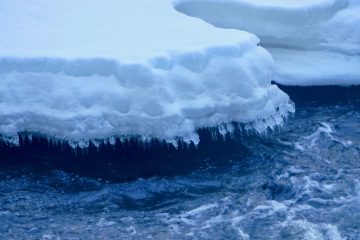