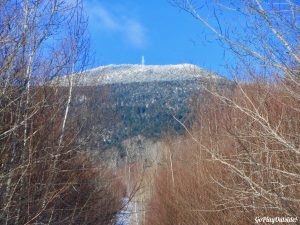 On February 23rd, Frosty and I climbed Big Moose Mountain. The North Road into the trailhead wasn’t being plowed this year, so we had to plan for that. 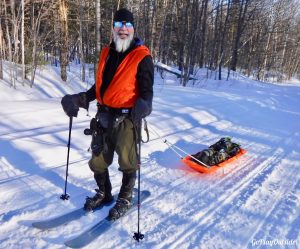 Where the North Road meets routes 15/6, isn’t a good place to park on the side of the road. We weren’t sure what we were going to do. Luckily while at the Banff Film Festival, we met a woman, Jenny, who graciously offered to shuttle us from the Junction Wharf in Greenville to the North Road. 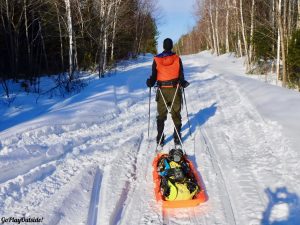 A Harness Attached the Sled to Frosty

We threw our gear in the bed of Jenny’s truck and headed out. When we arrived at the North Road, we tossed the gear up onto the snowbank and climbed up onto the road. 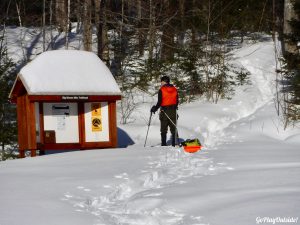 We skied into the trailhead, about 1.5 miles one way. Frosty carried our packs and snowshoes in a sled that attached to his waist with a harness. The North Road was well packed down by snowmobile traffic. We didn’t meet any snowmobiles though on our way in. 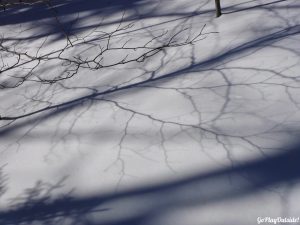 Shadows on the Snow

Once at the trailhead, we switched our skis for snowshoes and donned our packs. We left the sled and skis at the trail kiosk. 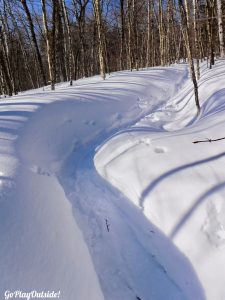 The Trail Started as a Packed down Superhighway

The first quarter of the trail was well packed. Jenny and her daughter had snowshoed in the day before, but the trail had been packed by someone before that. It was like a superhighway! We were chugging right along, but all too soon the easy walking ended. 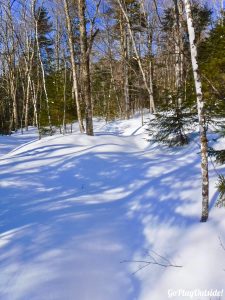 And Then the Superhighway Ended

Holy moly! This was deep powder. Frosty and I were postholing on nearly every step with our snowshoes on! I couldn’t believe how deeply I was sinking! At least a foot with each step, if not two. I was able to lead the way and break trail though, unlike on our Eagle Rock climb, because I could easily follow the trail. 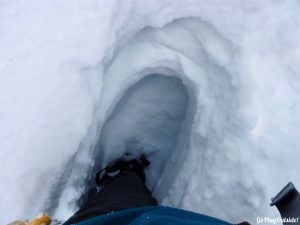 Main Theme for the Day: How Low Will You Go?

As we got closer to the old fire warden’s cabin, the terrain got steeper. The walking got more difficult. The snow was collapsing under my feet. Each step needed to be repeated two sometimes three times to stop your foot from sliding back down. 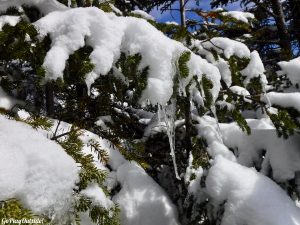 These Trees Are from Above the Cabin. You Can Tell by the Snow.

Upward progress was slow going and tiring. This was a very laborious process, but we were determined. I’m glad that we had gotten an early start to allow plenty of time to get this done. At least, I didn’t have to worry about running out of daylight. 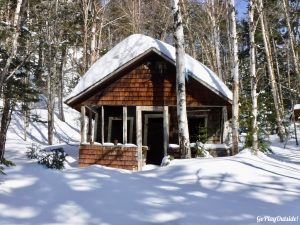 I was so happy when we made it to the cabin. This was my first goal landmark. We stopped for a water and snack break here. Fuel was definitely needed to keep our bodies going. 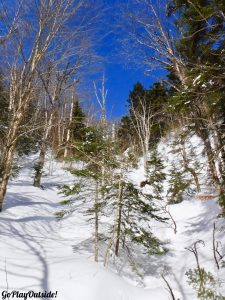 The Ravine near the Cabin

After crossing the ravine near the cabin, the trail got even steeper. This part was seriously steep. I was disappointed that I couldn’t capture that degree of steepness in the photos. Frosty was breaking trail through this section and killing it! We slowly trudged upward. At least the snow in this section had had some sun melt affecting it, so we weren’t sinking as deeply. Just slipping with the grade. 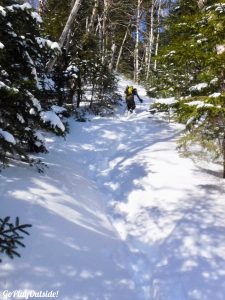 The next landmark I used to measure our progress was when we reached the trail that splits off to the scenic overlook. That came sooner than I thought. The next part though took so much longer than we anticipated. 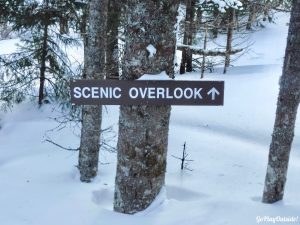 We Skipped the Overlook Trail Today!

The next section travels along the ridge to the summit. There was so much snow up there that you couldn’t find the trail. Any blazes were buried. With all that snow, we were traveling above where the tree branches are cut for the trail and to allow easy passage of people. 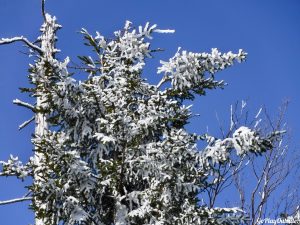 The Trees After the Cabin Were Covered with Snow

I felt like I was in one of those horror shows. The ones where there are evil trees with branches that reach out and grab people. The trees were attacking us. Many times, we pushed through the branches only to be held in place as the branches caught up on our packs. I felt like Wile E. Coyote wildly spinning my feet, but not moving forward. 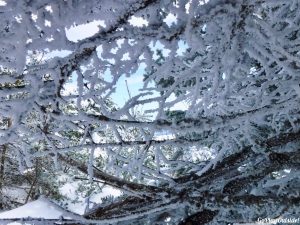 Secondary Theme: When Trees Attack (This Is What We Were Walking Through)

The trees on the ridge were more snow covered than the ones below cabin. This meant that as the trees branches were grabbing us, they were also dumping snow all over us. Since we were both in base layers, the snow soaked us. 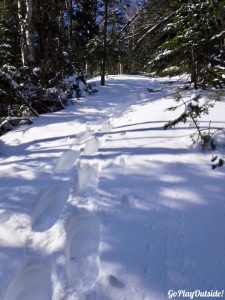 Following Frosty’s Path Before We Got to the Ridge

Although we travelled the path of least resistance, it was still a battle with the trees. I wish I had a go pro video of this section. 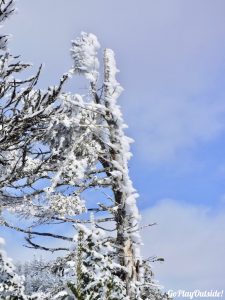 The snow on the ridge was wind packed, so we didn’t sink as much as before. We still had to cross some deep drifts though. We did sink in the drifts. In one place, I sank up to my hip! It took us so much longer to travel from the scenic outlook trail to the summit because of the conditions. 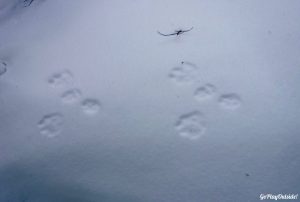 Today in the open the snow was super sparkly in the sun. It was beautiful. I love seeing tracks in the snow. All along the ridge, we were traveling next to and crossing over fresh rabbit and bobcat tracks. 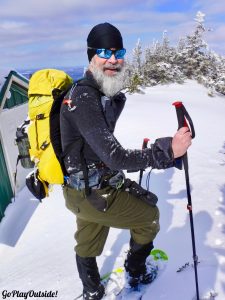 Frosty at the Summit

I was so happy when we finally reached the summit! It was so much work, but we did it! We enjoyed the views from the summit and had a snack. It had taken us four hours and 45 minutes to make it from route 15 to the summit! 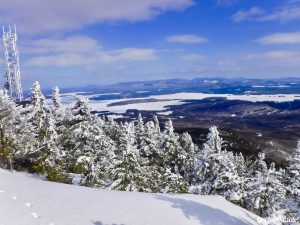 The weather conditions were great today. It was one of the warmer days we’ve been out this winter. It was sunny too. Most of our hikes this winter have been on gray or partly cloudy days. Today, it was so bright and sunny. The sky was such an intense shade of blue. It was beautiful. 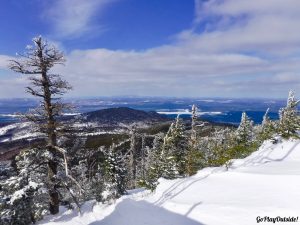 The trip down was so much faster and easier. Although, the trees on the ridge still attacked us and amazingly still dumped more snow on us! I would have thought there wasn’t any snow left to dump on us. It felt like we were flying as we traveled down, since it was so much easier. Even if we still sank some. It was so freeing not to work so hard for each step. 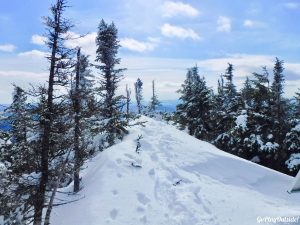 When we arrived back at the trailhead, we switched back into our skis. The packs were loaded onto the sled, and Frosty harnessed up. We skied back to the road which was mostly a gentle downhill in this direction. This time two snowmobiles passed us. 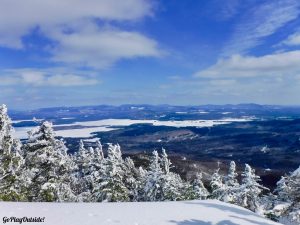 Jenny picked us up and delivered us back to our vehicle. A big shout out and thanks to Jenny for helping us today. 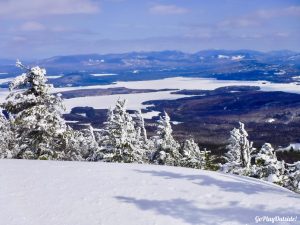 This was so much harder than our trip up Big Moose in the snow last April. The deeper snow made it much harder breaking trail, and on that trip we drove right up to the trailhead! The harder work though made the accomplishment more satisfying. 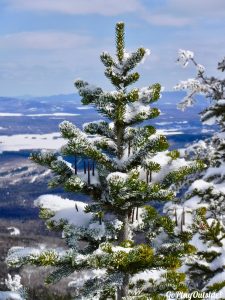 Check out These Conifer Cones!

Our trip from the summit back to route 15 took us two and half hours. My Garmin watch listed our distance as 7.72 miles.

We are definitely not minimalist winter hikers. We want to “Be Prepared” as the Boy Scouts advocate. If you want to check out Frosty’s gear list for this hike click the link below.

This is awesome! A great digest of the day. It’s a great mountain! I’m looking forward to going back again. Thanks for sharing!